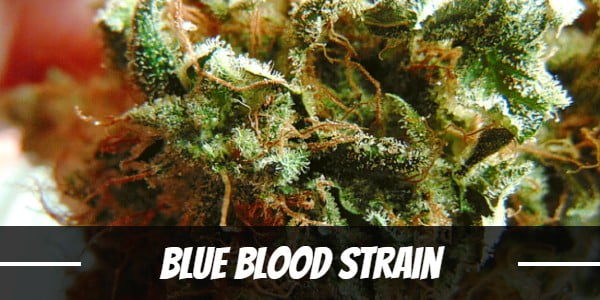 CBD, next to THC, is the most recognized compound of marijuana. While there are countless studies on its benefits, its potential remains untapped. Still, its usefulness has not stopped companies such as Medicann from developing medical strains like Blue Blood.

Blue Blood was explicitly created to cater to users with physical discomforts. It traces its lineage back to two exceptional Indica-dominant recreational strains OG Kush and Blueberry. Apart from body relaxing qualities, both are also very potent.

Instead of settling for yet another high-THC hybrid, Medicann took it to a whole new level by working on increasing its CBD level. The company never disclosed the exact breeding process. Suffice to say; Blue Blood was tested to contain as much as 10%.

Though made for the medical community, Blue Blood makes for a great recreational smoke or vape. It has more than enough THC to induce its brand of cerebral high before inducing deep relaxation.

Blue Blood is highly potent but also one that is slow acting. As such, there is a tendency for first-time users of this hybrid to underestimate its capabilities. It is best to take a hit and feel its effects before another one.

Typical with hybrids, even the ones that are mostly Indica, the mental stimulation is felt not too long after taking a toke. That is not the case with Blue Blood though. It may take up to minutes before one feels its subtle effects. And just like that, it hits hard with a numbing body buzz along with a euphoric head high.

As the waves of stimulating sensations ebb, Blue Blood now puts users in a state of complete relaxation. Finally, as the psychedelic high reaches its peak, most people are now hopelessly locked on the couch with a foggy mind.

The smell of blueberry mixes with the earthy scent of Blue Blood. At the same time, it has a sweet undertone with a hint of diesel.

Besides the citric taste of sweet blueberry, Blue Blood also has delectable hints of pine mixed with diesel. On the exhale, it leaves a spicy aftertaste.

Almost everything has its consequences, including marijuana use. The most common adverse effects are dry mouth and eyes. It may also cause slight dizziness.

At 10%, Blue Blood has one of the highest levels of CBD in the world of marijuana. Combined with its high level of psychoactive compounds and cannabinoids, the strain definitely brings a myriad of therapeutic benefits to the table including pain management.

As an analgesic, Blue Blood has the ability to soothe the sharp stinging pain that comes with involuntary muscle spasms and continuous contraction. It may also be used to appease joint pain and arthritis. Not only that, but it also eases inflamed areas while reducing redness and swelling.

Besides the physiological benefits, the Indica-dominant hybrid also relieves symptoms of depression and PTSD. Inducing a relaxing happy high, it allows users to slow their negative thoughts down so they may look at life positively. This combination also makes it great for those with anxiety. At the same time, it can also be used to bust out stress.

Regardless of what one uses it for, using Blue Blood usually ends with users falling into a deep slumber – an invaluable benefit to insomniacs.

Unlike other licensed producers of medical marijuana, Medicann has chosen to grant growers their wishes and publicly release the feminized and feminized seeds of Blue Blood. Regardless of which type one wants, the result is a plant the comes with high levels of both THC and CBD. However, acquiring the seeds is only the easy part. Growing it is a whole different story.

Blue Blood may require more care than usual as it is a finicky plant. Between the two types of seeds, feminized ones are more convenient, especially for the less experienced growers. One reason is that it guarantees an almost all female batch of plants. Another is that during trimming and pruning, the stress level is not going to turn one into a hermaphrodite.

Blue Blood takes anywhere from six to 10 weeks to finish flowering. At harvest, growers can expect a yield of 8 to 12 ounces of buds per square meter.

The plant should begin flowering at the start of September when grown outdoors. And, before the end of the month, it should be able to produce some 12 ounces of nugs per plant.

What is the Blue Blood strain yield?

How much THC does Blue Blood have?

What are the origins of the Blue Blood strain?

Blue Blood was created from a mix between OG Kush and Blueberry.

Have you ever smoked or grown your own Blue Blood? Please let me know what you think about this marijuana strain in the comments below.