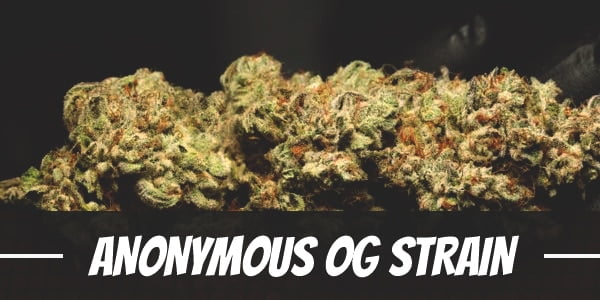 Anonymous OG is, perhaps, one of the best end-of-day treats. It is thoroughly calming with its clarifying head high and relaxing body buzz. Used at night, it is likely that its comedown becomes a sedating end that tucks users to bed.

Users have 3C Kushishima to thank for Anonymous OG. The former is among the strongest strains that supposedly comes from OG Kush. It eventually surpassed its parent after being cultivated by breeders, turning it into a sought-after Indica.

With up to 20% THC, Anonymous OG gains equal footing with its predecessor. Its powerful full-bodied high could lead to debilitating couch lock. In moderation, however, it has a variety of uses outside its recreational purpose.

For instance, one could use it as a medicinal strain. Its high levels of THC give it immense therapeutic qualities that include managing stress, pain, and psychological distress. Users may even develop extracts from its resinous, trichome-laden buds.

Anonymous OG is a slow-starting strain that usually takes about 15 minutes to begin. However, once it does, it is difficult to ignore. It induces a euphoric rush that hits the temples. It clears the mind, eliminates worries, and instills a calm disposition.

Often, too, it enhances the mood. Users may consume the strain alone as a way to relieve the stress accumulated throughout the day. Sharing it with like-minded friends during a sleep over, however, is the best choice. It spreads all-around cheer even after the initial head high.

A tingling sensation eventually trickles down from the temples. Mild at first, it gradually develops into an intense heaviness that plants itself in the limbs. It relaxes the muscles from tightness so users can settle into a comfortable spot.

The likelihood of Anonymous OG’s sedating comedown turning into reality is dependent on the dosage. It weighs the body down, lulling users to sleep without even knowing it. This makes it better for evening use

Tip: make sure to download my  free Grow Bible for more information

Anonymous OG has a pungent smell that could only be from its sour diesel overtones. Eventually, it develops into a citric lemon whose tanginess is blunted by its sweet undertones. Combusting it reveals its earthier aroma.

Enthralling the senses is a sour blend of diesel and lemon. It coats the palate citrus counteracted by a sweet earth. On the exhale, it leaves a tangy aftertaste.

One can expect to experience the usual dry eyes and cottonmouth while smoking Anonymous OG. After all, it contains the same moisture-inhibiting cannabinoids as other cannabis strains. It is often mild and, therefore, ignored by seasoned users. There is also a good chance of feeling a little anxious. As such, it is important to use the strain in moderation.

Anonymous OG’s heavy-hitting effects are undoubtedly skilled at putting the mind and body to rest. It delivers a clarifying head high that removes the overwhelming dread that keeps users up at night. Meanwhile, its relaxing body buzz quietly lulls patients suffering from insomnia or having difficulty sleeping into a deep, unencumbered slumber.

To enhance the quality and quantity of sleep, however, it employs other forms of therapeutic relief. The happy high, for instance, does not only remove worries, it also reduces stress and manages psychological distress. It manages symptoms of depression, anxiety, and PTSD.

The subtle stimulation also wakes the appetite, making it an effective ally against eating disorders like anorexia. With prolonged use under the guidance of a health professional, it is possible to gain back the lost weight. Moreover, the strain contains painkilling properties that relieve stomachaches and hunger pangs along with a variety of other aches and pains.

A natural anti-inflammatory, it reduces redness, swelling, and sensitivity in affected areas. But it also works well with reducing headaches and minor spasms. As such, apart from inflammations, it is great for arthritis and joint pains.

Anonymous OG is a stout plant that \barely goes beyond 6 feet. It has a sturdy stalk, thick branches, and excellent immunity against common pests and diseases. Highly manageable, it grows best indoors where growers can easily adjust certain factors like temperature, lighting, and humidity. Of course, this is after developing its root system.

It is best paired with the Sea of Green setup which prioritizes a single cola by gently coaxing it toward the light. Taking advantage of short stature, growers may cultivate at least four plants in a single square meter to maximize small spaces. Trimming is necessary though as it often becomes too dense to manage. Apart from thinning out, growers should ensure there is adequate air circulation by installing a sufficient ventilation system.

As harvest draws near, its green hue deepens. Its texture is rougher while becoming more compact. It is coated thickly with resin which leaves a sticky film in the palm of one’s hand if examined. Meanwhile, the gleam that it gives off are from its sparkling trichomes.

Exposing the plant to lower temperatures turns Anonymous OG’s colors deeper. In fact, it may even border to a purple or dark blue. This further adds bag appeal.

Growers can expect at least 10 to 12 ounces of buds per square meter within a short amount of time. After all, Anonymous OG only requires 7 to 9 weeks of flowering.

Anonymous OG flowers from the last week of September to the middle of October. Each plant produces up to 12 ounces of buds at harvest.

Have you ever smoked or grown your own Anonymous OG? Please let me know what you think about this marijuana strain in the comments below.