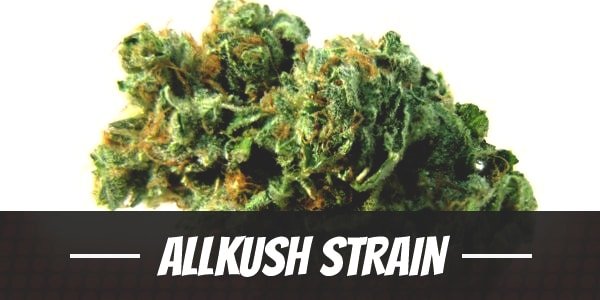 Allkush is a peculiar strain. Although it is predominantly Indica, its effects are mostly cerebral. Supposedly, it hails from the ‘Hippie Trail’ between Pakistan and Afghanistan. Although no one can pinpoint what its parents are, it remains a sought-after strain among recreational enthusiasts and medicinal users due to its blend of Sativa-like head and body high.

The onset, for instance, is a light rush of euphoria that improves the mood as it gradually sets. Meanwhile, its body high is a buzz of energy that invigorates users. The newfound motivation likely leads to a productive streak, opening the mind to a free flow of thoughts and fresh perspectives. Its ability to inspire makes it an excellent companion for waking and baking.

Of course, its functional psychoactive effects could also be taken advantage of by patients looking for a quiet reprieve that does not weigh the body down. Its relatively high THC levels which range from 15% to 18% provide pain relief and stress management. It also temporarily uplifts the mood so one can live the day to the fullest.

As an all-around strain, it is also popular among growers for its ease of growth, high yields, and short flowering time.

Having moderate to high levels of THC, Allkush is an excellent strain for users of all levels. Beginners can enjoy it as an introduction to more potent buds. Meanwhile, seasoned enthusiasts can take it up a notch and enjoy its powerful psychedelic effects.

A change in disposition is immediately visible within minutes after the first two or three tokes. Users not only seem happier, but also brighter as negative thoughts dissipate into thin air. Filling the newly created space in the mind are cheerful memories that translate physically as smiles across the face.

There is a sharper sense of focus that allows casual enthusiasts to work on projects and tasks until its completion. Feeling collaborative and inspired, it is not uncommon to see one become talkative with colleagues. Be careful though as it tends to turn one a little too chatty.

Complementing the initial head high is a buzzing energy that fuels users for the day. As such, it makes for an excellent wake and bake companion. Using it in the evening is also possible. Although, one should be careful about overconsumption as staying up the whole night could be a likely result.

Allkush has a Kush aroma that tickles the nose with its herbal spiciness. Enhancing it the subtle sweetness of honey that intensify after breaking apart the buds. Combusting it, on the other hand, reveals its earthy undertone.

The spicy Kush flavors may lead to some coughing, especially after the first toke. However, the rich blend of wet soil and sweet herbs immediately counteract the spiciness. On the exhale, it leaves a honeyed aftertaste.

Red, irritated eyes, as well as a cottonmouth, are normal reactions to toking Allkush. It is not a cause for work though. Apart from being common, it is barely noticeable. Seasoned users have no problem ignoring the dry spell, but beginners may want to stay hydrated to avoid the discomfort.

CBD is not the only compound that carries medicinal qualities. Other cannabinoids like THC also have underlying benefits outside of its psychoactive high. Its terpenes also contribute its fair share of therapeutic effects. Together, it delivers a restorative head and body buzz that patients turn to for comfort.

The initial onset, for instance, eliminates stress by soothing the overwhelming dread while simultaneously enhancing the mood. It temporarily pushes back worries as it uplifts the spirit. In a similar manner, it could also be used to manage symptoms of depression, anxiety, and PTSD which include psychological distress, emptiness, and despair.

Tora Bora is a hard-hitting Indica strain. Even when using only a small amount, it comes with enough potency. Read our full review!!

Its relaxing buzz, on the other hand, appeases aches and pains beginning from the temples. It is particularly effective when it comes to soothing or reducing intraocular pressure which sometimes causes migraines or a headache. Users will also experience a similar relief against conditions like arthritis, inflammation, cramps, as well as mild spasms.

Although its effects are Sativa-like, Allkush exhibits more Indica plant traits. It is short, sturdy, and bushy. Not only that, it is a hardy strain that has excellent immunity against common pests and diseases thus growers can cultivate it just about anywhere – indoors, outdoors, and in greenhouses. The short flowerer also leaves users with a hefty yield.

It works best with the Sea of Green setup. It shortens the vegetative period without negatively affecting yields by using non-invasive methods to gently coax the main cola toward the light. At the same time, it also maximizes small spaces.

TIP: Looking to buy seeds like Allkush? Check out my seed shop

Growers can expect at least 16 ounces of buds per square meter from Allkush. The wait is not long either, flowers are usually ready for harvest within 8 to 10 weeks.

Allkush blossoms around the second to the last week of October. It produces at least 14 ounces of buds per plant upon harvest.

Have you ever smoked or grown your own Allkush? Please let me know what you think about this marijuana strain in the comments below.