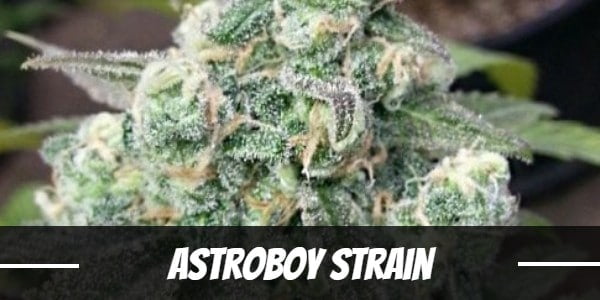 Astroboy sets itself apart from other recreational strains with its uniqueness. In only a few puffs, it launches users to soaring new heights worthy of the celestial bodies. Not only that, its zesty terpene profile wakes the senses with its energizing overtones of tropical fruit.

The Sativa-leaning hybrid has an interesting backstory to boot. TGA Subcool Seeds created the herb by chance after one of their experiments nicknamed “Taco,” a cross between Cinderella 99 and Ortega, pollinated a few of their female Apollo-13. The latter is rumored to be absolutely rare with only 500 seeds produced.

The result was an equally astounding yet unrivaled bud with stunning looks and a heavy yield. In fact, according to the breeder, many enthusiasts have swapped some of their favorite strains in favor of the highly coveted Astroboy.

Due to its high levels of THC, the Sativa dominant Astroboy has an unsurprisingly rapid onset. Almost immediately after the first hit, it reinvigorates the body with a jolt of energy. However, its initial effects center mostly in the mind where an uplifting buzz totally clears the mind.

Looking to buy seeds like Astroboy? Check out our marijuana seed bank.

The behavioral change is straightaway obvious. Not only are users smiling for no reason, many are beaming with happiness that could only come from within. Days even seem brighter for some.

Because of its great wake-and-bake qualities, casual users can enjoy Astroboy during the day. Together with the upbeat disposition, the mental clarity transforms the dreary day of work ahead into fun-filled hours of creativity instead. With a keen interest in each and every project, staying motivated and focused is not at all a challenge.

Though equally powerful, the Indica effects are not at all sedating. Rather, it complements the rush of energy from the initial onset by loosening tightness in the muscles. Fluidity and vigor amp the body’s ability to move freely so users can move around with ease.

Astroboy’s fragrance is both sweet and sour. And, with its subtle undertones of wet soil, it almost seems like a ripe citrus fruit freshly harvested. Broken apart, the tropical overtone is complemented by a mix of hazelnuts.

On the palate, Astroboy is an exciting tropical dream. It blends together hints of blueberries, grapes, and grapefruits then complement its sweetness with a creamy butter. On the exhale, the thick smoke is not at all harsh. Instead, it leaves a refreshing aftertaste of pine.

Marijuana use always comes with a cost. Often, it comes in the form of dryness in both the eyes and the mouth. Both are often a cheap price to pay because, while they are unavoidable, they are easily addressed by rehydrating with a few glasses of water. Although, to some degree, some may temporarily experience dizziness.

However, Astroboy’s highly potent Sativa buzz can be quite expensive especially when used outside of one’s limit. It can overstimulate the senses and trigger anxiety. Though rare, the keen awareness can also cause paranoia. For this reason, the bud must always be paced and used with caution.

TGA Subcool Seeds is an important player in the medical marijuana industry. Since formally recognized as a seedbank in 2005, it has gone on to produce 37 original strains designed to cater to patients suffering from any of the following: nerve pain, tremors, nausea, pain, anxiety and even social disorders.

Looking to buy seeds like Astroboy? Check out our marijuana seed bank.

As a hybrid with powerful cerebral effects, Astroboy caters to users with the latter conditions. Its mood stabilizing effects ease the symptoms of mental illnesses like depression and PTSD by silencing self-depreciating thoughts and uplifting the spirit. Meanwhile, its anxiolytic effects ease away the overwhelming anxiety that often comes with being constantly bombarded by stress.

Aside from instilling positive behavioral changes, the same stimulating THC compounds also ease away pain caused by headaches and the sharp sting of muscle spasms. At the same time, it reinvigorates the body and gets rid of fatigue.

As alluded to earlier, Astroboy is an unplanned concoction that was the result of one of the breeders accidentally pollinating a few female Apollo-13s. As such, it should come as no surprise that only a handful of it was distributed to online and local dispensaries. Moreover, due to popular demand, the feminized seeds immediately sold out. However, growers may still cultivate the strain by getting ahold of clippings from an expert enthusiast.

With that said, Astroboy seeds were often subjected to pre-germination methods such as soaking to increase the chances of it producing a female plant. Moreover, as it hit the flowering stage, growers applied Low-Stress Training techniques to ensure it did not turn into a hermaphrodite.

Apart from the unpredictability of the two factors above, Astroboy is quite an easy grow. It inherited a sturdy Indica structure with high resistance against mold and other problems caused by humidity. And, while it has a propensity for warm, semi-humid climates, it can weather through the short days of the northern hemisphere. Its short flowering period allows it to bloom just before summer ends.

Its yields, however, are largely influenced by its Sativa genes. Its buds are large and tapered on each end but completely dense in the middle. Their colors are equally stunning. Their mint hues are greatly complemented by sparse amber hairs and a thick blanket of milky trichomes.

Astroboy has a quick-flowering period of 7 to 9 weeks, relatively shorter than most Sativa-leaning varieties. Once ready for harvest, it produces between 12 to 16 ounces of buds per square meter.

In the northern hemisphere, Astroboy flowers between the last week of September to the first week of October. Once mature, it produces more than 16 ounces of buds per square meter.

What is the Astroboy strain yield?

How much THC does Astroboy have?

What are the origins of the Purple Astroboy?

Astroboy was created from a mix between Apollo 13 and Taco.

Have you ever smoked or grown your own Astroboy? Please let me know what you think about this marijuana strain in the comments below.