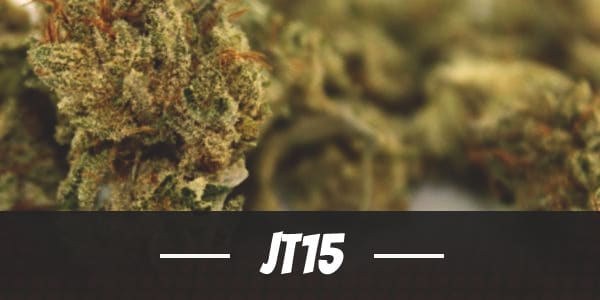 In the cannabis industry, it is rare to find strains that boast pure genetics. Most of the time, options are mostly limited to hybrids that either lean toward one end of the spectrum or the other. The choice becomes even more constrained in the medical marijuana community, where patients only have a few strains to choose from. And it is this lack that Tilray’s JT15 perfectly addresses.

JT15 is a strain with 100% Indica structure. It boasts potent THC levels ranging from 13% to 19% that, used outside of one’s limits, can be quite debilitating. But, in moderation, the bud induces a pleasant high that pairs best with a lazy day or a night of relaxation.

Sadly, most enthusiasts will never be able to recreate the Indica. Its breeders, Tilray, has chosen to bury its genetics with breeder secrecy. Still, many believe it is descended from Kush genetics. Meanwhile, some speculate the strain is a cross between the CBD enriched Harlequin and Querkle since some forms of JT15 have been confirmed to have at least 10% CBD by Canadian public resources of medical marijuana.

One thing though. Despite its potency, JT15 is a straight up creeper. As such, users must pace and moderate their consumption of the bud to avoid feeling overwhelmed once the full-bodied effects creep in.

JT15 has a buildable high that makes it a great choice for beginners and seasoned users. With that said, the Indica’s initial onset is marked largely by an uplifting buzz. Subtle at first, it is not until after a few tokes that the cerebral high intensifies. But, once it does, the behavioral change is immediately noticeable. Users beam with a brightness that can only come from a sense of innate happiness.

Although, it might be best to prepare some snacks ahead of time since the mental stimulation can be quite hunger inducing.

After an hour or so, the Indica effects begin to take hold. The buzzing sensation starts from the back of the head until it develops into a full-bodied relaxation. Most likely, the heaviness will anchor some to their couches until they feel a little sedated. Eventually, users doze off and join Mr. Sandman in his trip to Dreamland.

JT15 has a predominantly earthy profile with overtones of wood. Broken apart, its dank aroma produces a musky spicy scent.

JT15 has a refreshing smoke that, when drawn in, bursts in the palate with a pine goodness. Complementing the delicious wood are subtle notes of herbs and spices that become totally apparent on the exhale.

Having a beverage nearby while smoking marijuana is always a wise decision. This is because certain cannabinoids in the herb tend to interfere with the production of moisture in the tear ducts and the salivary glands. As such, enthusiasts will most likely end up with red eyes and a cottonmouth. Although, one must note that the drink must neither be laced with caffeine or alcohol as both tend to exacerbate any negative effects.

JT15 was purposively created for the medical community. In fact, according to the Canadian Medical Marijuana Public Resource (MMJPR), Tilray has produced various forms of the strain including oils and dried buds that have been tested to contain almost 1:1 THC to CBD version of the Indica. As such, it comes as no surprise that the pure Indica provides a reprieve against a variety of mental and physical conditions.

In high levels, the same psychoactive compound turns into a painkiller. It induces a soothing high that relieves users of various aches including spasms in the gastrointestinal tract. For this reason, the bud also works great as an appetite stimulant. To casual users, this means an increase in food intake. But, for users with eating disorders or cancer patients undergoing chemotherapy, it allows the stomach to relax and process meals.

Sleep is a crucial step in the regenerative processes. A natural sleep aid, JT15 emphasizes its healing power with its powerful sedating effects that can even whisk people with insomnia to sleep.

At the moment, Tilray has chosen to keep JT15 seeds private. This keeps other unlicensed breeders from creating fake merchandise and potentially scam users.

With that said, it is easy to determine JT15’s growth pattern based on its structure and its classification. For instance, because of its pure Indica genetics, it is likely a short hardy plant that grows quite bushy. As such, it may need constant pruning so nutrients can work their way to healthier budding sites. Aspiring growers may want to watch out for sugar leaves though. Leaving the trichome coated parts only serves to up the plant’s potency.

As a medical strain, it is highly likely JT15 is grown in controlled environments like indoor growing spaces or greenhouses. With the ability to adjust factors such as lighting, temperature, and humidity, Tilray assures its users of premium quality medical cannabis with stable chemical compounds regardless of when the batch was produced.

This is not to say that a medical strain like JT15 does not perform well outdoors. Au contraire, it flowers exceptionally well in temperate, cool, and even warm weather. However, it is exposed to unpredictable factors such as climate and pestilence that, without a doubt, can hamper the plant’s growth. Moreover, it can possibly destabilize its THC levels. For this reason, many still prefer cultivating their medical marijuana indoors.

JT15 has an indoor flowering period of 7 to 9 weeks. Each square meter produces between 10 to 12 ounces of buds per square meter but with the Sea of Green method, it can yield even more.

JT15 usually flowers from the last week of September to the second or third week of October. Once mature, growers harvest more than 12 ounces of buds per plant.

Have you ever smoked or grown your own JT15? Please let me know what you think about this marijuana strain in the comments below.