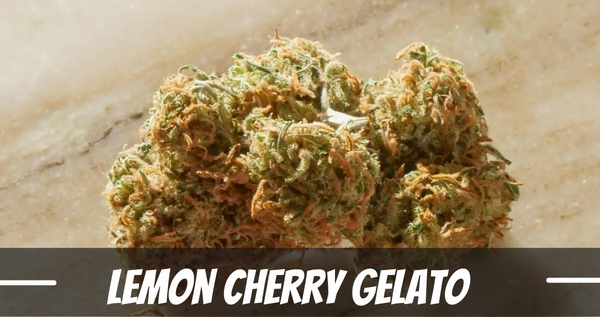 Ever since Backpackboyz and 5 Points LA joined forces, they’ve produced nothing but hits like Lemon Cherry Gelato strain.

Their names are synonymous with high-class cultivation and top-quality weed.

The Lemon Cherry Gelato strain seeds flower like a rising sun in the amazon, with burnt amber pistils piercing the thicket of striking green buds.

A sugary coating of caramel-colored trichomes covers the nugs, and it almost looks as though they’re slowly going up in flames.

The plant has little to no leaves, adding to its rare and unique appearance.

Lemon Cherry Gelato’s primary terpenes are Valencene, Linalool, Carene, and Sabinene, which work together to give the strain its enticing fragrance, flavor, and effects.

These factors play into the Lemon Cherry Gelato strain price, which may differ between sellers and areas.

If you’re not sure it’s a worthwhile spend, this Lemon Cherry Gelato strain review will help you decide.

Outdoor yields are what you’d expect from a strain of this quality, delivering 10-15 oz/plant (upwards of 280g/plant).

Backpackboyz and Five Points LA have a long history of growing cherry variants with high THC, so you know this strain’s packing.

But exactly how much THC does Lemon Cherry Gelato have? Anywhere from 19% and 30%, making it one potent treat.

Edibles, which hit harder and last longer, are an excellent way for more daring users to maximize the Lemon Cherry Gelato strain effects.

Vaping boosts the flavors without amplifying the effects and is better for less experienced users. Tinctures delay the onset of effects, so don’t take too much.

If you know a little something about terpenes, you’ll have an idea of what to expect with the Lemon Cherry Gelato strain effects.

But, if you’re still learning, this portion of the Lemon Cherry Gelato strain review will shed some light.

Picture this: It’s Friday evening. You’ve had a long, hard day, and your stress levels are high.

You’ve got plans to meet up with friends, but you’re miserable, your body’s aching, and the idea of leaving your house makes you anxious.

So you roll a Lemon Cherry Gelato strain joint…

It hits with a wave of tingles, sending you into deep, full-bodied relaxation.

An intense cerebral high follows, flooding your mind with happy and positive thoughts as you drift further into elated, euphoric bliss.

It’s just the mood booster you need to get your social game in motion. Plus, it’s super delicious and perfect for sharing.

You can thank the terpenes for this. Carene is said to promote healthy bones, while Sabinene aids digestion.

Linalool is an excellent analgesic, meaning it relieves pain, and its effect on the nervous system gives it incredible mood-boosting qualities (just like Valencene).

They all contain anti-inflammatory properties that soothe muscle spasms and physical discomforts. What more could you need?

This one’s a typical fruity bud. But what did you expect from a strain called Lemon Cherry Gelato?

A gassy undertone hints at the strain’s potency, while a soft, creamy sweetness pays homage to its Cookies (GSC) roots.

Traditional fruity notes of citrus and lime blend effortlessly with the more exotic tastes of mixed berries, cherry, and dragonfruit.

Touches of natural earth, like wood and pine, contrast against diesel’s subtle yet indistinguishable undertones.

It’s got those familiar elements you’ve tasted before but offers them in a way you’ve never experienced.

If you’re taking in all this Lemon Cherry Gelato strain info, we don’t have to tell you it’s not the best choice for newbies.

Lemon Cherry Gelato is a marijuana strain that can overwhelm you if you’re not careful, so consume it in small, steady doses, even if you’re a seasoned user.

Lemon Cherry Gelato strain is mentally energizing and enhances focus in smaller quantities, but it’ll put you to sleep in larger amounts.

Lemon Cherry Gelato weed will definitely give you red, dry eyes and cottonmouth, thanks to its high THC content and the terpene Carene. It’ll also leave you hungry.

These reactions are more likely if you’ve got a low THC tolerance or consume too much. Remember, quality, not quantity.

Lemon Cherry Gelato strain can be grown indoors and outdoors, preferring a warm and humid climate.

According to Lemon Cherry Gelato strain grow info, it’s easy to grow, though your know-how may influence overall yields.

Though Lemon Cherry Gelato doesn’t have much in the way of leaves, its nugs are pretty dense, and you should take extra care.

A humid environment plus tightly-packed buds can equal disaster if you don’t apply the proper techniques. The plant will reward your extra care with pretty decent yields.

Check out our popular Grow Bible, which has helped beginners and seasoned growers with their marijuana cultivating journey.

Lemon Cherry Gelato strain grow info states a flowering time of 57-62 days, and harvests will be ready in roughly 64 days.

It’s a photoperiod plant that can be grown from seeds and clones.

The breeder behind Lemon Cherry Gelato cannabis strain is a mystery, and even its genetics are a little ambiguous.

Cannabiseurs believe the unknown strain must be a Lemon phenotype, with the most prominent theory naming Lemon Haze.

Lab reports support the possibility of a Lemon phenotype, but it remains unconfirmed.

It’s a three-way cross of Sunset Sherbet, Girl Scout Cookies, and a strain that remains unidentified (though this hasn’t stopped people from speculating).

This lovely strain offers powerful states of euphoria and heightened awareness. It’s perfect for winding down at the end of the day and putting your mind at ease.

Girl Scout Cookies is an Indica dominant hybrid of 40% Sativa and 60% Indica.

The high is intense and instantaneous when smoking this strain, relaxing you into a deep sedative state, making it ideal for an end-of-the-day evening smoke.

The Lemon Cherry Gelato strain genetics uncertainty makes it more intriguing as users and experts try to unravel the secrets it holds.

Lemon Cherry Gelato cannabis strain is pretty easy to grow, doing well indoors and outdoors, and responding to most grow methods and techniques.

It could be. It’s not one of the most common effects, but many users experience arousal. Pair this with its aromatic fragrance and mouth-watering flavors, and you’ve got yourself a winner.
If you’d rather have a strain that can guarantee you a happy ending, so to speak, try one of these instead.