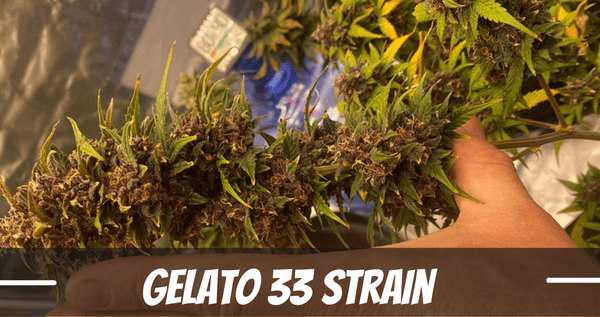 Bred by Cookie Fam Genetics, Gelato 33 strain is a hybrid blend of 55% indica to 45% sativa that has quickly climbed the ranks.

Gelato strain 33 is the flavorful offspring of the well-known Sunset Sherbert and Thin Mint GSC.

Gelato 33 hybrid strain, with all its flavor and appeal, also comes with a punch.

Stacking a punch, Gelato 33 strain THC content can reach up to 20%-22% THC, making this strain a fan favorite for veterans and newbies alike.

Is Gelato 33 strain indica or sativa?

An observation of Gelato 33 strains’ sativa or indica characteristics indicates its hybrid nature.

Facing off with a 55% indica to 45% sativa ratio, Gelato #33 weed strain presents the best of both worlds, providing strong indica effects along with sativa growing tendencies.

This strain’s growing popularity certainly isn’t unfounded since gelato 33 strain genetics come from a line of heavy-weight parent strains that have rightly earned their stripes within the cannabis community, the first being Sunset sherbet.

This indica dominant strain packs a 21%THC punch and is the result of crossing legendary GSC with the Pink Panties strain.

Gelato #33 strain’s other parent strain is Thin Mints GSC. This cookie- type strain is a perfectly balanced hybrid with a 23% THC average.

With recognizable names such as these, you just know that the Gelato 33 marijuana strain comes from prime stock.

According to Gelato 33 strain info, this strain does pose some difficulty to growers, especially due to its sensitivity to temperatures, making it a prime choice for indoor growers.

However, with proper care, it can thrive outdoors.

Gelato 33 strain seeds are available online, or you could grow from cuttings; however, you need a fair grasp of cultivation knowledge to get the best out of your crop.

Gelato 33 weed strain grows best in a Californian-style climate; however, if you reside in a region that doesn’t have prime weather, you may want to consider an indoor grow setup with a tent to best regulate your temperatures and airflow.

The Gelato #33 strain has relatively good pest and disease resistance, although you will have to keep a close eye on them in case.

As mentioned before, Gelato number 33 strain can grow incredibly well outside, provided you give adequate care, and attention to your plants and have the optimum climate.

Despite Gelato 33 strains’ sensitive growing tendencies, it is a rewarding yield producer with a relatively short flowering time.

For indoor cultivators, the Gelato 33 strain flowering time should start around the 8-9 week mark, whereas outdoor growers can expect it to peak around mid-October.

With autoflowering, growers can utilize an 18hour on – 6hour off light cycle for optimum results.

Despite being an indica-dominant hybrid, its effects are pleasantly sativa-leaning, with an uplifting mental high that gives you an energy jolt and an enveloping feeling of calm and serenity.

The brain buzz proceeds a body high that, surprisingly, isn’t as couch-lock inducing as one would expect.

Many have credited this strain for alleviating the discomforts of aches and pains, inflammation, and headaches.

There are mild side effects, as with most weed strains, so you can expect dry eyes and thirst.

Some users have reported elevated levels of paranoia and anxiety, although that is commonly associated with consumption in large amounts and should be expected, considering the gelato 33 strain thc level .

Before you even light up, you’ll find much more to this pot than the gelato 33 weed strain effects.  It is layered with flavor and diverse aromas to entice any stoner out of the woodwork.

Its flavor is a blend of blueberry with sweet sherbet and strong citrus, elements of wood, and a subtle earthiness.

Its fragrance is similar, with a sweet blueberry and sherbet pungency.

The woody, citrus notes can be credited to some of its dominant terpenes, Limonene, Pinene, and Myrcene.

What is the difference between Gelato and Gelato 33?

Gelato is an original hybrid strain formulated by Cookies fam that has spawn many various phenotypes, one of which is Gelato 33. However, many people still refer to Gelato 33 as simply Gelato.

How much is an ounce of Gelato 33?

The price of this weed strain, Gelato 33, will greatly vary from one seller to the next. This is due to general availability and the overall growing difficulty of Gelato #33. Expect to pay, on average, $99  and upwards per ounce.

Most certainly. Gelato #33 strain is created by some of the best growers around, with flavor, aroma, and potency in mind. The caliber of this strain would definitely be considered top-shelf.

What is Gelato 33 strains relation to Larry Bird?

This strain has been fondly named Larry Bird strain gelato 33 as a homage to Larry Bird’s jersey number.