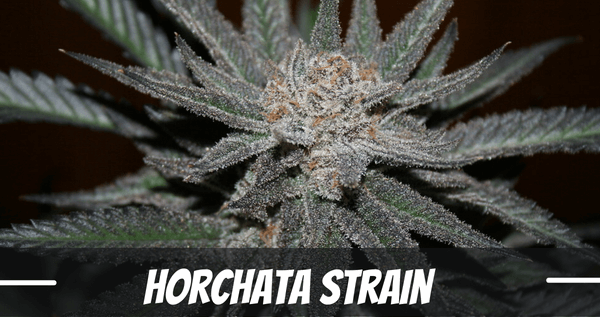 Horchata strain, named after the popular dessert-like beverage, is a uniquely flavored blend of Jet Fuel Gelato and Mochi Gelato.

Horchata comes with a generous dose of THC, starting around 19% and reaching 25% (if grown under ideal circumstances).

Unlike many potent strains, the Horchata strain effects come on pleasantly smooth instead of overwhelmingly intense, making it a great strain for winding down evenings with good friends and stimulating conversation.

Is Horchata strain indica or sativa?

Horchata is a hybrid, meaning it’s composed of both indica and sativa genes, so the real question is, is Horchata strain sativa or indica leaning?

It’s generally indica leaning at a cool 65%, though some variants offer a balanced 50% indica to 50% sativa split.

It all depends on who you’re getting it from.

Though Compound Genetics is the original breeder of Horchata strain, Backpack Boyz, Meraki Gardens, Dubz Gardens, and Wyeast Farms are all cultivators offering their version of the Horchata strain weed.

Between the different cultivators of this strain, you’re sure to find the version that best suits your tastes and provides the high that you’re after.

With abundant flavor, fragrance, and potency within its lineage, Horchata strain genetics are a testament to its family tree.

It serves up a strong, uplifting high without dreaded couchlock effects.

Mochi Gelato is also a hybrid strain, hailed for its pain-relieving properties and creativity-spurring effects.

Both parent strains have earned their stripes in their own right, and the Horchata weed strain, which inherited some of their best qualities, is well on its way to doing the same.

Unfortunately, Horchata strain is relatively finicky and demanding throughout its growth cycle, and you should take note if you want to cultivate it.

The most valuable Horchata strain info in your repertoire will be establishing and maintaining the correct ventilation, which could make or break your harvest.

You want enough airflow to prevent excessive moisture, which could result in pests, mildew, and bud rot, but not so much that you dry your plants out or subject them to unnecessary stress.

Maintaining that balance between humid and dry requires skilled care and attention, making this one better suited for experienced growers.

If you’re a newbie and want to take on the challenge, consider growing indoors, where the conditions are easier to control.

You should also download our Marijuana Grow Bible for an easy step-by-step guide.

Horchata strain thrives in Mediterranean climates where summers are warm and dry with some humidity.

It can be grown indoors and outdoors, but controlled environments are best, as any minor changes in the lighting schedule could disrupt the growing process.

You’ll need to monitor the plants closely, as they have minimal resistance to diseases and pests.

Outdoors, you can expect to harvest around the end of September/ start of October, depending on where you live.

Despite its demanding nature, Horchata offers a rewarding growing experience with a fruitful harvest.

It’s a fast grower, so expect a flowering time of 55-62 days for the photoperiod type.

Some Horchata strain info suggests a flowering time of 49 days, though this requires an exceptionally skilled hand.

A common theme among any Horchata strain review is that, for an indica dominant strain, it has surprisingly un-indica like effects – unless consumed in larger quantities.

The strain delivers a high with an elevated mindset and refined focus, spurring creativity and renewed motivation.

It’s the perfect strain for inspired evenings of artistic activities or stimulating engagements with close friends.

Despite a low CBD content (around 0.6-0.8%), Horchata provides incredible relief from discomforts, depression, and stress.

The strain has also shown dramatic success in helping relieve symptoms associated with severe anxiety and PTSD by elevating mental state and emotions.

As far as undesirable effects go, Horchata is relatively gentle, inflicting little more than mild thirst, hunger, and dry eyes, a common occurrence for most cannabis strains. Excess use may result in mild sedation.

Thanks to its rich terpene profile, Horchata’s flavor is just as exotic as its name.

Myrcene’s diverse palette of sweet fruit, earth, spice, and musk acts as the perfect backdrop for the rest of the terpenes to build upon, and the result is divine.

Upon crushing your nugs, you’re welcomed by a refreshing scent of mint and pine, with strong earthy notes, sweet vanilla, skunk, and gas.

These flavors transfer from the nose to the tongue flawlessly, further complimented by elements of orange citrus, cinnamon, spices, cloves, and berries.

You’ll experience a gentle smoke that maintains a classic skunkiness without the cough-inducing scratchiness.

Why is this strain called Horchata?

The Horchata weed strain has been likened to a drink of the same name since both provide a sweet, creamy flavor with hints of spice.

The drink (pronounced orr-cha-tah) originated in North Africa and gained popularity in Spain before becoming synonymous with Mexican culture.

It’s typically plant-based, made using rice, cinnamon, and nuts, but you can find some containing milk.

Like the Horchata cannabis strain, different versions of the drink are available.

What is the preferable growing climate for the Horchata strain?

It grows best in a controlled environment with well-monitored humidity and ventilation, maintaining a warm and dry climate.