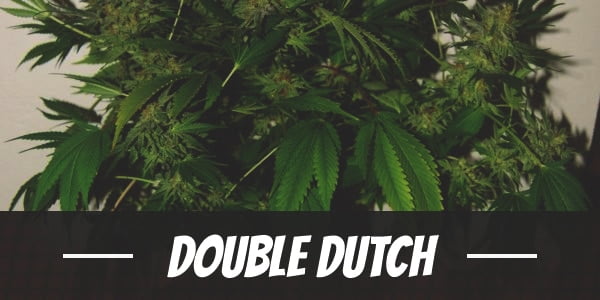 Magus Genetics was one of the most prolific marijuana cultivators of the 1990s. It produced the highly coveted Warlock strain and its offspring, Double Dutch. The former gained traction for its one-of-a-kind high while the latter’s ticket to fame was its heavy yields and easy grow. Not only that, it quickly became a hit among cannabis enthusiasts around the globe for its delicious smoke.

In creating Double Dutch, Magus Genetics founder Gerrit paired a male Warlock with a special Chronic, a female from the original version created by Serious Seeds pre-2000. The lady enhanced the magical wizard’s growth profile to create the quick-flowering predominantly Indica variety with twice the resin and trichome production of either parent.

Truly enough, the apple does not fall far from the tree. Like its award-winning parents, Double Dutch has taken home titles at numerous competitions including the 2007 ICMag Growers Cup where it took the top spot.

Sadly, the original Magus has decided to step away from the limelight due to unknown personal reasons and the Netherland’s looming ban and negative stance against marijuana. It was at this point that Gerrit approached his long-time friend, and owner of Serious Seeds, Simon to help keep his legacy alive by transferring his hold on strains and seeds produced by Magus Genetics.

Though Indica-leaning, Double Dutch retains much of its Sativa traits including a fast-acting cerebral onset. Almost immediately after the first puff, an uplifting buzz builds from the back of the temples and swarms the mind until it is clear. A great recreational hybrid, the stimulating head high and upbeat disposition turn people chatty as each fun-filled memory of the past is brought to the light.

To casual users, the mental clarity files results in a heightened sense of focus. It organizes the mumbo jumbo of thoughts that often blocks away creativity. With their potentials unlocked and a renewed sense of motivation, many waste no time staying productive throughout the day.

Users may have to prepare some snacks ahead of time though. This not only keeps users from breaking their concentration, it will also help replenish any energy used up by the mental stimulation.

Double Dutch has a rich floral aroma that perfectly blends with its overtones of sweet fruit. Its undertones of wet soil, however, make the bud seem like it has been freshly uprooted. Regardless, when the bud is ground, broken apart, or combusted, it releases a pungent tar-like scent.

On the palate, Double Dutch leaves an interesting taste that is mostly floral but with the earthy undertones of herbs. On the exhale, a citric sweetness washes over the mouth.

Dehydration is a typical reaction to smoking marijuana. As such, users will most likely experience a cottonmouth and dry eyes while using Double Dutch. Though both are unavoidable, they remain mild and barely noticeable. But, for beginners, the dry spell can be quite uncomfortable. In such cases, it is best to rehydrate by drinking a few glasses of water during or after the session.

Though rare, users may also temporarily experience dizziness and headaches. This is usually the result of not pacing the bud though it can also come using too much of Double Dutch. As such, one should always consume the bud with caution.

Presumably, Double Dutch was created with a recreational purpose in mind. Still, the Indica-leaning hybrid’s chemical compounds retain enough therapeutic benefits to be of value to the medical marijuana community.

In inducing a happy high, for example, Double Dutch effectively curbs away stress. Though most notable for its ability to ease chronic levels of the latter, its mood enhancing effects allow users to temporarily manage depression as well as other mental illnesses like anxiety and PTSD.

Apart from the mental, stress can also manifest through physical fatigue especially at chronic levels. It is characterized by soreness, body aches, and tightness in the muscle which eventually develop into cramps. Through the painkilling properties of its THC, Double Dutch frees tension and releases the body. Meanwhile, its subtle energizing effects reinvigorate users. At the same time, it also reduces swelling and redness.

Double Dutch has the structure of an Indica. It is short but impressively sturdy. Not only that, it is absolutely bushy with leaves that spread quite wide during the vegetative phase. For this reason, it requires constant pruning. Apart from aesthetic reasons, trimming keeps molds from forming by allowing the bud to breathe. Moreover, cutting away the dying parts of the plant allows nutrients to focus their energy on keeping budding sites healthy.

Interestingly, Double Dutch buds have Sativa tendencies. On each side, it elongates the typical popcorn-shaped nugs of the Indica-leaning variety. They are also quite huge, heavy, and completely covered in sticky resin. Its colors are stunning too. Its striking green looks completely light due to a milky blanket of trichomes.

No doubt, Double Dutch grows well outdoors. Its yields are higher while its buds are much more flavorful especially in temperate climates. But because the plant was originally developed for indoor growing, it prefers controlled environments that use organic mediums such as bio and coco. To achieve higher yields and ‘cleaner’ nugs, aspiring growers may opt to use a hydroponic system. Bending it will also ensure an even canopy that evenly spreads light and air among the batch.

Luckily, Serious Seeds sells both the feminized and regular forms of Double Dutch’s seeds. The former is great for beginners trying out their green thumbs for the first time while the latter is for more experienced growers. Although, those planning to cultivate the feminized seeds may want to apply pre-germination techniques like soaking and Low-Stress Training to increase the chances of producing a calyx-filled female.

It takes a relatively short 8 to 9 weeks for Double Dutch to finish flowering. A vigorous yielder, it produces more than 18 ounces of buds per 9 seedlings in each square meter.

In the northern hemisphere, Double Dutch blooms between the last week of September to the second or third week of October yielding 21 to 28 ounces of buds per plant. Although, under the expert care of a seasoned grower, it has the capacity to produce even more.

Have you ever smoked or grown your own Double Dutch? Please let me know what you think about this marijuana strain in the comments below.