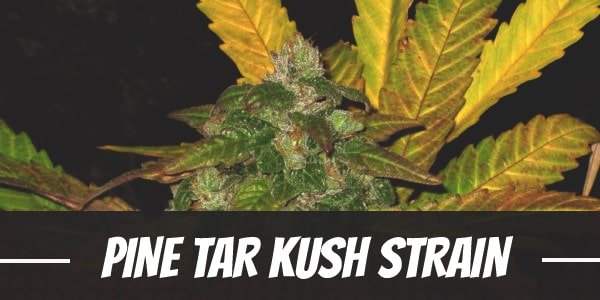 All over Pakistan are indigenous Indica varieties that have made their mark in the country’s rich history. The green herb was once used in religious settings where it was seen as a catalyst of spiritual enlightenment. Meanwhile, its medical benefits are widely valued and even well-documented throughout the region. And, though rare, some ancient communities use the Indicas recreationally as a way to experience euphoria.

Sadly, the circumstances are different today. The once culturally enmeshed plant is now seen as a nuisance especially after Pakistan gained traction in the Hippie Trail of the 1960s and 70s. Since then, the Pakistani government has taken a hard stance against the native marijuana plants growing around the region.

Some enthusiasts have successfully managed to smuggle a few of the Indica varieties though and continue to sell the plants with little to no variation in their genes. One of which is Pine Tar Kush, a strain aptly named for its wood-flavored terpenes and tar-like buds. In fact, opening its amber container is enough to fill the room with its scent while placing its bud in one’s hand leaves a sticky residue of resin.

Unlike the rest of the landraces that originate from Pakistan, Pine Tar Kush is a tad bit stronger. The plant received a subtle genetic change that resulted in higher levels of THC (18% to 22%). For this reason, it is a good recreational smoke and an effective medicine.

It takes a few tokes before Pine Tar Kush’s effects begin to manifest. But, once it does, it begins with a subtle yet unparalleled sense of euphoria that comes with a positive change in mood. The upbeat disposition is infectious as users find themselves giggling for even the littlest reasons.

But, the true crème of the crop is Pine Tar Kush’s Indica effects. It starts with a light pressure from the back of the temples that buzzes as it trickles down. In all likelihood, a soothing sensation overcomes the muscles so a heaviness may set in the limbs. Both calming and sedating at the same time.

Used outside of one’s limits, the powerful buzz can render one immobile. In moderation, however, the effects are pleasantly stress relieving.

Basking in deep relaxation, it is only a matter of time before eventually users drift off to dreamland. For this reason, it is best to avoid using Pine Tar Kush during busy days as it can severely hamper productivity.

Pine Tar Kush is a true delight for the senses. Its refreshing pine with subtle accents of sweet citrus is invigorating. But, once broken apart or combusted, its overtones of skunk with undertones of earth fill the air.

Pine Tar Kush entices the palate with notes of freshly picked citrus and subtle hints of damp earth. Complementing the sweetness is a woody pine that, on the exhale, leaves a skunky aftertaste.

It is always handy to have a glass of water nearby when using Pine Tar Kush. Cannabinoids usually interfere with the production of moisture. Most likely, users end up with a cottonmouth and dry eyes.

However, paring the bud with either alcohol or caffeine can exacerbate problems. It may even lead to a condition called greening out, wherein users experience slightly nauseating headache. In worst case scenarios, it can heighten anxiety levels and cause users to feel a little paranoid.

Thankfully, this is a rare occurrence that often only affects users who underestimate their tolerance to THC. As such, the golden rule of never overconsuming marijuana should be followed.

Like other indigenous varieties, Pine Tar Kush was once an important part of ancient Pakistani healing rituals. While its therapeutic use is well recorded, it was not until recently that the herb’s chemical compounds were proven to be truly beneficial.

For example, its potent levels of THC induce a happy high that works wonders for people constantly bombarded by stress. At the same time, it temporarily eases symptoms of depression such as overwhelming anxiety and feelings of hopelessness.

The subtle mental stimulation also restores the appetite. For this reason, Pine Tar Kush is best used an hour or two before a meal. It soothes the gastrointestinal tract so food travels smoothly. This is especially useful for users with eating disorders or for cancer patients undergoing chemotherapy.

Apart from being a mood-enhancer, THC is also a natural painkiller. It appeases body aches and pains such as cramps or sudden muscular contractions.

Pine Tar Kush’s landrace genetics make it an easy plant to grow. For one, it is extremely sturdy and can withstand being weathered through by sunlight and humidity. Still, many growers prefer cultivating their strain in controlled environments where one can easily adjust important factors such as lighting and temperature. Plus, the herb has a naturally short stature that can fit most indoor growing spaces and tents.

A bushy plant, Pine Tar Kush requires constant pruning and trimming. Otherwise, it can block off light and air in lower end branches and risk the death of budding sites. Moreover, manicuring the buds will make them appear more aesthetic. Once mature, it produces striking bright green buds packed with milky trichomes and fine orange hairs. Adding to that is an incredibly thick layer of sticky resin that almost drips.

There are various seedbanks and dispensaries that sell Pine Tar Kush. However, aspiring growers may need to verify their authenticity before buying.

It takes anywhere between 7 to 9 weeks for Pine Tar Kush to fully flower. Once ready for harvest, it yields an average of 10 to 12 ounces of buds per square meter.

Pine Tar Kush usually blooms by the last week of September. However, in harsh weather, the flowering period can extend up to the second or third week of October. Regardless, it produces at least 12 ounces of buds per plant.

What is the Pine Tar Kush strain yield?

How much THC does Pine Tar Kush have?

What are the origins of the Pine Tar Kush strain?

Have you ever smoked or grown your own Pine Tar Kush? Please let me know what you think about this marijuana strain in the comments below.