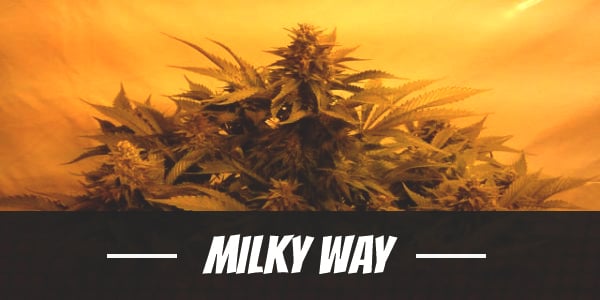 Milky Way is on its way to becoming one of the most popular strains in the industry. At up to 22% THC, the dominantly Indica bud induces an uplifting psychedelic high befitting of the celestial body. However, its true power lies in its long-lasting and full-bodied relaxation that makes one feel as though they were floating aimlessly through space.

Though its creator Kiwiseeds has chosen to keep its lineage a secret, many cannabis enthusiasts remain curious of Milky Way’s ancestry with many believing it to be an offspring of Northern Lights and Hash Plant. Although, the original breeders do claim the delicious bud is a cross between two potent predominantly Indica buds.

Though created for medical purposes, Milky Way is a versatile strain. Its euphoric effects, for instance, can be used to relieve stress but they are also great for recreation. Not only that, it has a buildable high that suits both beginners and seasoned users.

As an Indica-leaning strain, Milky Way is a natural creeper. It usually takes as long as 15 minutes for its psychedelic high to take effect. Because of this, it is important to pace consumption of the bud. Otherwise, it could lead to dire consequences such as feeling overwhelmed.

The initial onset, though gradual, begins with a subtle euphoric rush. As it spreads to the deepest recesses of the mind, it uplifts the mood so users feel happy from within.

Gradually, a tingling buzz courses makes it way to each and every limb. A heaviness sets in the muscles that though sedating is quite calming. In excess, however, it anchors users immediately to their couches. But, using the bud within its limits envelops most in a blanket of relaxation until they eventually drift off to dreamland.

Milky Way’s fragrance is best described as sweet and spicy earth. While it may sound weird to some, the scent is absolutely tantalizing. Its subtle undertones are that of tropical fruit blended with a floral tinge of herbs.

Drawn in for the first time, Milky Way floods the mouth with sugary overtones of tropical fruit. On the exhale, it leaves an herbal spiciness lingering in the palate.

Regardless of the strain, marijuana use always leads to dehydration. Its symptoms are most noticeable in the eyes. But, with cannabinoids interfering with the production of saliva, users will most likely end up with a cottonmouth too. Still, both are not a cause for concern as they usually go away with time. However, for beginners experiencing discomfort, downing a glass or two of water will help.

Greening out is also possible while consuming Milky Way, especially when used in higher doses. In such cases, users often experience a temporary case of either dizziness or headaches. Though rare, people may also feel slightly paranoid. Pacing and moderation, however, will keep the condition at bay.

As a medical grade strain, Milky Way comes with its fair amount of benefits due to its high levels of THC. For one, it delivers a mood enhancing high that relieves users of stress through and through. At the same time, it positively transforms one’s negative mindset to help manage mental illnesses like depression, anxiety, and PTSD.

Milky Way also comes with painkilling properties. Its soothing body buzz relaxes the muscles and courses through the body to get rid of cramps. Meanwhile, the bud promotes overall wellbeing by encouraging users to sleep with its sedating effects.

Kiwiseeds are known creators of medical marijuana. As such, it comes as no surprise that their products grow best indoors where they can easily maintain or enhance the strain’s chemical compounds. Not only that, controlled environments allow growers to adjust important factors such as lighting, temperature, and humidity.

Being an Indica, Milky Way grows short and rarely requires height management techniques. Although, those with truly limited areas may shorten the vegetative period to keep the plant from spurting more than 3 feet. Its bushiness may require a bit of pruning and trimming though. Both ensure nutrients make their way to healthier budding sites by cutting away dying parts of the plant. With that said, applying the Sea of Green method will help maximize yields.

Though Milky Way thrives best indoors, it has no problem withstanding the unpredictable weather outdoors so long as it remains cool and temperate. In such climates, the plant yields high but aspiring growers may want to set up some pest control systems.

To make the growing process easier, Kiwiseeds has released both the feminized and regular versions of Milky Way. The former is recommended for beginners as it is an easier grow while the latter usually caters to growers looking to enhance their skills. Regardless, both produce the stunning resin-dripping, milky trichome-coated buds that the herb is most coveted for.

It takes anywhere between 7 to 9 weeks for Milky Way to fully flower. Once mature, growers harvest at least 19 to 23 ounces of buds per square meter.

Outdoors, Milky Way flowers between the last week of September to the first week of October. It yields at least 19 ounces of buds per plant.

Have you ever smoked or grown your own Milky Way? Please let me know what you think about this marijuana strain in the comments below.