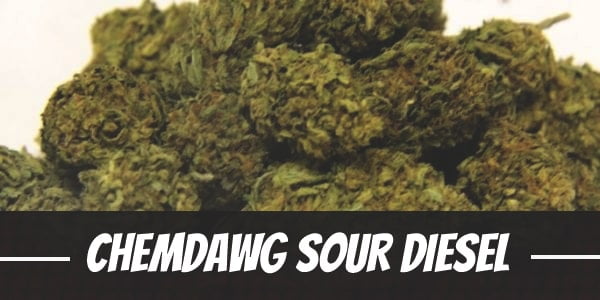 Chemdawg is a classic that captured the heart of consumers since its introduction to the cannabis industry in the 1990s. In creating Chemdawg Sour Diesel, Reservoir Seeds hybridized the world-renowned strain to further enhance its psychedelic effects. It was later paired with their own inbred Sour Diesel line for its cerebral focused high, powerful aroma, and heavy yields.

Like both its parents, Chemdawg Sour Diesel boasts high THC levels and a unique terpene profile that is immediately recognizable. Its sour chemical flavored smoke induces an intense buzz that, when used in excess, can be totally debilitating. While definitely a thrill seeker’s strain, beginners may still enjoy the potent bud with the help of a seasoned friend.

Beyond Chemdawg Sour Diesel’s recreational appeal is its therapeutic value. Its chemical profile gives it the capacity to relieve many mental and physical afflictions.

As alluded to earlier, Chemdawg Sour Diesel boasts impressive THC levels that usually range from 18% to 26%. Hence, like other predominantly Sativa strains, its effects come almost immediately after the first hit.

During the initial onset, the strain delivers an incredibly uplifting cerebral high. In enhancing the mood, the rush of euphoria also inspires a sense of happiness from within. But for most casual users, it does more than just uplift the mood. In fact, the clearheaded high is only a preclude to the creative buzz it inspires. Abound with ideas and renewed motivation, most stay focused throughout the day.

In waves, a light pressure slowly ebbs down from the temples. It is subtle yet its calming effects are noticeable. It releases tension and tightness in the muscle until users are enveloped in a full-bodied relaxation that is not at all sedating. Instead, it allows one to move freely and works in tandem with the persistent mental effects to achieve productivity.

Like Sour Diesel, Chemdawg Sour Diesel has a strong pungent aroma. Apart from its sharp sour diesel scent, it has refreshing undertones of pine and lemon. A subtle earthiness permeates the room once the buds are broken apart.

Carrying over to Chemdawg Sour Diesel’s smoke is its diesel fragrance. Drawn in, its subtle citric undertones tantalize the senses with its zesty tanginess. On the exhale, a chemical overtone accented by lemon lingers in the palate.

Users of marijuana usually experience dehydration with symptoms most pronounced in the mouth. To some degree, some end up with dry eyes too especially since cannabinoids also inhibit the production of moisture in the tear ducts. Still, neither are a cause for concern and are easily mitigated by drinking a glass of water.

In high doses, Chemdawg Sour Diesel can lead to a condition called ‘greening out’ wherein users experience dizziness and anxiety. Some people may even feel a little paranoid due to the heightened awareness. While they usually disappear as the high subsides, it is still best to be wary about one’s consumption of the bud.

Chemdawg Sour Diesel remains a go-to strain for people in the medical marijuana community. Its potent THC levels, combined with other compounds like CBD, provide a reprieve against various conditions including depression.

A potent Sativa leaning strain, Chemdawg Sour Diesel delivers a mood-enhancing high that uplifts spirits while simultaneously stabilizing turbulent emotions. In doing so, it calms the fast-paced thoughts of users ridden with anxiety. As such, some may use the bud as a temporary stress reliever.

In chronic levels, stress can manifest beyond the behavioral and result in fatigue. The physical exhaustion may even lead to people experiencing aches all over the body. Often, it requires ample amounts of rest and relaxation to reduce the pain. To this end, Chemdawg Sour Diesel works perfectly. Its soothing buzz eases users through and through.

Another benefit of the psychoactive compound is its ability to calm hunger pangs in food-deprived bodies. Often, such people have difficulty digesting meals due to the sharp, stinging pain that comes with the sudden contraction of muscles in the stomach. By relaxing the gastrointestinal tract, Chemdawg Sour Diesel restores and encourages the appetite.

Suffice to say, growing Chemdawg Sour Diesel can be quite a handful especially for beginners. It is weak against problems caused by humidity such as mold and mildew. And, unlike other Sativa-leaning strains, its resistance to heat is not as high. Not only that, pests and strong gusts of wind easily topple the plant’s thin stalks.

For this reason, many prefer cultivating their batch indoors where it is less prone to diseases brought about by unpredictable factors such as weather and pestilence. Moreover, controlled environments allow aspiring growers to adjust important factors such as lighting, temperature, and humidity. With that said, Chemdawg Sour Diesel’s height necessitates early topping and other height management techniques that keep it from outgrowing its space. However, those with truly limited areas can shorten the vegetative period to keep the plant’s growth spurt in check.

At the moment, only feminized seeds of Chemdawg Sour Diesel are available. This means users may end up with at least half a batch of male plants. However, the chances of producing a calyx-filled female is higher when applying pre-germination techniques such as soaking or germinating a few extra seeds. Applying the Low-Stress Training method will also keep the plant from turning into a hermaphrodite.

It takes 10 to 11 weeks for Chemdawg Sour Diesel to fully mature indoors. It yields up to 16 ounces of buds per square meter.

In the northern hemisphere, Chemdawg Sour Diesel flowers between the last week of October. Although, it may sometimes extend to the first week of November depending on the climate. Under the expert care of a seasoned grower, each plant produces more than 16 ounces of buds.

Have you ever smoked or grown your own Chemdawg Sour Diesel? Please let me know what you think about this marijuana strain in the comments below.