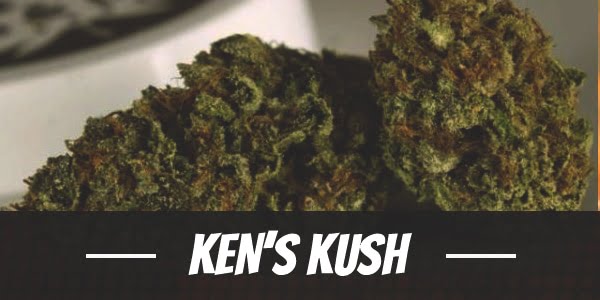 It would be distasteful to discuss Ken’s Kush without alluding to the highly esteemed, Ken Estes. The founder of Granddaddy Purple Collective is more than just an enthusiast. He is a prolific personality in the field of medical marijuana whose work remains groundbreaking even to this day.

In creating his namesake strain, Ken’s goal was to develop a version of his company’s namesake strain that could be used during the day. After all, a predominantly Indica strain like Granddaddy Purp comes with a heavy-hitting buzz. To which, the best choice was OG Kush – the backbone of many West Coast hybrids. It was later paired with Sour Diesel for its uplifting Sativa effects.

The three-way cross led to the creation of Ken’s Kush, a potent Indica-leaning bud that does not hinder users throughout the day. While its recreational effects are well-documented, the herb remains a medical strain that provides a reprieve against multiple mental and physical conditions.

Suffice to say, Ken’s Kush is a labor of love from a man who believes in helping patients manage their health problems through premium medical grade cannabis.

Though created for the medical community, recreational users can still get a kick out of Ken’s Kush. Lab results show the strain consistently testing between 18% to 20% THC regardless of the batch. Despite its potency, it remains true to the slow-setting onset associated with Indica-leaning hybrids.

Generally speaking, not many people notice the subtle euphoric rush of Ken’s Kush until after the behavioral changes have gradually begun. Its uplifting effects are marked by an upbeat disposition as users find themselves feeling happy from within. Some may even slip out a few giggles as even the littlest things seem totally amusing.

More than anything, the bud brings about a sense of calm that ebbs down to the body as well. Rather than an overwhelming heaviness, users find themselves deeply relaxed while the muscles are soothed. As tensions leave, some become aroused by the seemingly newfound sensation of freedom from inhibition. Although, if one were to use too much of the bud, the effects can lead to a debilitating couchlock.

Ken’s Kush has a berry scent that is accented by notes of sweet plum. Broken apart, it releases a spicy fragrance similar to its Sour Diesel parent. But, once combusted, a woody pine fills the room.

Once drawn in, flavors of grape and plum swarm the mouth with a tantalizing sweetness. Complementing it are subtle hints of berry enhanced by refreshing pine. On the exhale, it leaves a lingering skunky aftertaste.

Like other strain, Ken’s Kush comes with a side of dehydration. Its symptoms are most notable in the eyes as cannabinoids interfere with the production of moisture in the tear ducts. Users will most likely experience cottonmouth. Thankfully, both are barely noticeable and easily mitigated by downing a few glasses of water right after the session.

Anxiety is often associated with Sativa-leaning strains. However, overconsuming Ken’s Kush can trigger such an effect especially in worry-warts prone to feelings of dreadfulness. As such, marijuana must always be used well within one’s limits.

As a medical strain, Ken’s Kush comes with a variety of benefits. Its therapeutic value anchors itself in the combined effort of its THC, CBD, and other cannabinoids like terpenes. For example, its stimulating properties deliver a happy high that perfectly decreases stress levels.

Arguably, as an Indica-leaning herb, its best use is in relieving physical pain. In inducing a soothing buzz, it appeases various aches including ones that stem from hunger pangs. By relaxing the stomach, Ken’s Kush effectively restores the appetite so users with anorexia or cancer patients currently undergoing chemotherapy can eat in peace. Meanwhile, its anti-inflammatory properties reduce swelling and redness in the muscles.

After calming both mental and physical pain, Ken’s Kush lulls most to dreamland to help patients fully recover from their illnesses. Those with insomnia and other related sleeping disorders may also use the bud as a natural sleeping aid.

Ken’s Kush is not at all a tall plant. In fact, it fits most grow areas as it height averages between 3 feet to 6 feet. However, those with truly limited space may top the plant early or shorten the vegetative period to keep the plant from outgrowing its designated spot.

Aspiring growers may also need to prune and trim often. Apart from aesthetic reasons, grooming the plant will encourage better air and light circulation. Cutting away dead parts will also help nutrients travel to healthier budding sites. The Indica-leaning herb also responds well to the Sea of Green method and may even produce even higher yields.

With that said, Ken’s Kush is quite an easy grow. It is sturdy and is resistant to various problems caused by sudden drops in temperature, high levels of humidity, or being exposed to heat. For this reason, many home breeders can cultivate their strain outdoors to save money on expensive equipment such as lighting and ventilation systems.

Its buds take on the classic Indica structure as well. They are shaped like pebbles and come in different sizes. However, all share the same heaviness and density. Thickly coating the nugs are sticky resin and milky white trichomes with sparse orange hairs.

One thing though, the buds are only available in regular form. Hence, growers must germinate more seeds to ensure that at least more than 50% of the batch will be female. Pre-germination techniques such as soaking as well as growing method like Low-Stress Training will ensure plants turn into calyx-filled females.

Despite its Indica-leaning structure, Ken’s Kush has a long flowering period of 8 to 14 weeks. The long wait is worth it though, especially at the sight of its beautiful trichome-coated nugs. Once ready for harvest, it produces at least 10 ounces of buds per square meter which, under the expert care of a seasoned grower, can easily double or triple in yields.

Depending on climate and location, Ken’s Kush can flower as early as the second or third week of October or as late as the last week of November. Regardless, it yields more than 12 ounces of buds per plant.

Have you ever smoked or grown your own Ken’s Kush? Please let me know what you think about this marijuana strain in the comments below.