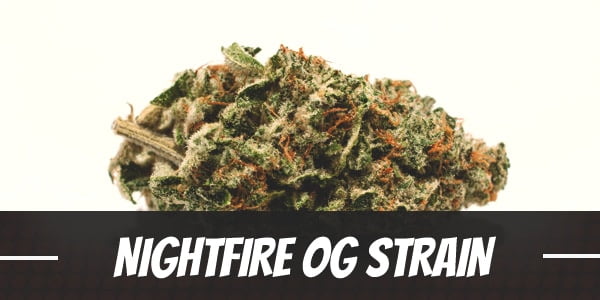 On its own, White Fire OG is a stunning herb. Drenched in a frosting of trichomes, its buds look like little snow balls that allude to its potency. Moreover, its lemon-flavored smoke with subtle diesel undertones induce an intense euphoric high that almost immediately uplifts users.

To enhance it, Sin City Seeds paired the slightly Sativa-dominant hybrid with White Nightmare. Like the former, it boasts milky white trichomes with an equally delicious smoke. However, what sets it apart from White Fire OG is its short flowering period that it conveniently passes on to its offspring NightFire OG – a bud that caught the cannabis industry’s eye for its bright green nugs despite a thick layer of crystallized sugar.

Like other strains from Sin City Seeds, NightFire OG is highly potent. It boasts THC levels of up to 23% that, when drawn in, delivers users to soaring new heights. Still, it lives up to its medical purpose by easing away symptoms of depression as well as crushing stress.

Like other Sativa-dominant strains, NightFire OG is fast-acting. Almost immediately after the first puff, it elevates and lifts users up in a cloud of euphoria. Most often bask in the brightened mood and happiness the bud induces.

Most casual users, however, take advantage of the upbeat disposition by getting to work. After all, the mental clarity does stimulate a rush of creativity. The ebb and flow of thoughts leads to groundbreaking ideas that, along with a keen interest, makes concentrating for longer periods of time easier.

The wake-and-bake qualities also translate to the physical as an uplifting sensation begins to trickle from behind the temples. Rather than break the streak of profundity, it enhances it by maintaining a relaxed state for users.

NightFire OG’s pungent fragrance can sometimes astonish users. In a good way, of course. It mixes berries and lemons with a refreshing note of pine that is quite reminiscent of air purifier, especially as the buds release a chemical scent.

Translating to NightFire OG’s flavor is its citric scent and woody notes of pine. It has the sweet flavor of ripe berries and lemons. On the exhale, it leaves an aftertaste of wet soil.

As with other all strains, NightFire OG comes with a bout of dehydration. Its symptoms are most noticeable in the eyes. Most likely, users will also end up with a cottonmouth especially as cannabinoids begin to interfere with the production of saliva. Though easily manageable, the dry spell can be quite uncomfortable to novices. In such cases, it is best to have a few glasses of water after the session.

In high doses, NightFire OG overstimulates the senses and leads to a highly keen awareness of one’s surroundings. Though rare, it can stun users with a feeling of paranoia. As such, marijuana must always be used with caution.

Sativas and hybrids that lean toward it elevate moods, energize, and invigorate users. For this reason, NightFire OG greatly helps with managing depression. It also provides comfort to patients dealing with other mental illnesses like PTSD.

At the same time, NightFire OG works effectively as a stress reliever. It calms both the fast-paced thoughts of a person dreading with anxiety while releasing any unwanted tension from the body. As such, the bud works great for addressing both mental and physical fatigue.

THC, apart from inducing the recreational high, is also a natural painkiller. Its soothing sensation eases away pressure from behind the eyes that, when left unrelieved, can lead to glaucoma. It also gets rid of headaches and other kinds of pains felt om other parts of the body.

Because of its finicky grow, NightFire OG is not for beginners. Its stalks are weak while its branches easily break off. Grown outdoors, the strain is easily affected by gusts of wind, sudden drops in weather, and high levels of humidity. Not to mention, pests may ravage the batch. Thus, while it performs phenomenally in gardens, many commercial growers prefer cultivating their plants indoors.

In such controlled environments, breeders can adjust various factors such as lighting and temperature, and air circulation. They can also keep them away from problems caused by pests. However, NightFire OG’s height requires management. To keep the plant short, aspiring growers may top the plant early and apply techniques such as bending and super cropping. These methods also encourage even higher yields from the already vigorous producer.

At the moment, Sin City Seeds has only made feminized seeds of NightFire OG available which means breeders will likely end up with at least half a batch of males. To increase the likelihood of producing a calyx-filled female, enthusiasts may either plant more seeds or apply pre-germination techniques such as soaking. Once it hits the flowering stage, Low-Stress Training will keep the plant from turning into hermaphrodites.

Compared to other Sativa-leaning strains, NightFire OG has a shorter flowering period of about 9 to 10 weeks. Using certain methods such as the Screen of Green can even lessen the blossoming phase by a week. With that said, it produces up to 18 ounces of buds per square meter.

In the northern hemisphere, NightFire OG blossoms between the second to the fourth week of October. Each plant yields at least 11 ounces of trichome-frosted buds.

Have you ever smoked or grown your own NightFire OG? Please let me know what you think about this marijuana strain in the comments below.