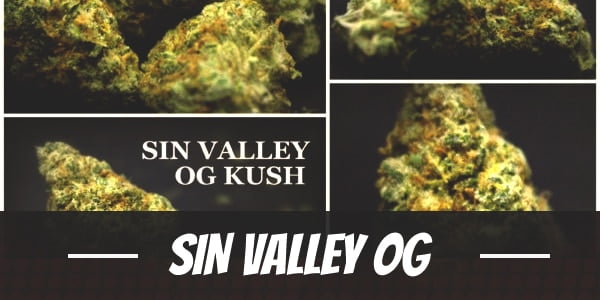 Sin Valley OG is a head-turning strain that has captured hearts of enthusiasts around the world. Its tangy lemon-flavored smoke leaves a unique aftertaste in the mouth. And, despite leaning slightly toward Indica, it balances out its Sativa genes to induces a well-rounded high.

In creating such an excellent hybrid, Sin City Seeds crossed the legendary SFV OG with their signature strain Blue Power. Both have incredible terpene profiles and uplifting effects but Sin Valley OG’s Indica genes are largely influenced by the latter. Meanwhile, its therapeutic value is an inheritance of the San Fernando Valley staple.

On its own, Sin Valley OG is as a powerhouse. Its THC levels do not dwell below 22% and, when used in excess, can be quite debilitating. Still, many use the strain for its kick especially thrill seekers.

Taking after its Sativa influence, Sin Valley OG is a fast-acting strain with an initial onset marked largely by a rush of euphoria. It boosts moods and, in doing so, leaves users feeling quite happy with themselves. Although, to users still building up their tolerance to THC, it can be like soaring to new heights for the first time.

Despite its potentially body-crushing buzz, many casual users remain productive by using the bud in moderation. After all, it does induce a clearheaded high that allow many to tap into their sense of creativity. With a heightened sense of focus, coming up with innovative ideas for each project becomes an easy task.

In due course, a light pressure surges from behind the temples and courses through the muscles. It intensifies with each toke until the user is enveloped in total physical relaxation. Keeping it from overwhelming the body is the strong mental effects from the beginning of the high.

For this reason, many enthusiasts use Sin Valley OG in the morning for its great wake-and-bake qualities. Still, its high THC levels have immense couch lock potential and must always be consumedog s in moderation.

Sin Valley OG smells like freshly picked lemons. It has notes of citrus with undertones of wet soil. Broken apart or combusted, a refreshing pine fills the air.

On the palate, Sin Valley OG bursts with an overwhelming citrus reminiscent of ripe oranges and lemons. Though tangy, a subtle sweetness melds both flavors well. On the exhale, the smoke leaves an aftertaste of wet soil and pine.

Use of Sin Valley OG is almost certain to cause dry eyes. In some instances, such reaction may also come with a moderate case of cottonmouth. Both are typical of marijuana and are often a rare cause for concern. Though unavoidable, their effects can still be reduced by hydrating with water before, during, and after a session.

Enthusiasts who overconsume Sin Valley OG may find themselves greening out, a condition characterized by temporary dizziness and anxiety. A small demographic of users may also feel a little paranoid especially when increasing dosage. Pacing and moderation, however, will keep such adverse reactions at bay.

Though presumably created for recreation, Sin Valley OG remains beneficial to the medical marijuana community. Its THC component, along with its CBD and other cannabinoids, retains its therapeutic value by providing a reprieve for certain mental and physical conditions.

The happy high it induces helps reduce stress levels. In reducing anxiety that comes with being chronically stressed, Sin Valley OG effectively changes negative outlooks into more positive ones. Moreover, it helps manage mental issues such as depression and PTSD by encouraging self-love and confidence.

Apart from the recreational high it induces, THC can also be used as an appetite stimulant. As such, one of the times to use the strain is right before a meal especially for patients with anorexia or those undergoing treatment for cancer. After all, the soothing sensation not only relieves external pain but also the sharp sting caused by sudden contractions in the stomach.

In promoting overall long-term wellness, the profound physical buzz eventually sedates people into a deep, unencumbered slumber. Apart from that, it enhances users’ quality of sleep so even those with insomnia can feel well-rested.

Sin City Seeds believes that, to earn the respect of the cannabis growing community, they have to produce high quality seeds. As such, it comes as no surprise that Sin Valley OG, coupled with its excellent Indica genes, performs well regardless of where it is grown. Still, many prefer cultivating their strain indoors to keep unpredictable factors such as weather and pests from spoiling the batch.

Sin Valley OG is not a tall plant. It fits in most growing spaces and rarely ever needs its height managed. It is, however, quite bushy and may require a few trims here and there. By cutting away any dead parts, pruning helps nutrients maximize healthy budding sites. Meanwhile, the herb’s immaculate genetics readily adjusts to a plethora of mediums including soil and hydroponics.

One thing though, Sin City Seeds has only released Sin Valley OG in regular form. This means that at least half a batch will grow into males. Planting more seeds, as well as applying pre-germination methods such as soaking, will increase the likelihood of producing females. Low-Stress Training will keep calyx-filled females from turning into hermaphrodites.

It takes around 9 to 10 weeks for Sin Valley OG to finish flowering. However, applying the Sea of Green method can shorten the flowering period by at least a week. Once ready for harvest, it yields 12 to 17 ounces of buds per square meter.

In the northern hemisphere, Sin Valley OG flowers around the second to third week of October with each plant producing at least 12 ounces of buds.

Have you ever smoked or grown your own Sin Valley OG? Please let me know what you think about this marijuana strain in the comments below.