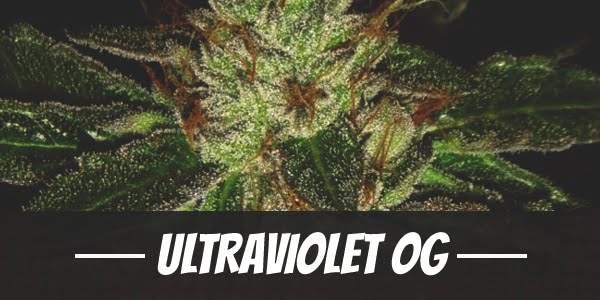 Purple Indica was once the life of the party among Seattleites from the late 1980s. As their cannabis connoisseur circle grew, so did the pure Indica’s fame. Of course, its phenomenal stardom was not without its merit. The bud delivered a stress-crushing body buzz that could not be matched. Not only that, it retained appeal among growing enthusiasts for its stunning short and sturdy structure and its beautiful colored flowers.

Archive Seeds later took a female Purple Indica and paired with their male Face Off OG. Though fairly new at that time, the latter’s euphoric mental high gave it an edge among most Indica leaning varieties. Moreover, its body buzz almost equaled the former in terms of strength.

But before pairing them together, Archive Seeds first backcrossed Face Off OG to intensify its effects. The result was UltraViolet OG, an impressive Indica-leaning hybrid that does its parents justice. It boasts intense levels of THC that consistently test between 19% to 21% with the quick flowering period and hardiness of North American landraces. Plus, the plant produced aesthetically pleasing buds.

Being an Indica, UltraViolet OG is a natural creeper. Its effects do not take hold until after a few minutes from the first hit. But, when it does, it begins with a subtle cerebral buzz that leaves users feeling happy as it intensifies with each puff.

Most casual users remain productive throughout the high. Many find that the mood-enhancing effects and calm disposition pair well when it comes to clearing the mind. With thoughts flowing freely, it becomes easier to tap into one’s innate sense of creativity and stay focused on tasks.

In time, a warm fuzzy feeling drips down from the temples and drapes the body in an uplifting sensation. Though quite heavy on the limbs, the light pressure is quite soothing and relaxing.

Despite its high levels of THC, UltraViolet OG is not at all overwhelming when consumed with caution. Used in excess of one’s tolerance, however, and the potent Indica-leaning bud can render users completely dysfunctional as it glues them to their seats.

UltraViolet OG has a pungent scent that, once the container is opened, its pleasant overtones of violets fill the air. Complementing it is a subtle herbal sweetness and notes of wet soil. Released once the buds are crushed and broken apart is a floral yet chemical scent.

Carrying over to UltraViolet OG’s flavors are its floral overtones of violets and undertones of earth. Blending with it is the sweet taste of ripe apricots with refreshing hints of pine. Although on the exhale, the bud leaves a faint chemical aftertaste.

UltraViolet OG usually comes with a few side effects including two of the most common – dry eyes and a cottonmouth. Both are barely noticeable and easily mitigated by drinking water. However, overconsuming the strain can lead to a bit of dizziness and possible paranoia. For this reason, marijuana should always be used with restraint.

Presumably, UltraViolet OG was created with a recreational purpose in mind. After all, that has been the perspective of marijuana among many regardless whether their assumptions are correct or not. Still, the Indica-dominant herb is not without its medical benefits. Through the combined efforts of its THC, CBD, and other cannabinoids, it provides a reprieve against a myriad of mental and physical conditions.

A natural stress reliever, UltraViolet OG comes with a cerebral buzz that has mood enhancing effects. It calms the fast-paced thoughts of people overwhelmed by their inability to focus such as those with anxiety, ADD, or ADHD. By centralizing the mind’s processes and stabilizing emotions, managing mental health issues like depression and PTSD becomes easier.

The same compound also stimulates the appetite. As such, one of the best times to use the strain is right before a meal. Moreover, its ability to ease pain in the gastrointestinal tract also translates to the rest of the body. The soothing sensation also relieves symptoms leading to glaucoma like intraocular pressure.

Having a good night’s rest is an important part of the healing process. After all, those suffering from a lack of it may find themselves more prone to irritability, heart problems, stress, anxiety, depression, and even stroke. Through its potent pain-relieving and sedative properties, UltraViolet OG promotes better sleep quality so users feel refreshed as they rise the next day.

PNW Purple Indica greatly influenced UltraViolet OG’s structure. It is naturally stout and quite dense. Not only that, it is as sturdy as the pure Indicas of the Pacific North West and other landrace strains of North America. As such, it can withstand a variety of problems caused by humidity such as mold or mildew.

What UltraViolet OG cannot stand, however, are extreme cold and heat. In such cases, the plant’s roots may become water-logged or, worst, die off from heat stress. Moreover, in the outdoors, the batch is exposed to pests. Due to the unpredictability of a variety of factors, many growers prefer cultivating their strain indoors.

In such controlled environments, plants are less exposed to sudden changes in climate as growers can easily adjust factors like lighting, temperature, and humidity. However, its wideness and bushiness necessitate trimming. Apart from aesthetic reasons, it promotes better air and light circulation. Pruning also removes dead parts of a plant so nutrients can focus on creating healthier budding sites.

Once mature, growers may opt to expose their batch of UltraViolet OG to slightly lower temperatures to bring out stunning flashes of purple in both the leaves and the buds. One thing though – Archive Seeds only released regular form of its seeds. For this reason, breeders may need to apply Low-Stress Training techniques to keep calyx-filled females from turning into hermaphrodites.

UltraViolet OG takes exactly 9 weeks to flower. It yields 10 to 12 ounces of buds per square meter.

Garden-grown UltraViolet OG yields at least 12 ounces of buds per plant once it blossoms by the second or third week of October.

Have you ever smoked or grown your own UltraViolet OG? Please let me know what you think about this marijuana strain in the comments below.