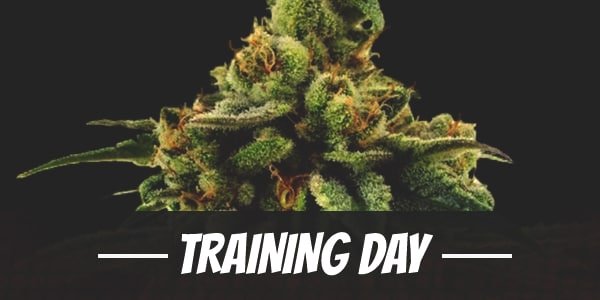 Most Indica-leaning strains are known for their heavy-hitting high that, in all likelihood, will leaves users slumped on their couches. However, this is where Training Day defers. It pairs its total body relaxation with a mental jumpstart in spite of its potent levels of up to 21%.

Nothing short is to be expected of the DNA Genetics prodigy though. In creating it, the breeders took LA Confidential for its soothing body psychedelic high, amazing terpene profile, and great growth profile. It was then paired with the mind-boggling Trainwreck which influenced Training Day’s cerebral stimulation and creative buzz.

While its recreational effects are well-documented, Training Day is of value to many patients from the medical marijuana community for providing a reprieve a variety of mental and physical afflictions.

Training Day’s effects begin with a building body high. However, it is barely noticeable due to the overlapping, prominent cerebral effects of the initial onset. Still, many users feel engulfed in an unparalleled feeling of relaxation that often helps the gentle, euphoric buzz seep into the deepest recesses of the mind.

The mental clarity, along with a budding happiness, completely transforms one’s disposition. It lightens and brightens the mood while stimulating the mind so thoughts can flow freely. To casual users, the surge of creativity allows one to form innovative ideas during brainstorming sessions at work. And, with a heightened sense of focus, many stay motivated to finish tasks.

In time, the Indica effects start to intensify. Thankfully, it is not at all sedating and rarely ever inhibits the wonderful wake-and-bake qualities of Training Day. Rather, it keeps tiredness at bay so users can concentrate for longer periods of time.

LA Confidential has a strong influence on Training Day’s fragrance. Like the former, it has a pungent earthy scent complemented by refreshing notes of pine. Crushed and combusted, a faint hint of citrus becomes obvious.

Much like its predecessor, Training Day tastes has a predominantly earthy flavor. Blending with it is the woody taste of pine. On the exhale, its citric aftertaste takes center stage as it lingers in the palate even after the last puff.

Dehydration is an unavoidable side effect that comes with using marijuana. It is usually reflected in the eyes. But, as moisture-inhibiting cannabinoids begin to interfere with the production of saliva, users end up with a cottonmouth too. Thankfully, both are minor setbacks that do not negatively affect one’s experience with Training Day. Moreover, the dry spell can easily be remediated by having a few glasses of water.

Overconsumption can bring about increased anxiety and either temporary dizziness or a mild headache. For this reason, Training Day must always be used in moderation.

At up to 1%, Training Day already has higher CBD level compared to other recreational strains. However, it is not enough to address symptoms of epilepsy and other similar conditions. Still, the herb is not without pharmacological value.

Its high levels of THC, coupled with other cannabinoids like terpenes, make for an effective painkiller. At the same time, it reduces any swelling and redness found in inflamed areas. By inducing a soothing body high, Training Day relaxes any contracting muscles that cause turbulence in the stomach. Together with its anti-emetic properties, it reduces nausea in cancer patients going through the harsh aftereffects of chemotherapy.

Stress and depression are two conditions that go hand-in-hand. The former usually accelerates the onset of the latter or exacerbates it and vice versa. Through its happy high, Training Day manages the overwhelming dread or anxiety that usually comes with having such issues. At the same time, it enhances the mood and stabilizes users with mental health issues like PTSD.

Training Day grows much like other Indica-dominant strains. It has a short stature with thick branches that can withstand strong gusts of wind while carrying the weight of its heavy buds. The plant also has a strong resistance against problems like moisture and fluctuations in weather.

Outdoors is arguably the best place to cultivate this strain. There, the fertile soil brings out its full flavor as it soaks up nutrients from the sun. It is well-aerated too. However, many growers from the northern hemisphere prefer placing their batch inside greenhouses and other less volatile environments.

With that said, the herb tends to expand during the final weeks of the vegetative stage. For those with limited spaces, it is best to top the plant early and apply growing methods like the Sea of Green that can maximize Training Day’s branchy structure. Plus, both hasten the flowering period and even increase the plant’s already high yields. For commercial breeders with indoor setups, hydroponics system is a great option for producing ‘cleaner’ buds.

DNA Genetics has made seeds of Training Day available in feminized form. This makes it a great beginner’s strain as it takes away the complexity of putting systems in place to ensure that more than half of the batch is female.

Training Day has an indoor flowering period of 7 to 9 weeks. Once mature, it yields at between 14 to 18 ounces of buds per square meter.

In the northern hemisphere, Training Day flowers from the last week of September to the second or third week of October. A vigorous producer, it yields at least 18 ounces of buds per plant.

Have you ever smoked or grown your own Training Day? Please let me know what you think about this marijuana strain in the comments below.