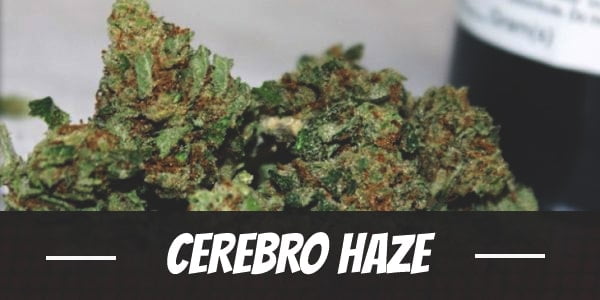 Procuring details about Cerebro Haze may prove to be tricky since its original breeder remains anonymous at this time. However, what is known is that this highly cerebral hybrid is a cross of two rare yet equally exceptional strains.

Tom Hill’s Haze or simply “the Haze,” is arguably the best Sativa of all time. Itself a cross of pure breeds from Mexico, Colombia, Thailand, and India, it could have been lost forever were it through the effort of some individuals who kept its lineage alive. Since resurfacing in the Netherlands, it has made its way back to the United States. Consequently, an unknown individual used it to serve as one of the genetic bases of Cerebro Haze.

One of the likable touch introduced to the Haze genetics is the addition of Indica genes. And among the many choices, the unnamed breeder decided on Brain OG (sometimes referred to as Snoop’s OG). A phenotype of the West Coast legend OG Kush, it comes with a high amount of THC. Although it did not alter the growing traits and characteristics of the plant itself, it did contribute physically relaxing effects. More than that, it also passed on the classic OG flavors of lemon and diesel.

The noteworthy mash up created a nicely balanced potent strain that is known to beat pain without beating the user down the couch. Unfortunately, this unique hybrid is quite challenging to get ahold of and has remained elusive.

This strain deviates from its Haze lineage in as far as potency is concerned. While the former packs a punch and could slam into users hard, Cerebro Haze itself is the gentler version. At its onset, it sends people on a clear-headed high that is marked by a heightened sense of focus. It unleashes the inner mind and inspires somewhat free-flowing thoughts and ideas.

Along with the mental clarity and heightened senses, the strain also delivers a revitalizing boost that encourages activity. It does not only help brighten up the day, but also make users feel energetic and motivated to stay productive. Best of all, and throughout the psychedelic high, it leaves people feeling cheerful and contented.

The Indica side of Cerebro Haze may be a minority at some 20%, but its effects seem to indicate it is much more than that. In fact, its ability to induce full-bodied relaxation is a testament to the greatness of its OG genetics. In soothing the muscles and melting tensions, though, it does not cause laziness or let alone the lethargic feel.

A pungent earthy aroma highlights the scent of Cerebro Haze. And, it sends forth big chunks of pleasant lemon fragrances and spots of spiciness that is reminiscent of OG Kush.

The zesty taste of lemon with herbal overtones bursts in the palate together with its creamy smoke. Upon exhale, tingly hints of diesel and spicy flavors are evident.

Adverse effects such as cottonmouth do occur during marijuana use, irrespective of the strain. Likewise, so are the eyes feeling dry. Its symptoms though could be more profound with increased dosage. However, such conditions are only temporary. Hydrating is one way to alleviate.

One thing that users should also be aware of is that even if it is not incredibly potent, Cerebro Haze has the potential to cause paranoia or anxiety. It is best not to underestimate this strain and use within reason.

Able to deliver a profound uplifting high, Cerebro Haze is effective in wiping out stress. It can also offer people a reprieve from depression. Moreover, the anti-psychotic properties in its CBD compound could also be helpful in dealing with bipolar disorders.

Throughout the mentally stimulating clear-headed high, its ability to sharpen focus can help people with ADHD/ADD.

THC is an appetite stimulant. While recreational users may not see it as much of anything but cravings for food, medical users could find it invaluable. For example, some patients undergoing chemotherapy may need a little boost in appetite.

Used in moderation, Cerebro Haze delivers pretty-much balanced effects. Some people, though, could opt to use a tad bit more. Doing so can only intensity the psychoactive properties. As a result, it also heightens the ability of the strain to induce drowsiness. Insomniacs, for instance, could use it a couple of hours before bedtime. It may keep one active during the onset, but as the Indica properties kick in, the body relaxing high soon leads to quality sleep.

Home growers can cultivate Cerebro Haze indoors or outdoors. It has a stretchy structure with tiny, spade-shaped nugs. These dark olive-green buds are covered with hairy orange pistils and sticky resin.

It could take this plant some 10 to 12 months during flowering before it is ready for harvest. Although lengthy, it also rewards tireless effort with some 12 to 16 ounces of buds.

Harvest time in the northern hemisphere typically falls during late October or early November. Each plant could produce at least 16 ounces of flowers.

Have you ever smoked or grown your own Cerebro Haze? Please let me know what you think about this marijuana strain in the comments below.