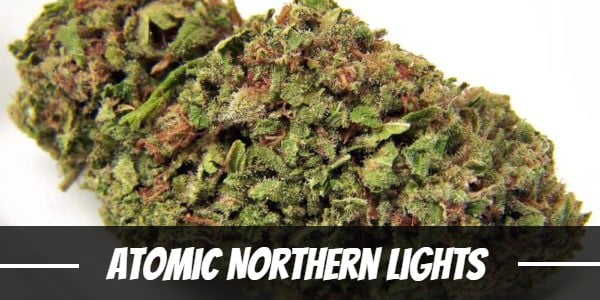 Atomic Northern Lights is a lush indica dominant hybrid that represents its lineage well. This sweet and pungent bud will make you feel more alive than ever, and will inspire you to feel positive and motivated, grinning your way through its entire high, without being able to stop.

Atomic Northern Lights is a strain that has quite the interesting story. In the 80’s Afghani indica seeds were bred with Thai Haze when they were brought to the United States. What resulted is the famed Northern Lights, which was then developed by Sensi Seeds and eventually crossed with a third strain.

The result is an indica dominant hybrid that flowers quickly, and Atomic Northern Lights was finally born. Judging by the fact that its parent strain Northern Lights was a three-time Cannabis Cup winner, you are promised an amazingly uplifting plant that will play to both your mind and body senses.

Atomic Northern Lights’s ultimate talent is that of being happiness inducing. You wont be able to resist this strain’s siren song into a lighter and more laid-back mood, as it can infect anyone. You will feel chilled out and will want to be more social and just enjoy everyone’s warm and fuzzy vibrations.

This plant will keep you in a euphoric state to last you almost for its entire duration. Atomic Northern Lights will make you want to bounce around sharing laughter with your friends, and will encourage you think outside of the box and be inspired by your own ideas and thoughts.

Atomic Northern Lights can make you feel hungry, so be ready for the munchies. You will float on an imaginary cloud of bliss, and feel utterly relaxed when smoking this plant. Until the very end you will feel uplifted, and will venture out if you aren’t already too deep into the haze and get stuck on the couch instead.

Atomic Northern Lights is a sweet smelling plant that is recognizable by its aroma alone. This fragrant bud smells like a collection of earthy and floral notes, mixed in with shocks of pine. A pungent scent dominates its presence, leaving everything ultimately coated in a blanket of sweetness.

Atomic Northern Lights is a sweet smelling plant that is recognizable by its aroma alone. This fragrant bud smells like a collection of earthy and floral notes, mixed in with shocks of pine. A pungent scent dominates its presence, leaving everything ultimately coated in a blanket of sweetness.

Atomic Northern Lights has some side effects that can distract from its other traits. Most users have reported feeling dry mouthed when smoking this strain, with a high likelihood of your eyes feeling dry and itchy, as well, prompting you to feel parched.

Other side effects when smoking this strain include a mild dizziness, which is why it is recommended for a novice user to take it easy when first trying this strain. Atomic Northern Lights can also make you feel slightly paranoid, and in rarer cases will leave you with a mild headache.

Atomic Northern Lights is a very potent medicinal strain that is known for being the cure-all to many common conditions today. If you suffer from chronic pain, this strain may be the answer to all your prayers, as it is a powerful painkiller, and can reduce inflammations, making it ideal for the use in treating arthritis.

This plant can also reduce feelings of depression greatly, allowing patients to feel more motivated in their day to day lives. Atomic Northern Lights can also allow these patients to sleep better, and fights the insomnia by relaxing them from head to toe until they are ready for a night of rest.

Atomic Northern Lights is popular among cancer patients to be used against radiation-induced nausea, that makes them lose their appetite, slowing down their progress. Chronic headaches are also well treated with this strain, and are greatly reduced when smoked regularly.

Atomic Northern Lights is happiest outdoors when exposed to a warm and temperate outdoor climate it can thrive in. It generally has a short flowering period, usually clocking in at around 8 weeks, and is resistant to most common molds and mildew.

Atomic Northern Lights grown indoors can be expected to yield an average of about 11 ounces of bud per square meter planted. This strain can take an estimated 8 to 9 weeks to mature and be ready for a harvest.

Atomic Northern Lights grown outdoors can yield an average of about 14 ounces of bud per plant, and can be expected to be ready for a generous harvest around the middle of October.

What is the Atomic Northern Lights strain yield?

How much THC does Atomic Northern Lights have?

What are the origins of the Atomic Northern Lights strain?

Have you ever smoked or grown your own Atomic Northern Lights? Please let me know what you think about this marijuana strain in the comments below.