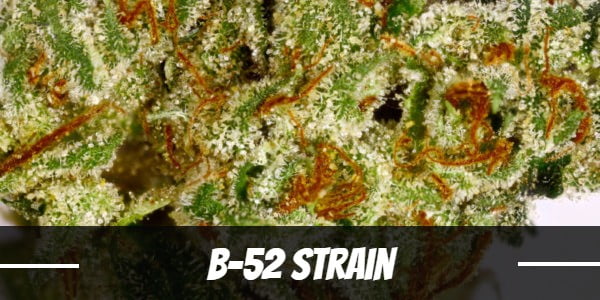 Nothing strikes fear into the hearts of enemies than to know there is a B-52 flying overhead. For over five decades, these aircraft have undergone one after the other transformation as new technologies develop. In a sense, each of these massive bombers carries with it hell itself.

Oh wait, for those who live through the good times in the 80s, they could be thinking of B-52, not the bomber, but the band. Who can forget the era of new wave with hits like Rock Lobster and Love Shack?

So, what do the bomber and the music band have anything to do with the marijuana strain?

The B-52 strain comes with the destructive power of the bomber and sends users into a frenzy oozing with energy.

In a sense, the B-52 is an enhanced version of the classic Skunk No. 1. By crossing it with Big Bud, it also inherited its ability to produce large buds and high yields.

From Skunk No. 1, the B-52 inherited its incredible Sativa effects that even if it is predominantly an Indica strain, its mental effects are more pronounced.

The choice of using Big Bud, on the other hand, may have something to do with the gentle nature of its Indica effects. And we have to mention it again – massive yields. Big Bud, itself, produces exceptional large thick buds, which means we can expect almost the same thing from the B-52.

As alluded to, the B-52 is a massive bomber that carries with it a wide array of arsenals. Think of the large thick buds of the strain as the bombs that when dropped, all hell breaks loose. Of course, we mean that in a good way.

We don’t currently sell B-52 seeds. Check out other indica dominant seeds in our marijuana seed bank.

Once the bombs, err the buds, detonates, it hits users with a force that disrupts the negativity. In no time at all, a strong surge of uplifting sensation envelopes the whole body. At the same time, it also induces people to feel happy and especially elated.

It does not stop there, though. As the effects start to creep into the body, most users still feel energetic. If there is nothing else to do, why not use that energy and dance to the beat of the Rock Lobster?

As the Indica property starts to make users feel relaxed, it does not cause a mental haze. Instead, most users at this point would have a clear head and insane ability to focus.

One thing, though. The B-52 is going to make users drink a lot of water.

Anyone who has used Skunk in the past will recognize the aroma of B-52. In fact, it is so much alike that some may even mistake this strain as its parent strain. The hybrid, featuring the classic smell of skunk and earth combined, also has a very pungent odor.

The B-52 strain’s aroma carries over to its taste. It does so without an overwhelming flavor that some people may dislike. It also has a sweet lingering aftertaste with a hint of wood.

One of the best things about this strain is that it does not come with much side effects as others. In fact, the only thing it can do is to cause dry mouth and in some cases, also dry eyes. Both of these conditions, of course, are typical with the use of cannabis.

If there is anything to bomb and destroy, then the B-52 can blow away stress to kingdom come. Throw in headaches as well, and it gets destroyed too. So, the combination of its mental and body effects makes it effective in reducing stress, which in turn makes it useful in dealing with depression.

We don’t currently sell B-52 seeds. Check out other indica dominant seeds in our marijuana seed bank.

After a massive run, pilots return to bases feeling hungry after long hours up in the sky. Of course, after being assaulted by an intense but beautiful high, users also tend to have severe cases of munchies. Obviously, this benefits people who have issues with poor appetite.

Finally, as the body starts to settle down, it cannot be helped but to feel sleepy. In this way, it helps people get quality sleep.

Lovers of Skunk strains must drool at the prospect of a massive yield of buds. The great thing about this plant is that it grows well outdoor and indoor.

Outdoor, this cannabis plant grows well in a Mediterranean climate. But its pungent odor is a concern, but that is not to say that it is not a problem indoor.

The Blintz fills the palate with a cheesy flavor before bursting with the taste of creamy berries. Read our full review!

Of course, it has to be taken care of, and the best way to do that is to use a carbon filter. While at it, it’s good to mention that B-52 grows well in hydroponics and adapts to the Sea of Green technique.

All it takes is 8 to 10 weeks before it starts to flower. Once it reaches maturity, each square meter containing 16 plants should produce 21 to 25 ounces.

B-52 starts its flowering stage late in October. Upon maturity, growers can expect to harvest at least 25 ounces per plant.

FAQ About B-52 Strain

What is the B-52 strain yield?

What are the origins of the B-52 strain?

B-52 was created from a mix between Skunk No. 1 and Big Bud.

Have you ever smoked or grown your own B-52? Please let me know what you think about this marijuana strain in the comments below.