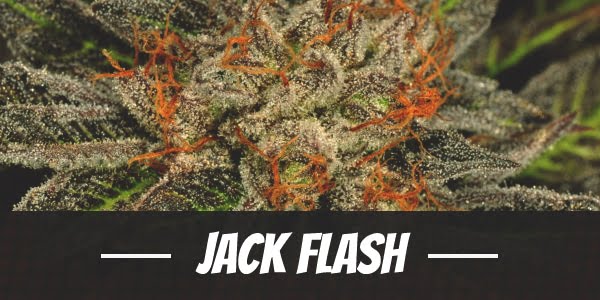 Once upon a time, Iris West wrote on her blog about how believing that somewhere out there, there is something that inspires hope and how we should believe in the impossible.

Above is a reference to one episode of the popular TV series, The Flash 2014. It is a fitting introduction when considering that the name of the strain we have here was named after its impossibly fast speed.

Feeling down and in a sour mood? Feeling lethargic? Or perhaps feeling unimaginative and black? Jack Flash is here to literally inspire you to throw away those negative feelings and take you to a new high in no time at all. In fact, this strain is so named because of how fast it could do that.

Jack Flash is a Dutch High Life Cup winner back in 1998. It goes without saying that this strain has made a name for itself since it was bred by Sensi Seeds. It also comes with a pedigree too. Sensi Seeds used an award-winning strain Jack Herer, and crossed it with two other strains, Haze and Super Skunk.

In no time at all when you start smoking Jack Flash and true to its name, it starts to hit you beginning by a sudden head rush that many users have reported or described as psychedelic. This is definitely not the best strain to start with as a beginner to cannabis.

After some time, around half an hour, the psychedelic rush subsides leaving you with a sustained uplifted mood and feeling extremely happy about anything. For a group of seasoned cannabis users, this is a great strain to use together. Aside from the good mood, it also gets the creative juices in your brain flowing. In other words, it boosts your creative thinking process. Physically, you also feel energized, but that may be replaced an hour or two later when the sedative property starts to creep in leaving you feeling lethargic or even lazy.

BUT, in some cases, it works the other way. Rather than wanting to go to sleep, some users have also reported that Jack Flash leaves them with an elevated level of libido. So, if you are thinking of getting laid with your partner, this might be a good strain to use earlier to set the tone for you know what.

One other benefit for some consumers of Jack Flash is that it may stimulate a better appetite. It means that it would be good to have some food around, which is convenient rather than having to go out to pick up some food while your mind is drowning in a sea of happiness.

Jack Flash has a strong pungent and earthy fragrance that is distinct. An undertone of citrus could also be detected. Although it could be described as not the most pleasant in all cannabis strains, it still has what is considered a universally acceptable odor.

While some impressions of Jack Flash include the overpowering odor that it has, its taste is more subdued. Definitely, you will detect the sweet citrus taste with an undertone of some kind of exotic wood. Chances are high that you will find its taste pleasant to your taste buds.

Because of the potency of this strain and the psychedelic cerebral high, it is important to use this strain conservatively and not to smoke too much. Like all other cannabis, you are bound to experience dry mouth and dry eyes. Those are the two most common and typical reactions.

Other than that, there is not much concern except for those who smoke above their tolerance limits and might have bouts of mild headaches and dizziness, as well as feeling paranoid.

Do you need a quick fix for the stress you are dealing with and managing the depression you had been battling? Jack Flash does that and it does it in lightning fast fashion. Be mindful too that this is a potent strain that must be used in moderation or smaller quantities.

Aside from helping with the management of mental issues, Jack Flash is also popular among those who wants to have a quick relief from mild chronic pains, including headaches and migraines.

Jack Flash is a cannabis plant that could grow tall featuring long-fingered green leaves with roundish buds covered by sticky resins. While it is easy enough to grow, there are works needed such as trimming.

Sour Jack’s aroma is pretty intense but in a good way. The strain has a pungent fuel smell coupled with its signature sour odor that it more lemony and citrusy in nature.

It could also be grown outdoor and indoor using soil or hydroponics. Requiring some 9 to 11 weeks to flower, this is one area where it is anything but lightning quick.

Grown indoor using hydroponics, Jack Flash would thrive if you have the proper set up including the use of indoor grow tent and adequate grow light. It is also suitable for the Screen of Green (ScrOG) growing method and in 9 to 11 weeks, would give you a yield of 12 to 16 ounces per square meter.

Grown outdoors in a sunny Mediterranean climate, Jack Flash should do well and give you a yield of 20 ounces or more per plant by harvest time sometime in late October to the early parts of November.

Have you ever smoked or grown your own Jack Flash? Please let me know what you think about this marijuana strain in the comments below.