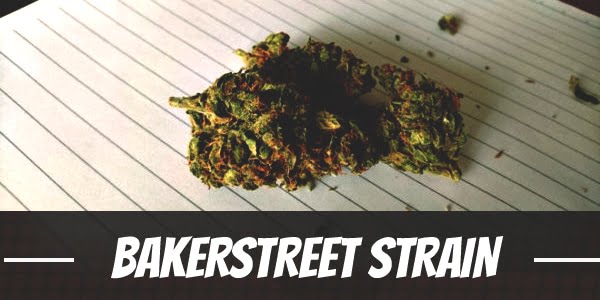 High up in the mountains, right in between the border between Pakistan and Afghanistan, are some of the most powerful Indicas that have ever existed – the Hindu Kush. Once word of their legendary potency spread, many breeders commissioned cannabis explorers to cross the seas and climb the mountains in order to obtain clippings of the landrace strains. Today, it has become a staple in dispensaries all over the world.

One such breeder that took ahold of a variety is Tweed, a licensed producer of medical cannabis in Canada. It is not known if there were any enhancements done on the Hindu Kush genetics, but they did release a variety named Bakerstreet.

Fans of Sherlock Homes may recognize the name as the street where the fictional detective lived. Nevertheless, there is nothing mysterious about the strain at all. Apart from providing relaxation, it also offers a host of medical benefits.

With 17% THC level, Bakerstreet has an above average potency. It sends users on a pronounced psychedelic high that begins almost immediately after the first toke. It quickly enhances the mood after ushering in a euphoric cerebral buzz. These effects, though, are not enough as to cause debilitating effects. In most cases, the feeling is more akin to that of enlightenment.

It takes several minutes before the physical effects of Bakerstreet become evident. A tingling sensation from the temple ebbing down to the body announces its presence. As it spreads, users start to feel tensions leaving and muscles relaxing.

The Indica properties of Bakerstreet does not cause extreme laziness or lethargy. However, it does make the limbs feel limp with heaviness. As users find themselves enveloped by gentle waves of calming and uplifting sensation, most people tend to feel drowsy.

Despite being a pure Indica strain, the cerebral effects brought on by Bakerstreet is a pleasant bonus. In moderation, the exceptional qualities of the physical effects complement the mental high. However, used excessively, it is entirely possible that some people may experience crippling rapid thoughts.

Bakerstreet has a fragrant, earthy aroma with woody undertones. To a certain degree, it is similar to sandalwood but a lot milder and sweeter.

Just as delightful to the palate is the mixed taste of earth, sage, and herbs. At the first toke, a refreshing burst of pine washes over the mouth and leaves a sweet aftertaste with a hint of diesel.

The most common adverse effects that come with marijuana use have to do with dehydration. Usually, it reddens the eyes and takes away moisture in the mouth. Thankfully, these are nothing serious. Although rare, Bakerstreet can also cause users to feel a little paranoid.

Although Bakerstreet has low CBD values, its psychoactive compounds, as well as its other cannabinoids such as the terpene myrcene, are enough to soothe muscles and ease muscle tension. As such, it is attractive to those looking for relief from bodily aches and pain. Similarly, the strain can be used to appease redness and swelling of inflamed areas. The relaxing body buzz can also help calm the nerves of those diagnosed with anxiety.

Bakerstreet can be a source of comfort for those going through depression and PTSD. Its psychoactive compounds induce a happy high that turns users into balls of happiness overflowing with positivity. Those without such mental afflictions may opt to use the strain to wipe out any accumulated stress and negativity.

Bakerstreet is excellent as a natural sleep aid. That is because one of the terpenes, myrcene, causes drowsiness.

Bakerstreet, through evolution, is accustomed to the harsh conditions of the Hindu Kush region. It is a sturdy and resilient plant that can withstand abrupt changes in the temperature. For that reason, it thrives well regardless if planted indoors or outdoors. Tweed, though, did not release its seeds to the public.

Although theoretically, the Hindu Kush plant from other breeders is technically the same as Bakerstreet, the qualities may differ – unless it is a clone of the original possessed by the company.

Grown inside the greenhouse, Bakerstreet has a flowering period of 8 to 9 weeks. It could be cut down by one week under expert care and the use of specialized indoor gardening equipment. Once ready, it should produce some 10 to 12 ounces of buds per square meter.

If planted outdoors, the plant should transition to bloom phase by early October. Harvest is possible before the month ends with each plant producing up to 12 ounces of frosty buds.

What is the Bakerstreet strain yield?

Bakerstreet yields 10 to 12 ounces per square meter indoors and 12 ounces or more per plant outdoors.

How much THC does Bakerstreet have?

What are the origins of the Bakerstreet strain?

Bakerstreet originated from the mountainous region between the Afghanistan and Pakistan border, as a variation of the Hindu Kush strain.

Have you ever smoked or grown your own Bakerstreet? Please let me know what you think about this marijuana strain in the comments below.