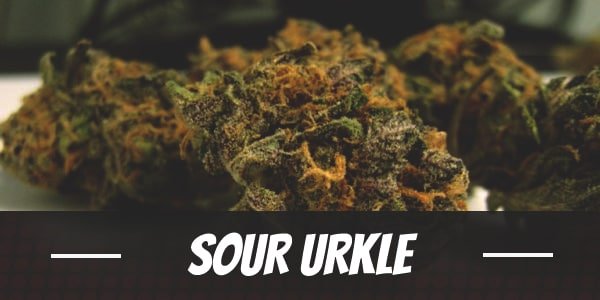 Sour Urkle is the result of a union between the famous Sour Diesel and Purple Urkle strains. As can be expected, it boasts of not only the distinct fragrances of the parents but also the remarkable effects.

Individually, each of the parent strains has distinct traits or strengths. For instance, Sour Diesel is notable for its euphoric but dreamy cerebral high. Although exceptional, its ability to put one at ease cannot compare to Purple Urkle.

On the other hand, Purple Urkle can indeed induce complete relaxation and put one to sleep. At no time can it gives users the same energetic buzz that Sour Diesel could.

In combining the genetics of those two, the resulting balanced offspring can now give users the best of both worlds.

Search for the most underrated marijuana strains, and Sour Urkle seems almost to make that list all the time. It is a pity, though, as the experience it provides is nothing short of extraordinary.

Soon after the first toke, Sour Urkle wastes no time in delivering a euphoric rush into the head and the body. Apart from enhancing the mood, it energizes users. Such cerebral high is pronounced but not overwhelming. For most people, including beginners, it does not have any debilitating effects that can hinder productivity. Even in higher dosages, it does not cause an intense buzzing that some may find overbearing. Instead, it may lead to a foggy mind with a dreamy quality.

Later, the Indica properties of Sour Urkle begins to manifest. Aside from keeping the cerebral effects stable, it also brings distinct benefits. It starts with a warm buzz that spreads from the head down to the body. Gradually, this results in tension leaving the body as muscles relax.

The beauty of the psychedelic effects of Sour Urkle is that even as it leaves users feeling relaxed, it does not have any sedating effects. In fact, most people not only continue to have a clear head but also very capable of locking in on tasks.

At 19% THC, Sour Urkle is an incredibly potent hybrid. However, it does an excellent job of balancing both ends of the spectrum in which none becomes too extreme. As such, it delivers the high most people would not find underwhelming. Keep in mind, though, that overindulging may lead to laziness once the physical effects have fully crept in.

Describing the fragrance of Sour Urkle is complicated. Like its genetic structure, the aroma emitted by this hybrid is a blend of contrasting odors. A sweet and fruity note of berry is evident as it blends into the same pungent smell of Sour Diesel. This sophisticated combination of fragrance may take some time getting used to, though. It may also be one of the main reasons why many people regard it as one of the most underrated hybrids of all time.

The legacy of Skunk No. 1 and Super Skunk lives on through Sour Diesel and Sour Urkle. Its smoke is a blend of berry mixing with a skunky flavor and a sweet hint. During exhalation, it leaves a sour diesel aftertaste.

Using Sour Urkle leads to the mouth and the eyes feeling dry. It may also cause some people to feel dizzy. In most cases, these symptoms are mild and not a concern at all.

Do note that it is also capable of causing a few users to feel anxious. It also has the potential to leaves one feeling paranoid. Individuals who are susceptible to such conditions should avoid using Sour Urkle. And if one were to insist, then be sure to use only a tiny amount.

The ability of Sour Urkle to put one in complete relaxation while keeping the spirit high is incredibly helpful in reducing or eliminating stress and depression. Combine that with its antipsychotic property; then it also makes for a useful aid in battling mental health issues such as PTSD and bipolar disorder.

Possessing a high amount of THC, people use it for a reprieve from chronic pains. It has a decent anti-inflammatory property that helps people deal with body aches including muscle spasms.

Sour Urkle can help people deal with fatigue in two ways. On its onset, it gives people enough energy to stay productive. The physical relaxation that follows then allows users to cooldown and chill.

Sour Urkle grows equally well indoors, outdoors, and in greenhouses. It is a medium size plant, and that makes it convenient to cultivate inside the house too. Topping may be necessary if placed in a tight space. As it grows bushy, regular trimming and pruning of the leaves is a must. Not only does it allow for better light distribution, but it also circulates the air and keep humidity level consistent.

Once mature, its semi-rounded bugs are super dense and comes with a striking olive-green color amidst purple hues. The trick to bringing out this purple undertone is to place the plants at a colder temperature (10 degrees lower than ambient) before flowering.

It has a pungent odor that, if not controlled, can fill the house. Over time, it can become overbearing. A solution to that is to use carbon-activated charcoal odor control filter.

The flowering period of Sour Urkle last 8 to 9 weeks. After which, growers can harvest 10 to 12 ounces of buds per square meter.

In the northern hemisphere, Sour Urkle transitions to the flowering phase by early October. It is possible to harvest before the month ends with each plant having a yield of at least 12 ounces of buds.

Have you ever smoked or grown your own Sour Urkle? Please let me know what you think about this marijuana strain in the comments below.