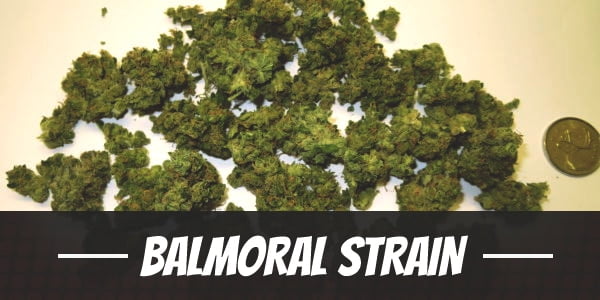 Skunk #1 is arguably the most recognized name in the marijuana industry. In fact, its influence is far more significant than most people know. For example, it has served as a genetic base for numerous other classics such as UK Cheese.

While the name is indicative of its fragrance, UK Cheese is more recognized for its energizing high before putting users into relaxation without the sedation. Tweed, a licensed producer in Canada, must have seen its potential for the medical community. Hence, they set out to develop a refined variety of Skunk #1.

They called this new hybrid Blue Balmoral. Although some people would like to think of it as a variety of UK Cheese, it is, in fact, a completely new strain – one that significantly provides more medical benefits.

Balmoral is an evenly balanced hybrid with an above average potency. Like Skunk #1 and UK Cheese, the onset begins with a euphoric head high, although it is not as intense. People who are more tolerant of THC, for instance, may describe its effects as mild. Nonetheless, this strain can for sure uplift the spirit. As if freed of burden, the cerebral high of this strain can take on a dreamy quality.

We don’t currently sell the Balmoral seeds. Check out other Hybrid seeds in our marijuana seed bank.

From an upbeat mood, gradually, laziness sets in as the Indica traits of Balmoral takes over. As the numbing buzz spreads to the extremities, users soon find themselves feeling lethargic. After taking people on a stimulating journey, the strain settles users into deep relaxation.

Although developed for medical use, some people may use it for recreational purposes. Use a little too much, and its sedating high may lock one on a couch with a foggy mind.

Blue cheese is weird in the sense that its scent is both unappealing and enticing at the same time. Not to mention, it is yummy. Such trait is what made UK Cheese incredibly popular around the world. So, imagine that same fragrance carrying over to Balmoral and throw in a mild skunky odor, that is how it smells. And, it is quite pungent too.

Balmoral, with its creamy taste of blue cheese, is a delight to the palate. During exhale, it leaves a spicy and sweet aftertaste.

For most people, the only adverse reactions with the use of Balmoral is experiencing dry mouth and eyes. Such conditions are nothing out of the ordinary, of course.

Although there are no reports as of yet, there is also a likelihood that some people may feel dizzy. Usually, this happens to first-timers or those who do use up too much. And, in that case, it is also possible that some may feel a bit anxious.

We don’t currently sell the Balmoral seeds. Check out other Hybrid seeds in our marijuana seed bank.

Balmoral is best used to combat stress. Not only that, the same euphoric buzz that sets the tone for an uplifting high can help people deal with depression. To a certain degree, its CBD compound also plays a role.

Other then the benefits to mental health, Balmoral also has analgesic and anti-inflammatory properties. Hence, some people use it to reduce or wipe out pains and aches. It may not work as well as other high CBD medical strains, but it can assuredly work in mild cases.

Tweed has not released any info on the genetics of Balmoral, let alone its seeds. Hence, home growers can forget cultivating this at home. Even obtaining a cut is an impossibility as it is a proprietary product of the licensed producer.

Any information on growing, therefore, is an estimation and should be taken with a grain of salt.

From its supposed genetics, it is safe to assume that the plant can survive in both indoor and outdoor environment. Tweed, of course, produces this plant in a greenhouse facility.

Balmoral, developed for commercial purposes, will probably do well using hydroponics. At the same time, it should be adaptable to different training methods. And, a reasonable assumption is that it should also not only be a resilient plant but one that is resistant to pests and diseases.

Balmoral should not stray too far from Skunk in that its flowering period should last from 8 to 9 weeks. As for its yield, the rough estimate is around 12 ounces per square meter.

Harvest time in the northern hemisphere should fall in October. During this time, each plant should produce up to 12 ounces of buds.

What is the Balmoral strain yield?

How much THC does Balmoral have?

What are the origins of the Balmoral strain?

Have you ever smoked or grown your own Balmoral? Please let me know what you think about this marijuana strain in the comments below.