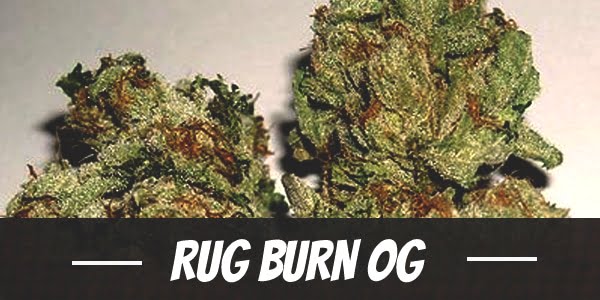 Healthy competition has been around since the inception of the market. It is a practice that drives companies of all industries to create innovative products. In the same way, breeders in the cannabis industry can get quite competitive when it comes to creating potent varieties of marijuana.

Driven to give users the bed bud possible, Rare Dankness Seeds genetically engineered Rug Burn OG using Rare Darkness #1 and Ghost OG. Both of which are widely acclaimed strains for their effects and exceptional growth performance.

Rare Darkness #1 is a staple in the breeding room of cannabis cultivators. On the other hand, Ghost OG is a strong Indica descended from the original ocean grown strain. These two gained reputations for having trichome frosted buds and heavy resin production – traits that are very much evident in Rug Burn OG.

Rug Burn OG placed 3rd in 2012 Cannabis Cup hosted by High Times. Two years after, the overachiever earned itself a spot in the “Earth’s Strongest Strains” list for its wicked amount of THC.

There are only a handful of strains that have been dubbed as the earth’s strongest strains. And, rightly so, Rug Burn OG claimed a spot in that highly coveted list with an otherworldly 28% THC. As such, it might be too overwhelming for some users especially beginners.

Though Rug Burn OG may be an Indica leaning strain, its onset is marked by a euphoric headrush. The upliftment it provides does not only promotes happiness but also an upbeat mood.

Beginning from the temples, a tingling sensation gradually envelops the body. Its devastating effects not only soothes the muscles but also leaves most users locked on the couch while basking in pure relaxation.

As stated earlier, Rug Burn OG is a very potent hybrid. Even seasoned stoners may get knocked out while consuming the strain. For that reason, first-timers in using marijuana may want to consider using another strain.

Rug Burn OG smells like a basket of freshly picked grapefruits. Underneath the sweet citrus, there is an earthy pine scent. When crushed, it releases a pungent diesel aroma. Though diverse, its fragrances are captivatingly well blended.

Rug Burn OG is renowned for its citrusy and sweet flavors. While initially fruity, the aftertaste of the strain has a spicy herbal quality. During the exhale, undertones of diesel are evident.

Marijuana use always causes cottonmouth and dry eyes to some degree. And, using this strain is no exception. There are also chances of people experiencing some slight dizziness. But, these are often mild, barely noticeable, and easily mitigated.

However, when toked too much, Rug Burn OG can cause a little bit of anxiety. And, that is why it is always best to indulge in moderation.

Rug Burn OG excels at alleviating many medical conditions. The uplifting and euphoric onset of the high busts out stress. Leaving users in a blissful state, it often comforts those struggling with depression and PTSD.

An excellent analgesic, Rug Burn OG not only alleviates different kinds of aches and pains. Soothing muscles, it cradles users to sleep underneath a blanket of relaxation. These same psychoactive compounds also stimulate the appetite.

Because of its excellent genes, Rug Burn OG is resistant to molds and mildew. Not only that, its Indica heritage assures growers a vigorous amount of buds. An incredibly easy grow, the strain can be classified as beginner friendly and suited for aspiring home growers.

In appearance, Rug Burn OG’s buds are mint green masked behind a rich layer of crystal trichomes and orange pistil hairs. They can also get quite fluffy, which growers may want to double check for any unwanted leaves.

Rug Burn OG is a short plant with densely compact leaves that does not need to be topped early. As such, growers can maximize the total amount of space in the grow room and add more strains. However, it releases a strong scent. So those who would like to preserve their privacy may opt to install anti-odor filters together with their exhaust systems.

With proper care, Rug Burn OG will finish flowering in 7 to 9 weeks. Once ready, growers can harvest up to 8 ounces per square meter.

So long as climates are warm and temperate, Rug Burn OG will require only basic maintenance. While the hybrid may be resistant to mold and mildew, it might not do as well with pests. In which case, growers should remain vigilant.

Without problems, Rug Burn OG should flower by the second or third week of October and produce at least 8 ounces per plant.

Have you ever smoked or grown your own Rug Burn OG? Please let me know what you think about this marijuana strain in the comments below.