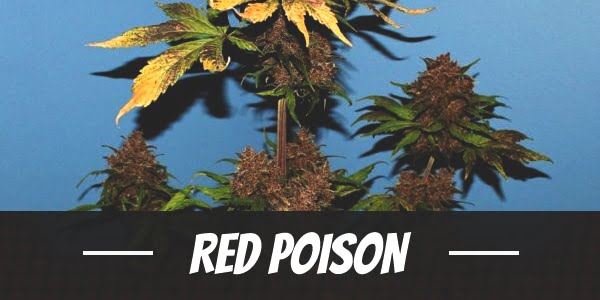 In truth, this strain is the farthest thing from real poison. Understandably though, the crimson red colors of the buds may have inspired its name. Apart from appearance, Green Poison from the same breeder also exerts a significant influence.

A heavy-hitting Indica, Green Poison from Sweet Seeds can quickly kill stress and muscle pains. To create a new hybrid, the breeder used a descendant of a native Hindu Kush auto. Not only did it pass on its rich trichome production, but this pure Indica also injected its auto-flowering genes.

After stabilizing the new hybrid, the result is nothing but spectacular. Red Poison, in many ways, is an upgraded version of Green Poison. Boasting of purple hues, it is also a sturdy and more resilient plant than its predecessor.

From its reinvigorating mental high to its relaxing body buzz, Red Poison has something for all kinds of users – both recreational and most especially medical.

Test data shows Red Poison packs anywhere from 15% to 19% THC. In other words, it can induce an above average to incredibly potent psychedelic effects.

In normal use, the onset begins with a euphoric head high. Mental clarity and heightened sensitivity also follow the energizing rush. Feeling upbeat and energetic, users often are enthusiastic about not only being productive but also highly sociable. In fact, some people may end up being a little too chatty.

The cerebral effects may be pronounced but not at all too intense. Before it could further intensify, the Indica properties of the strain start to work its way to the body. It complements the mental high by uplifting the mood to new heights. Gradually, though, a deep sense of relaxation sets in causing most to feel lazy.

Used to the limit or exceeding one’s tolerance, Red Poison can induce extreme psychedelic highs. Instead of having a dreamy feel, it may cause visual distortions. After putting users on a couch-lock, these users are likely to prefer swaying gently with the ebbing relaxing sensation even as the mind may be a bit foggy.

Red Poison can be very pungent at times. But, it may also be sweet and fruity in other instances. Once its nugs are grinded into bits and pieces, an earthy spiciness becomes completely apparent. There may also be hints of skunk as the buds are toked.

Tropical flavors define the Red Poison. It is sweet like ripened fruit but also tangy like citrus. This exotic strain also has a distinguishable earthy undertone. Upon toking the hybrid, it releases a very smooth smoke on the throat.

The side effects of Red Poison are mild, resulting mostly in dry eyes and dry mouth. Often, people turn a blind eye toward them because they are unnoticeable. At times, however, it may result in a minor headache or some slight dizziness. But, none of these are alarming as these are typical of marijuana use.

Like many other marijuana strains, the CBD content of Red Poison is not that high. However, its psychoactive properties provide a balanced high that makes it great for easing a plethora o conditions.

As alluded to earlier, Red Poison induces a euphoric high. Its ability to boost low moods make it a great stress-reliever. Uplifting spirits, it can aid in easing symptoms of some mental health issues to a certain degree. Because of this, it can be quite an effective anti-depressant.
An Indica leaning herb, Red Poison has muscle soothing and pain-relieving effects on the body. Thus, it can eliminate physiological discomforts like chronic pain, headaches, cramps, muscle strains, and spasms.

The same compounds responsible for its analgesic properties also have a hand in stimulating the appetite. After toking, users may feel a strong urge to eat and replenish.

Thanks to its auto-flowering genes, Red Poison is easy to grow. Genetically engineered to flower automatically, it does not require excessive attention from growers. It will grow any time of the year so as long as it matures in time to avoid frost.

To induce the appearance of purple hues, growers will have to expose it to a colder temperature (10 degrees Celsius lower than ambient) before the flowering phase begins.

Red Poison is a short plant that does not exceed 120cm and may not even need topping. Eight weeks after the seeds sprout, it is possible for cultivators to harvest up to 19 ounces of buds per square meter.

Red Poison thrives best when it is exposed to hot and humid climates. Just like cultivating it indoors, it takes only eight weeks from germination to harvest. However, its yield is lower at some 2 to 6 ounces per plant.

Have you ever smoked or grown your own Red Poison? Please let me know what you think about this marijuana strain in the comments below.