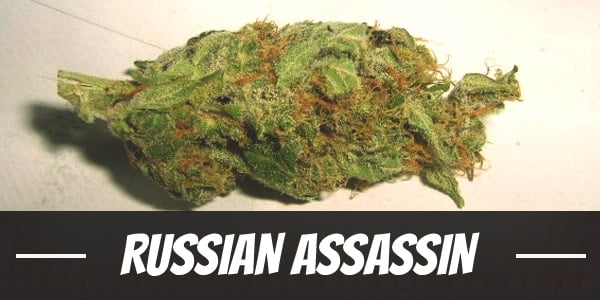 Despite its name, Russian Assassin is not a real killer or murderer. Instead of harming people, this Indica-dominant marijuana strain gives users a one-of-a-kind high that leaves many craving for more.

While most hybrids are a cross between two strains, this one is the result of three. Russian Assassin, carrying the genes of these remarkable plants, are marked by either stunning effects, massive yields or attractive looks.

From Skywalker, Russian Assassin inherited its unforgettable head high. Headband, so called for the pressure it induces on the forehead and between the eyes is a voracious producer. And, on its appearance, the influence of Lemon OG Kush is not only evident but proudly displayed.

These three are highly acclaimed in the marijuana market. As such, there is much to expect much from Russian Assassin. Whether it is a staple smoke in every cannabis connoisseur’s dispensary is subject to individual preference. But, suffice to say, the psychedelic high this weed induces is intense.

Russian Assassin is an insanely potent strain. With up to 23% THC, its psychedelic high is intense. It does not take long after using for users to feel the euphoric cerebral rush. Apart from uplifting the mood, its effects continue to turn one into a cheerful social butterfly.

Later on, the full Indica traits of Russian Assassin become more pronounced. Starting off with a prickly sensation engulfing the body, a mild body buzz ensues. Gentle at first, it quickly intensifies into a deep relaxation. But, this only serves to complement the experience even as it leaves users spacey and couch-locked.

As the high wears off, drowsiness sets in. Once users doze off, the slumber will go on for hours on end. Thus, those looking to rest may want to take advantage of the strain’s backend effects.

Russian Assassin has a very pungent minty fragrance. This coolness is accented by a citrusy aroma, which can be too sharp for those with sensitive noses. Some have even deemed the smell unlikable. But, of course, everyone has their preferences.

Once the buds are grinded, they emit a spicy and earthy odor. There are also detectable notes of pine with further inspection.

At the first toke, users detect a distinct floral taste. Evident in its profile is a cooling mint flavor that complements the taste of earth. Upon exhale, a skunky but diesel-like aftertaste is apparent.

Russian Assassin’s smoke is mild and not harsh on the throat. While it may cause some users to cough, a hint of spiciness felt in the throat will compensate.

All strains have varying side effects to some degree. The use of Russian Assassin is no different. A case of the cottonmouth is the most common reaction to marijuana use. Some people may experience, to some degree, dry eyes. There is also a slight chance that slight dizziness may occur.

Although, Russian Assassin may cause slight paranoia and anxiety. However, this only happens if too much of the herb is smoked. Pacing and moderation is a must, especially for novice users.

Although it has a low CBD content, Russian Assassin can alleviate a wide array of mental and physical conditions. For example, its happiness inducing high is of great benefit to people with depression or PTSD.

But, as a hybrid with an amazing Indica heritage and a calming cerebral high, its best use is for relieving chronic pain. An excellent analgesic, it can treat many kinds of pains and aches like muscle tension, fatigue, and stomachaches.

Because Russian Assassin is fairly new to the cannabis market, there is little info on its growth patterns. But, judging from its ancestry, it is sure to be a sturdy strain. Although, there is no guarantee what methods work best for it. For this reason, it is best to leave it to experienced growers who can track its growth.

Soul Assassin OG is a strain that is not to be underestimated. Insanely potent, its THC content can go up to 20%.  Read our review!

Russian Assassin has a flowering period of 7 to 9 weeks. With proper care, it will surely produce decent yields ranging from 10 to 12 ounces per square meter. An option to install odor-control filters is available for those with privacy issues.

Flourishing best in sunlit, warm areas, Russian Assassin will flower by late September so long as it is given proper care and attention. Up to 12 ounces per plant awaits growers who are patient until harvest time.

Have you ever smoked or grown your own Russian Assassin? Please let me know what you think about this marijuana strain in the comments below.