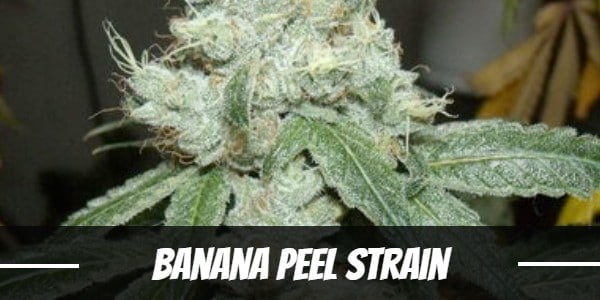 Banana peels have a multitude of benefits. Among which is its ability to reduce pain. In a similar manner, a cannabis strain of the same name also has similar soothing physical effects. Not only that, it has the undeniable scent of real bananas.

The perfectly split hybrid was developed by renowned breeders Illuminati Seeds using a special cut of Banana OG. Laffy Taffy, as it is named, is a Sativa with uplifting effects on the brain and is highly energizing to the body. It was later paired with Pestilence which, in spite of its name, brings only good deeds. From it, Banana Peel gained a sturdier structure, better resin production, and immense potency.

Apart from its pharmacological value, Banana Peel is also great for recreational use. It delivers a well-balanced high that brings users to new heights with its sweet smoke.

With THC levels ranging from 15% to 20%, Banana Peel is no doubt a potent strain. It is hits users fast with a cerebral onset manifesting almost immediately after the first two or three puffs. As the subtle rush of euphoria spreads across the mind, it lifts spirits and leaves users feeling happier from within.

At this point, it is not uncommon for users to idly pass the time as profound thoughts enter one’s consciousness. But, for those with work ahead of them, the free flow of ideas is a great opportunity to get creative.

As the hours pass by, a warm but fuzzy sensation ebbs down from the temple ebbs down to the rest of the body. It soothes the muscles and envelops the body in an uplifting buzz. Most likely, users will lounge on their couches feeling light as air. Those who toke too much of the strain even fall asleep as a wave after wave of relaxation comes.

In spite of this, the strain may be used in the mornings and afternoons. Provided it is used in moderation, of course.

Banana Peel carries a fragrant aroma that immediately reminds anyone of bananas. An unexpected diesel undertone accompanies the sweetness. Once broken apart or combusted, it releases a distinct tree fruit smell.

Banana Peel’s flavor is almost identical to its smell. Drawn in, it floods the palate with the delectable taste of green bananas with a tinge of taffy. Its initial sweetness later gives way to a more pronounced diesel aftertaste.

It is always advisable to have a few drinks on hand or nearby while smoking marijuana. After all, users do feel dehydrated due to moisture-inhibiting cannabinoids interfering with the production of saliva. Some may also experience dry eyes to some degree. In such cases, the best drink to have is water since alcohol and coffee do not pair are likely to worsen the psychedelic effects.

Though rare, it is possible for one to feel a little greened out when too much of Banana Peel is consumed. ‘Greening out’ is a condition characterized by dizziness and anxiety. At times, some may also experience paranoia. For this reason, the bud must always be used with caution.

Chronic pain is a condition that many people all over the world suffer from. Although its severity differs, it can sometimes diminish the overall quality of life. As such, it is important to alleviate some of the discomfort. To this end, Banana Peel works perfectly.

Looking to buy seeds like Banana Peel? Check out our marijuana seed bank.

In inducing a soothing body high, Banana Peel keeps muscles from contracting and sending pain signals to the brain. It gets rid of aches beginning from the temples in the same manner. Free from tension, users feel slowly reinvigorated against the tiredness caused by physical fatigue.

Banana Peel’s effects also benefit the mind. For one, its uplifting onset effectively reduces stress and positively affects behaviors. By doing so, it provides a temporary reprieve against depression and other similar mental health issues.

There are many advantages to growing a perfectly split hybrid like Banana Peel. Its Indica genes influenced its relatively sturdy stalks that branch out beautifully and produce multiple budding sites. Not only that, it is yields vigorously just like a Sativa. Sadly, this does not guarantee an easy grow.

This is not to say the plant will not thrive well outdoors. On the contrary, its buds are larger and even tastier. However, it is exposed to unpredictable weather, lack of sunlight, strong winds, and, quite possibly, pests. For this reason, many growers prefer cultivating their strain in less volatile environments like greenhouses or grow tents.

Indoors, growers can easily adjust factors like lighting, temperature, and humidity which are crucial to Banana Peel’s development. It is necessary to apply height management techniques like early topping to keep the plant short. Otherwise, it can grow up to 7 feet and cramp up the space. Ventilation is another important element to consider as the bud releases a pungent scent during flowering.

Adding to Banana Peel’s appeal is that it comes in feminized form. This not only shorten the growing process, it also makes the herb easier to cultivate. Moreover, growers are assured of a full female-batch with resin-filled calyxes.

Banana Peel is not for the inpatient cultivator. Its flowering period takes as long as 10 weeks. However, the plant rewards growers with a hefty yield usually ranging between 12 to 14 ounces of buds per square meter on average.

Outdoor cultivators usually see the first flowers bloom around the second or third week of October. Once mature, growers harvest at least 14 ounces worth of buds per plant.

What is the Banana Peel strain yield?

How much THC does Banana Peel have?

What are the origins of the Banana Peel strain?

Banana Peel was created from a mix between Banana OG (Laffy Taffy cut) and Pestilence.

Have you ever smoked or grown your own Banana Peel? Please let me know what you think about this marijuana strain in the comments below.