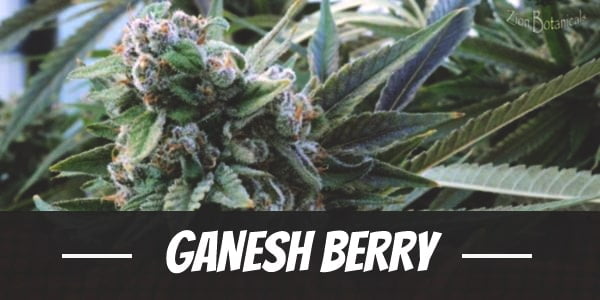 In Hinduism, Ganesh is the patron deity of businessmen. It is believed he removes obstacles so beginnings go smoothly. However, the elephant headed god is also the deva of intellect and wisdom for his ability to clear the mind of hindrances.

Similarly, a cannabis strain named ‘Ganesh Berry’ offers the same mental clarity albeit a little less divine. Its potent THC levels, plus immensely stimulating head high, spark a surge of creativity and intense focus that could last for hours. This is if the well-balanced bud is used moderately, of course. Otherwise, it can be quite devastating.

Creating Ganesh Berry was not at all difficult. Zion Botanicals took an indigenous Indicas from North India and paired it with another landrace, Afghani. The resulting hybrid, which embodied the relaxing properties of its parents, was later crossed with Plushberry for flavor.

Like the other strains from the Zion Botanicals roster, Ganesh Berry has endless medical potential especially against a myriad of afflictions exacerbated by stress.

It is important to pace one’s usage of Ganesh Berry for the first 30 minutes of the session. Otherwise, its slow-starting onset will overwhelm users with a head-slamming high once it begins. Intensifying the debilitating effects is its high THC content of up to 21%.

In moderation, however, the initial cerebral psychedelic high is quite pleasant. A rush of euphoria clears the mind and enhances creativity by allowing thoughts to flow or form freely. Along with the clarity is a heightened sense of focus which allows users to concentrate on tasks throughout the day.

Gradually, the same uplifting buzz responsible for the soaring head high trickles down from the temples. In the rhythmic fashion of waves, it calms each muscle and soothes away tension. The body becomes noticeably heavier as each hour passes until, eventually, users are enveloped in a ball of relaxation.

Because of the well-balanced high it delivers, Ganesh Berry can be used any time of the day. However, those looking to take advantage of its great wake-and-bake qualities should pace consumption. Too much of the potent herb can render one immobile.

Surprisingly, Ganesh Berry has a strong floral overtone at the first whiff. Enhancing it is a subtle note of berry and sweet grapes that only intensify once the buds are broken apart or combusted.

Carrying over to Ganesh Berry’s taste is its fruity flavor, particularly that of berries and grapes. Drawn in, it melds together with a floral undertone and leaves a sweet aftertaste that lingers even after the last hit.

Having a drink nearby is always a wise idea when using Ganesh Berry, or any strain for that matter. This is because moisture-inhibiting cannabinoids of marijuana interfere with the salivary glands and tear ducts. Downing a few glasses of water, however, will immediately relieve the dry spell.

Users also experience a subtle feeling of paranoia, as well as a minor headache, with Ganesh Berry. Some also A major factor in this side effect is smoking beyond one’s tolerance. As such, it is best to use the bud with caution.

More than a third of enthusiasts from the United States cite stress relief as the main reason for using marijuana. To this end, Ganesh Berry works effectively. The combined effects of its THC, CBD, and other cannabinoids like terpenes provide a reprieve against certain health conditions exacerbated by stress.

Its happy high, for example, helps users manage symptoms of depression and other mental health issues such as PTSD. It does so by enhancing the mood, stabilizing turbulent emotions, and getting rid of overwhelming dread.

Stress can also come in the form of headaches, exhaustion, and body pains. Through its soothing body buzz, Ganesh Berry relieves the physical manifestations of constant pressure.

Ganesh Berry inherits a sturdy structure from its pure Indica lineage. Both its thick stalks and branches are highly resistant against strong gusts of wind. Not only that, the strain can withstand problems caused by high levels of moisture in the air such as mold and mildew. Thus, its excellent outdoor performance should come as no surprise.

The well-balanced hybrid performs well indoors too, especially when cultivated using the Screen of Green method. Using hydroponics will encourage the plant to yield faster but soil undoubtedly brings out the best flavors.

Because of its impressive growth profile, Ganesh Berry is among the top beginner strains to cultivate. It is also perfect for looking to enhance one’s experience of smoking marijuana through growing.

Ganesh Berry has an indoor flowering period of 8 to 10 weeks. Once mature, growers harvest between 12 to 14 ounces of cured buds per square meter.

In the northern hemisphere, Ganesh Berry blossoms between the second to the last week of October. Once ready for harvest, it yields at least 14 ounces of buds per plant.

Have you ever smoked or grown your own Ganesh Berry? Please let me know what you think about this marijuana strain in the comments below.