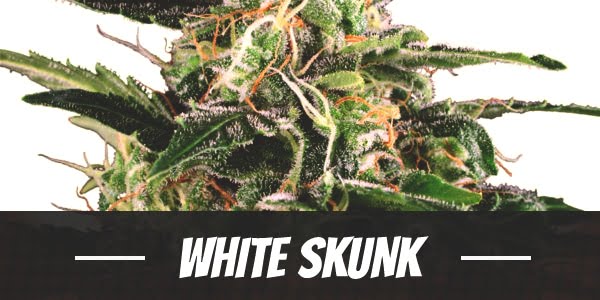 White Skunk is among the most flexible strains from the White Label Seed Company.

It is potent and hard-hitting but its high is buildable.

Though generally categorized as a thrill seeker’s dream, inexperience users may still enjoy the Indica-dominant herb under the supervision of a seasoned friend.

With their expertise, it is just as enjoyable and not at all overwhelming.

What truly sets it apart though is its performance in the grow room.

Taking advantage of its versatility, White Label has developed seeds of almost every kind to cater to the demanding needs of a plethora of growers.

Even aspiring green thumbs can grow the sturdy, quick-flowering, and high-yielding White Skunk.

This makes White Skunk a top choice among hobbyists and commercial producers alike.

Although, nothing less can be expected of the Skunk No. 1 variant. After all, the latter is a resilient hybrid.

White Skunk is an enjoyable hybrid that perfectly blends together its Indica and Sativa counterparts. Though it leans toward the former, its initial onset is remarkably cerebral. Its rush of euphoria leaves users radiating with a happiness that can only come from within. In clearing the mind, it also inspires a surge of creativity that turns thoughts into innovative ideas.

After about an hour or two, its pronounced physical effects begin to manifest. From the temples is a light pressure that ebbs down smoothly to the rest of the body. As it spreads, it relaxes the muscles and unties any knots. The relaxing buzz intensifies with each puff until users find themselves locked to their couches. A heaviness plants itself in the limbs that make opening the eyes difficult and eventually many drowsy enthusiasts drift off to dreamland.

With THC levels starting at 15%, White Skunk is definitely not a strain to be toyed with. The powerful Indica-dominant bud can leave users devastated with its heavy-hitting high when used all at once. Alternatively, it can hamper productivity when improperly used during the daytime which makes it better suited for evening. Using the herb with caution, however, will keep such effects at bay.

White Skunk is a pungent bud with strong overtones of skunk. Enhancing it are sour undertones of citrus reminiscent of lemons and oranges. Broken apart or combusted, it releases a sweet aroma that fills the room despite its subtlety.

White Skunk bursts in the palate with a pleasant citrus similar to a lemon-orange juice. Though sour, it is accentuated by a sweet skunk that lingers even after the last hit.

It is best to have a beverage in hand while using White Skunk or any other strain for that matter. After all, dehydration is a common side effect of marijuana. It usually reflects in the eyes and a cottonmouth especially as moisture-inhibiting cannabinoids begin to interfere with the production of saliva. Drinking a few glasses of water before, during, and after a session. Avoiding alcohol and caffeine, however, will exacerbate the problem.

Depending on how much is used, White Skunk can also induce a temporary headache or mild dizziness along with a subtle feeling of paranoia. Thankfully, this is rare and is easily avoidable through pacing and moderation.

It is not wrong to assume that White Skunk was created with a recreational use in mind. Still, its use carries with it a myriad of therapeutic benefits thanks to the combined efforts of its THC, CBD, and other cannabinoids. For example, its euphoric happy high eases stress by ridding the mind of overwhelming dread or anxiety. In effect, it helps users temporarily manage mental health issues like depression and PTSD.

As a potent Indica-leaning strain, one of White Skunk’s best features is its soothing body high. It appeases physical pain by releasing tension from the muscles. At the same time, its antiemetic properties relax the stomach and keep users from feeling nauseous.

Sleep is an important regenerative component in the healing process. A lack of it or a decrease in its quality can worsen health conditions or accelerate its early onset. But, by sedating both the body and the mind, White Skunk provides users with a night of well-deserved rest.

White Skunk is a beginner-friendly strain. It is sturdy with a high resistance against common problems like mold, mildew, fungus, and even pests. And, though it prefers the long summers of the Mediterranean, it has no issues adjusting to colder temperatures of northern latitudes.

A relatively short plant, White Skunk rarely requires height management. However, it may need to be pruned every now and then so light can spread evenly. Indoor growers may want to apply the Sea of Green method to build more side branches and budding sites. Once mature, it produces dense buds that are sometimes puffy because of its Sativa influence which is also reflected in how they taper on one end.

Adding to its appeal is its availability in all types of seed form – regular, feminized, and autoflower. The first is a little finicky to grow because it requires pre-germination techniques like soaking and Low-Stress Training to ensure a full female batch. The last two shorten the growing process by ensuring growers of calyx-filled plants.

White Skunk has an indoor flowering period of 7 to 9 weeks. Once mature, it produces between 14 to 16 ounces of buds per square meter. Under the expert care of a seasoned grower, it yields higher and may even blossom faster.

As alluded to earlier, White Skunk is a sturdy strain that blossoms early in spite of the cold temperatures of the northern hemisphere usually around late September to middle of October. It yields 18 to 28 ounces of buds per plant.

Have you ever smoked or grown your own White Skunk? Please let me know what you think about this marijuana strain in the comments below.