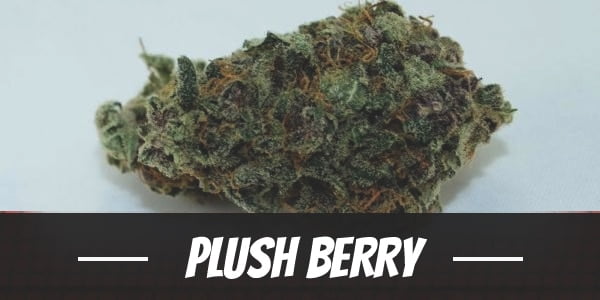 Born of popular strains, the Black Cherry Soda and Space Queen, a lot is expected of the Plushberry. Created and designed by TGA Subcool to be a balanced hybrid, it brings the best of both Sativa and Indica without crashing you.

However, there are a couple of phenotypes, with the main difference in the intensity of flavors and potency. Nevertheless, this relatively new cannabis strain in the market is finding its own fans. This is one strain that is good for use during the day and night.

Plushberry (also known as Plush Berry) was bred by TGA Subcool by crossing Black Cherry Soda and Space Queen, both of which have made a name for themselves in the cannabis scene.

There are two phenotypes of the Plushberry. The first one is shorter than the other, and despite having a low yield, it does come with a much better flavor and more potency. The other phenotype is not only larger, but also bushier. However, it has a lesser potency and not as flavorful as the first phenotype.

Although some batches might be a lean towards Sativa, and others towards Indica, the Plushberry was created to be a balanced hybrid. For recreational use, this is a nice and easy strain to use as it gives you a cerebral high that does not freeze you or lock you on the couch. Because it is balanced in nature, expect the Indica side to work its way towards to body.

As the mental high settles down a bit and the strain hits your body, you feel more relaxed, and generally feel uplifted, happier, and for some, hornier. Some consumers report that they tend to be more aroused after using Plushberry.

As its effects subside a couple of hours or so later, it may also leave you feeling tired. This is a great strain to use on a lazy day where you could take a nap, or in the evening to help you fall asleep and get the much-needed quality sleep.

Plushberry is not one of those cannabis that comes with a powerful odor. In fact, its fragrance may be underwhelming in the sense that until you break the nug, it does not smell much. But once you do, it has a sweet and earthy smell with a fruity note of citrus. For some consumers, the lack of smell makes it appealing as bringing it out does not catch the attention of nearby people.

As for how it tastes, Plushberry is either flavorful or not, and this is depending on which phenotype you are using. You can read more about the two phenotypes under Origin. Plushberry has a sweet and fruity taste with notes of citrus with a little spicy aftertaste.

Primarily, consumers are expected to experience dry mouth. Other than that, there is not much of other concerns except in cases when overusing. As a habit, you should always smoke within your limits. Novice and first-time users should always smoke conservatively.

A little too much may lead to dizziness or a headache. Because of the rushing head high at the onset, some new users may be caught by surprise and experience a moment of panic.

Once the effects kick in for both the mental and physical side, having a better and happier mood combined with the sedative qualities of its Indica side helps medical cannabis users deal with mental health issues. Plushberry is one strain that may be useful for conditions such as anxiety disorders including PTSD, ADD, ADHD.

It may also benefit others in the management of mild chronic aches and pains, and even controlling the blood pressure. Aside from that, it also has a benefit to those suffering from insomnia as it induces drowsiness as its effects wear off. For many users, Plushberry may also induce a better appetite.

Plushberry can be grown outdoor and indoor, including a greenhouse and has a flowering period that begins at around the 8th to the 9th week. It appears that this strain could be grown using hydroponics, but it thrives better using soil as its growing medium. The original breeder, TGA Subcool, recommends topping this plant for it to branch out more and become bushier.

In an indoor setting, the plant grows up to 4 feet tall. It means that this strain is far more convenient than compared to the taller ones, which requires a larger indoor space. It requires more care than other strains. The flowering period is between 55 to 65 days and by harvest, it gives you a yield of 3 to 7 ounces per square meter. If it’s not for its great aroma and taste, consumers are turned off by the low yield.

We know that the Plushberry is not the easiest plant to grow and that by the time you harvest it at the end of the 9th week, it gives a low yield of at least 7 ounces or more per plant. Other than that, there is not a lot of information on growing this strain out in the open.

Have you ever smoked or grown your own Plush Berry? Please let me know what you think about this marijuana strain in the comments below.