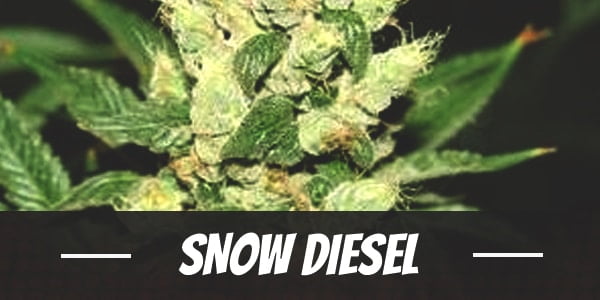 Versatility is Snow Diesel’s forte. Ranging from 19% to 23%, its high is undeniably buildable and can be enjoyed by everyone regardless of experience. Meanwhile, its level-headed effects allow users to enjoy it at whatever time of the day. As a plant, slightly Indica dominant genes provide it with a hardy structure, as well as a manageable height, without sacrificing yields and potency.

Creating such a magnificent strain was not a difficult task. With a wide catalogue of premium strains, it did not take long for House of Funk Genetics to pick East Coast Sour Diesel as a genetic base. The Sativa-leaning strain entices users with its sharp, chemical scent and its great daytime potential. Snow Lotus was later added for its equally potent psychoactive compounds along with its heavy resin production.

While Snow Diesel has the capacity to induce an unforgettable recreational high, it also has important therapeutic benefits. Through the combined efforts of its THC, CBD, and cannabinoids like terpenes, it provides a reprieve against a myriad of physical and mental afflictions.

Being a hybrid, Snow Diesel provides users with a full spectrum of effects. During the initial onset, it first delivers a cerebral high marked by the uplifting rush of euphoria. Though intense, it is not at all overwhelming. Instead, it leaves users steadily floating on a cloud of happiness.

The mental stimulation, however, can be quite draining. As such, it is not uncommon to see some users craving for their favorite grub or grabbing the nearest snack. For convenience’s sake, it is best to have prepare snacks ahead of time and place them somewhere within arm’s length.

Once users happily soar to new heights, Snow Diesel induces a soothing buzz that completely relaxes the body. It eases away tightness, or perhaps, tension in the muscles. In its place is a noticeable heaviness that is not at all sedating. Although, in large amounts, it has the potential to lock users in place or glues them to their couches.

A potent strain, it is not surprising that Snow Diesel is more pungent than the average hybrid. A single bud emits a strong diesel-like aroma that is enough to fill the room. Thus, most users prefer keeping it inside airtight containers. Of course, this depends on the phenotype but, overall, there is an equally striking undertone of wet soil and sweet fruits.

Carrying over to Snow Diesel’s flavor is its diesel overtones. Only this time, it is overshadowed by the flavor of fruit-flavored candy. On the exhale, a sweetness lingers in the palate even after the last toke.

Dehydration is a common effect of using marijuana. Its effects are most felt in the mouth and the eyes, especially as certain cannabinoids interfere with the tear ducts’ production of moisture. Because of its mildness, users often ignore its symptoms as they often go away with time. But, if symptoms do persist, drinking a glass of water should hydrate the body right away.

Some users may also experience temporary dizziness while using Snow Diesel. This is usually a side effect of smoking too much too fast. In which case, the pacing is key.

Depression is a dangerous mental affliction that affects the lives of millions of people all over the world. While its exact cure has not been discovered, cannabis users may still find a temporary reprieve against its symptoms through Snow Diesel.

A natural mood enhancer, Snow Diesel’s happy high stabilizes emotions and calms the mind. In effect, it also eases away headaches regardless of whether its source is psychosomatic or not. After all, the same psychoactive compounds are also responsible for appeasing different kinds of physical pain.

Users with eating disorders also greatly benefit from the bud. Often, food deprived bodies are ridden with stinging pangs of hunger that make even enjoying a meal more difficult. In relaxing the body, Snow Diesel also effectively soothes sudden spasms in the stomach so those with anorexia or cachexia may consume food in peace.

Snow Diesel has a reputation for producing massive yields regardless of its environment. Moreover, it is a breeze to grow. As a hybrid, it brings together the best qualities of its Indica and Sativa genes. Its buds are a great example of this. They are large and, when placed in one’s palm, are heavy due to their density. Moreover, its manageable height makes it ideal for both garden and greenhouse growing. Growers may also opt to shorten the vegetative stage for absolutely limited spaces.

Soil truly brings out Snow Diesel’s full flavor profile. However, it performs well even in growing mediums such as perlite, coco coir, and similar organic mixes. For those looking to produce a ‘clean’ plant, one that is free of chemicals, then hydroponics is the best choice. The latter may require the expertise of a seasoned grower though.

Thankfully, House of Funk genetics has made Snow Diesel publicly available. It comes in regular form, which means growers will have to expect at least half the batch to be males. Besides planting more seeds, applying germination techniques like presoaking as well as Low-Stress Training will increase the chances of producing a resin-filled female.

Unfortunately, Snow Diesel inherited the long flowering period of its Sativa genes. It typically takes between 9 to 11 weeks to blossom, but the wait is well worth it as each square meter yields up to 32 ounces of shimmering buds.

Snow Diesel thrives in warm climates with exceptional air circulation. Growers from the northern hemisphere should begin to see flowers by the middle of October. But, unpredictable factors such as extreme weather or pests may hamper the flowering process and extend it to the first week of November. Regardless, it produces more than 32 ounces of buds per plant.

Have you ever smoked or grown your own Snow Diesel? Please let me know what you think about this marijuana strain in the comments below.