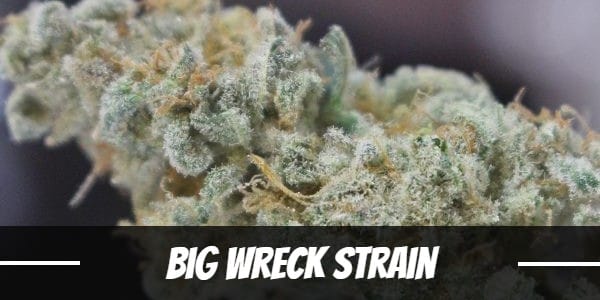 For the non-participants, watching extreme gamers perform their stunts is heart-pounding. As they perform their various tricks, at any given moment, they could end up wrecked. About as close as most of us can get to extreme sports is in the privacy of our homes. All we need is one cannabis strain – the Big Wreck.

So, to all the haters out there, the fact is that the use of cannabis is far safer than doing insane stunts. Of course, that is assuming that we use it within limits. Having said that, we can also have the same level of exhilaration as the Big Wreck delivers its effects.

From its name alone, it already seems notorious. In reality, it is as it has tested to have as high as 27% THC. As such, we can expect an insane high with its use.

Big Wreck took its name from its parents – Big Bud and Trainwreck. Both are popular in the marijuana community as they each bring their own unique traits to the table.

Big Bud came about at a time when the United States was waging war on drugs. Somehow, it found its way to Netherlands and the rest is history. Breeders had used it to cross with other hybrids because of its large buds and massive yields.

Trainwreck, on the other hand, is a mind-bending Sativa-dominant strain. Aptly named, its onslaught hits hard and fast like a runaway train.

By using these two hybrids, some of their best traits were passed on to the Big Wreck.

Big Wreck has a more dominant Indica side. But in most hybrids, even with a smaller side, the mental high is more pronounced at the onset. Contrary to that, this strain creeps into the body first. As users feel relaxed, it then creeps up to induce an uplifting and euphoric mental high.

Used in moderation, most users would feel their head clearing and start to feel vigorous and happy. But because of its potency, it is also likely to cause some people to feel lazy. .But if users can handle it, then that also makes it ideal for use during the day. Otherwise, it is best used at the end of the day.

Big Wreck strain has a classic earthy odor that has a sweet note. It is also very pungent with an underlying floral scent.

One of the parents of Big Bud is Skunk No. 1. As such, not only did it inherit the skunky flavor, it also passed it on to Big Wreck. Some of its scent carries over to its taste with a mixture that is reminiscent of herbs.

It is likely that some people using the Big Wreck strain may experience dry eyes and mouth. Both are common among the use of cannabis, so there is no surprise here.

But there are a few other negative reactions that we want to watch out for. One is feeling dizzy or having a headache. Another is feeling more paranoid. The latter is one reason why people having anxiety issues should not use Big Wreck.

Big Wreck works fast in inducing body relaxation. Once it works its way to the head, the happiness it causes becomes a weapon against stress and depression. Hitting hard like an out-of-control train, it eliminates worries from the mind.

It’s powerful sedative-like traits also comes with good analgesic properties. For this reason, medical cannabis users may want to use Big Wreck for pain relief and dealing with muscle spasms.

In a few instances, the mental high is accompanied by a temporary boost in energy. Depending on how one uses it, the strain can be used to deal with fatigue.

The deep relaxation induced by the hard-hitting Indica properties can also cause people to feel sleepy. As such, it should be of significant benefits to insomniacs.

Big Wreck grows well outdoor and indoor. Growing it is the easier part, but getting seeds is the problem. Because it is not available in seed form, growers will have to get clippings to clone it.

Outdoor, the plant could use plenty of sunlight. It can also grow up to 5 feet tall with the open space. But indoor, growers must prune the plant to keep it short early on during the vegetative stage.

The Big Wreck cannabis plant is ready for flowering in as early as 7 weeks. Once it is ready for harvest, each square meter produces around 12 to 16 ounces of buds.

The ideal growing environment for this marijuana plant is similar to the Mediterranean where it is semi-humid. It can tolerate a slightly cooler temperature too. Big Wreck starts to flower during the last days of September or the first week of October. Once it is ready for harvest, each plant will have a yield of 16 or more ounces.

What is the Big Wreck strain yield?

How much THC does Big Wreck have?

What are the origins of the Big Wreck strain?

Have you ever smoked or grown your own Big Wreck? Please let me know what you think about this marijuana strain in the comments below.