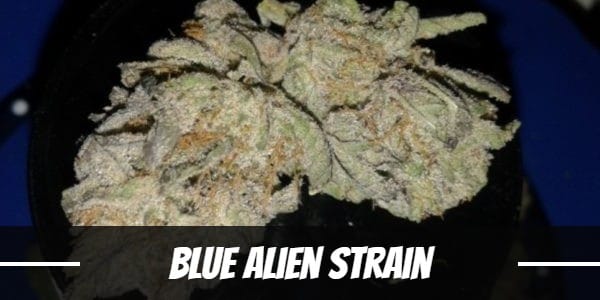 In the cannabis industry, Blue Alien is nothing like the imagined extraterrestrial being that abducts people to space. Instead, it is a pure Indica with equally impressive flavors and effects. In fact, taking a swig of its ‘sweet to taste, saccharine’ smoke seemingly transports one to the tropics.

In many respects, one can say that Blue Alien is an improved version of Blueberry. Apart from its berry-flavored terpenes, it earned its pain-relieving Indica qualities from the premium genes of the latter. The next order of business was to pair it with Alien Kush, an herb that turns its offsprings into beginner-friendly performers in the grow room.

Boasting consistent THC levels of 20% to 21%, it is undeniable that Blue Alien is extremely potent. Nonetheless, novices may still indulge in the bud and its delicious smoke with the help of a seasoned friend.

Unlike Sativas, Indicas have a slow onset. Blue Alien generally takes a bit of time before a soothing calm begins to wash over the body and the mind. But, once it does, a subtle euphoric rush leave users in a dream-like state – where wellness and happiness prevail.

It is not difficult to stay upbeat and cheery. The mind, after all, is adequately stimulated. Although, one will have to prepare snacks ahead of time. The head high can leave one hungry and doing small physical activities may be difficult due to the tingling body sensations.

At this point, the Indica effects have already begun. In waves, a light pressure envelops the body in relaxation. Freed of both mental and physical tension, it is not surprising to see users sink to their couches without worries. As the soothing sensation intensifies, the sedating properties become equally powerful. As drowsiness sets in, users drift to sleep without even realizing it.

Overall, Blue Alien’s body buzz is perfect for capping off the day. Those who overindulge, however, may become the subject of the bud’s overbearing effects. In this case, the numbing body effects can quickly knock one out.

Blue Alien smells astonishingly like candied fruit. It is sweet with citric notes of oranges and lemons. Crushing the buds brings out its blueberry undertones and intensifies the overall aroma.

Carrying over to its flavors is Blue Alien’s candy qualities. In the palate, the taste of glazed berries, grapes, and citrus brings users to an enjoyable summer party. Enhancing the tropical flavors is its earthy aftertaste.

While very tempting, it is better not to overindulge with Blue Alien. Doing so may heighten anxiety levels or cause slight paranoia, especially for first-time users. At any rate, another condition that some users might experience is getting a headache. Cottonmouth and dry eyes, of course, comes with the use of marijuana. Thus, pacing and moderation will keep users from experiencing such symptoms.

Presumably, most people use Blue Alien for recreational purposes. Even so, its pharmacological value can benefit medical users too. Through the combined efforts of its psychoactive compounds, CBD, and cannabinoids, it provides users a reprieve from mental and physical afflictions.

Looking to buy seeds like Blue Alien? Check out our marijuana seed bank.

For one, the mood leveling effects of the bud help users manage mental conditions like depression and PTSD. It also clears the mind and fills it with positivity. In a similar manner, the stimulating effects of Blue Alien wipe out stress.

As an analgesic, Blue Alien can be used to relieve physical aches and pain. Meanwhile, its anti-spasmodic properties calm sudden muscle contractions and the sharp pangs that come with it.

Because Blue Alien is only available in its regular form, some growers prefer to have extra seeds. That is so they could germinate more if it turns out that there were males that need to be discarded.

As alluded to earlier, growing Blue Alien is easy. A typical Indica, its stalks and branches are sturdy and short. It is also tolerant of little mistakes that beginners might make when growing marijuana for the first time. And, due to its bushiness, some of the fan leaves need regular pruning. Once mature, it produces resin-filled calyxes with dense, forest-green nugs covered with sparkling trichomes.

One of Blue Alien’s best features is its quick flowering period, taking only 7 to 9 weeks. Once mature, each square meter produces anywhere between 10 to 12 ounces of buds.

Mid-October is the time that outdoor growers can expect to harvest their crop. Like indoors, Blue Alien gives growers nice yield of 12 ounces per plant.

What is the Blue Alien strain yield?

How much THC does Blue Alien have?

What are the origins of the Blue Alien strain?

Have you ever smoked or grown your own Blue Alien? Please let me know what you think about this marijuana strain in the comments below.