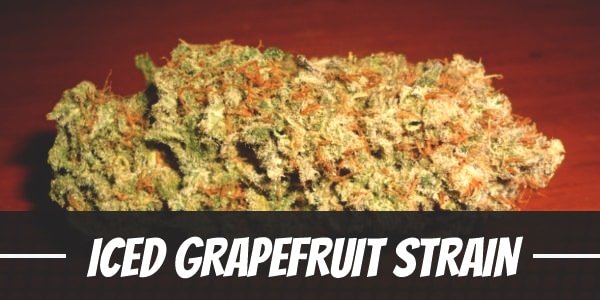 Female Seeds is a pioneer in the field of cannabis industry. The breeders created the first seeds that produced an all-female batch. However, its fame does not only come from its guaranteed great grow. Its ICED Grapefruit, for example, is popular for its delicious smoke and potent THC levels.

In developing the slightly Sativa-dominant hybrid, the breeders chose the well-balanced ICE which yields high and is incredibly frosted. It was later crossed with Grapefruit, a fast-flowering Sativa with an amazing tropical flavored terpene profile.

Apart from its recreational purpose, ICED Grapefruit is also pharmacologically valuable. It induces a relaxing head high, along with a tranquilizing body buzz, which provides patients with a reprieve against certain mental and physical conditions.

It does not take long for ICED Grapefruit’s effects to manifest. Almost immediately after a puff or two, it delivers a rush of euphoria that leaves users feeling elated. Complementing the feeling of happiness and positivity is a bout of giggles.

After an hour or two has passed, an uplifting buzz trickles down from between the temples. It envelops the body in relaxation and removes tension from the muscles. Replacing it is a light feeling that allows users to perform tasks easily.

At 22% to 24% THC, ICED Grapefruit can be classified as a thrill seeker’s strain. Despite this, beginners may enjoy the strain under the supervision of a seasoned friend.

ICED Grapefruit smells like ripened grapefruit. It is sweet with subtle but pleasant notes of citrus. Broken apart or combusted, it releases its strong undertones of hash and grapes.

Carrying over to ICED Grapefruit’s flavor is its overtone of fresh grapefruits. Enhancing it is the fruity undertone of sour citrus, sweet grapes, and ripe bananas. On the exhale, an aftertaste lingers in the mouth.

Dehydration is a guaranteed side effect of using ICED Grapefruit. Its symptoms are mostly limited to a mild case of dry eyes and a cottonmouth. Because it is barely noticeable, many seasoned users often ignore it. Still, it is better to stay hydrated as the dry spell can be a source of discomfort.

At times, the potent ICED Grapefruit can also heighten anxiety levels and leave users feeling slightly paranoid. Some also experience a subtle headache. All three are caused by consuming the bud beyond one’s tolerance levels. Pacing and moderation, however, will keep help users avoid such effects.

Depression is a very serious condition that affects millions of people. When unattended to, it can be life-threatening. As such, it is important to address symptoms such as overwhelming anxiety, dread, and hopelessness. To this end, ICED Grapefruit works effectively.

In inducing its happy high, ICED Grapefruit manages turbulent emotions while calming the mind. It also helps users temporarily forget about nagging stressors in life. For this reason, it can also be used as a stress reliever.

The high THC levels of ICED Grapefruit provide it with potent painkilling properties. It eases body aches caused by cramps or the sharp contraction of muscles. At the same time, the bud also mitigates pains from agonizing injuries.

ICED Grapefruit is also great at putting users to bed. As alluded to earlier, it has sedative qualities that improve both the quality and quantity of sleep so one wakes up feeling refreshed the next day.

ICED Grapefruit produces two phenotypes. One boasts an Indica structure but yields fluffy Sativa buds with large resin-filled calyxes. Meanwhile, the other grows taller with a height that reaches up to 7 feet. Regardless, both have a high calyx to leaf ratio.

The herb is a sensitive plant. Though it thrives under the sunny, warm climate of many Mediterranean countries, the colder, harsher weather of the northern hemisphere may interfere with its growth. Not only that, it can be infected by fungal disease. For this reason, many growers prefer cultivating it inside controllable environments.

Grown indoors, breeders can easily adjust factors such as temperature, lighting, and humidity to bring out the plant’s full potential. Aspiring growers may have to shorten the vegetative period though to manage its height.

Once the flowering period begins, ICED Grapefruit’s buds begin to show colors of pink and flashes of purple.

ICED Grapefruit has a short indoor flowering period of 8 to 10 weeks. Once mature, growers harvest a minimum of 19 to 23 ounces of buds per square meter.

ICED Grapefruit flowers in October, between the first to the last week. It produces 11 to 14 ounces of buds per plant.

Have you ever smoked or grown your own ICED Grapefruit? Please let me know what you think about this marijuana strain in the comments below.