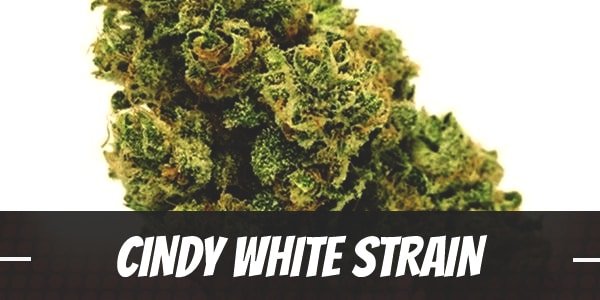 The sativa-dominant Cindy White is a staple in Colorado’s marijuana scene. As a top strain from The Green Solution, an award-winning medical dispensary, word of its efficacy spread fast. Soon enough, its fame propelled it to international shores – especially after The Seedsman distributed its feminized seeds.

In creating the exceptional Cindy White, The Green Solution’s goal was to merge the best traits of Cinderella ’99 and White Widow. From the former, it gained its potent cerebral effects while the latter influenced its excellent resin production, as well as sturdy plant structure, is from the latter.

Though cherished as a medical strain, Cindy White’s effects are also great for recreation. It delivers a true Sativa high with its 18% to 22% THC. For its great effects, it was awarded first place in the “People’s Choice” category during the 2015 High Times Cannabis Cup.

Cindy White is a fast-acting herb that delivers powerful full-bodied effects Right after the first puff, it does not take long before a euphoric buzz swarms the mind. In delivering a clear-headed high, it lowers inhibitions and builds self-confidence. The upbeat mood encourages users to open up about their beliefs and experiences, although some become a little too chatty. Regardless, the recreational hybrid is perfect for sharing on social occasions.

After two or three hours, the Indica effects of the bud begin to creep in. It begins with a light pressure from between the temples and gradually intensifies. Used to the limit of one’s tolerance, the freedom from tension and knots in the muscles can induce laziness. In excess, however, it has the potential to ignite deep, profound thoughts albeit in a fast-paced manner.

Cindy White has the pungent aroma of wet soil with a fresh note of pine. Equally strong is the zesty fragrance of lemons with notable woody undertones.

Cindy White retains the woody taste of pine along with a touch of earth. On the exhale, it leaves a sweet citric aftertaste albeit a little skunky.

It is best to keep a drink nearby as Cindy White tends to be drying, especially on the eyes and the throat. No alcohol though, as it does not pair well with marijuana. Instead of appeasing the dehydration, it makes matters worst by ‘greening out’ users and causing nausea. In such cases, it is best to stick to water for hydration.

As the cerebral effects take hold of the mind, beginners may experience a little headache or some slight dizziness. But, depending on tolerance to THC and disposition before the smoke, others may find their anxieties triggered.

A product from the award-winning medical dispensary Green Solution, Cindy White’s pharmacological value is undeniable. Not only that, it works well for various ailments affecting the mind and the body.

One of Cindy White’s best uses is as an anti-depressant. Its mood enhancing qualities provide a source of comfort for people suffering through mental conditions like depression and PTSD. By sourcing out a happiness from within, it positively alters perception and even lessens worries. Not only that, it appeases symptoms like lack of appetite.

For the mentally and physically drained, the bud’s knack for getting rid of negativity, along with its surge in energy, works in another way. Its stimulating properties reinvigorate the body through and through getting rid of stress and other minor body aches. Relieved of tension, many users fall into a deep unencumbered slumber.

Cindy White is relatively easy to grow. Though Sativa leaning, its stalks remain stout and sturdy. And, because of its feminized form, aspiring growers will only have to focus on care and maintenance.

Although, the plant may have to be subjected to Low-Stress Training during the flowering stage. Apart from keeping the females turning into hermaphrodites, it gives branches the support it needs to carry on the weight of its heavy colas. Other than that, the beginner-friendly hybrid is rather tolerant of common mistakes.

In terms of appearance, Cindy White does not disappoint. Its elongated buds are fluffy and lined with fiery orange hairs. Covering it is a heavy dusting of trichomes.

Indoors, Cindy White blooms anywhere from 8 to 10 weeks. Typically, each square meter yields up to 16 ounces of buds per harvest. But applying the Screen of Green method can add a few more buds.

In the northern hemisphere, backyard growers can harvest at least 16 ounces of buds per plant before the end of October.

What is the Cindy White strain yield?

Cindy White yields 12 to 16 ounces per square meter indoors and 16 ounces or more per plant outdoors.

How much THC does Cindy White have?

What are the origins of the Cindy White strain?

Cindy White was created from a mix between Cinderella 99 and White Widow.

Have you ever smoked or grown your own Cindy White? Please let me know what you think about this marijuana strain in the comments below.