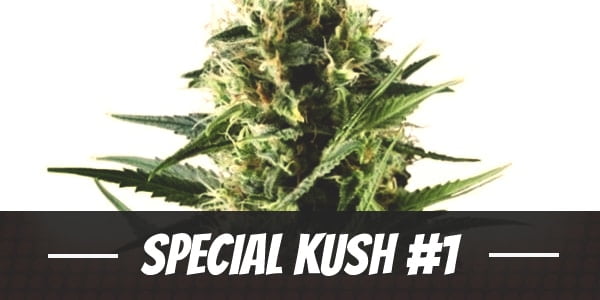 Growing marijuana is the epitome of user experience. But, for many enthusiasts, money is often a problem. Not only are basic requirements like grow lights and nutrient-rich soil expensive, so are seeds. In an effort to find a solution, Royal Queen Seeds crossed two landrace strains.

In Special Kush #1, aspiring growers check off some of the basic requirements for a beginner-friendly plant. First, it is considerably cheap and comes in feminized form. Second, it is firm and can withstand common growing mistakes – an attribute of most Indica-leaning strains.

While being cheap is its biggest selling point, Special Kush #1 has a lot more going for it. Its exotic Afghani and Pakistani ancestry give it a delicious, buildable smoke reminiscent of pure strains. Not only that, both influenced its impressive performance in the grow room.

Overall, Special Kush #1 is a great modern rendition of landrace varieties. Its expansive high is versatile enough to be enjoyed by users of different experiences. Although, at up to 17% THC, too much can be overwhelming.

Unlike its pure Indica parent, Special Kush #1 is a fast-acting strain. Its initial onset, which is largely marked by a euphoric rush to the head, begins almost immediately after a few puffs. And, as it spreads, leaves the mind in a state of peace and tranquility.

For the casual user, the cerebral high is a great companion. It slows down the otherwise fast-paced thoughts of many individuals and replaces it with a profound sense of happiness. Snacks might have to be prepared though. After all, the mental stimulation does tend to get one hungry.

In moderation, the excellent Indica effects of Special Kush are totally relaxing. In waves, the light buzzing pressure from the temples trickles down to the rest of the body. At this point, it is still possible to move around. But, each toke sinks users to their couches until sleep finally overcomes them.

Special Kush #1’s is largely made up of fruit-flavored terpenes that, when drawn in, taste exactly like grape and berries. Washing over the mouth are sweet citric notes with herbal hints of tea. On the exhale, a woody note, reminiscent of refreshing pine, lingers in the mouth.

Everything comes with a cost, including marijuana. For high THC strains, the adverse reactions can range from anxiety to paranoia. But for Special Kush #1, the price is dehydration. Cannabinoids usually inhibit the production of moisture in the salivary ducts as well as the tear ducts. As such, users end up with a cottonmouth and dry eyes.

As a potent Indica-leaning strain, Special Kush #1’s comforting body high provides a reprieve against chronic body aches. THC, being a natural painkiller, soothes the muscles and frees it of tension. It makes for an effective sleeping aid as well.

For users with food-deprived bodies, such as those with anorexia, the analgesic properties ease the sharp convulsions of the stomach and restore the appetite. Because of this, one of the best times to consume Special Kush #1 is right before dinner. It may also be used by cancer patients undergoing chemotherapy.

Special Kush #1 also has behavioral benefits. Its happy high, for example, positively alters negative perceptions of life. It allows one to eat heartily without worrying about body image. Moreover, it removes any of the self-destructive thoughts and emotions that so often bombard people with depression, anxiety.

Special Kush #1 is an interesting plant to grow. Its buds all point to an Indica structure. They are small, dense, and completely frosted in crystalized trichomes. Its stalks, however, are a different story.

Rather than being short, they grow massively tall like Sativas. Grown outdoors, some even tower up to 9 feet. Thankfully, neither the stalks nor the branches grow thin. Instead, they are quite sturdy and can even withstand sudden fluctuations in either temperature or humidity. An added plus factor is its mold and cold resistant genes.

When cultivated in a limited space, such as a grow tent or room, topping early is of utmost importance. Besides keeping it short, it diffuses light and air evenly to ensure the plant grows healthy. Breeders s can also apply other height management techniques like Low-Stress training and super cropping. However, if space is truly a premium then aspiring growers can shorten the vegetative period.

Being the modernized offspring of two landrace strains, Special Kush #1 is one of the most sought-after product from the Royal Queen Seeds dispensary. Partly because, for a premium bud, it is incredibly cheap. Its seeds also come in feminized form, making it great for beginners.

An ode to its excellent genes, Special Kush #1 flowers fast and yields high. In just 7 to 8 weeks, each square meter produces between 15 to 19 ounces of harvest-ready buds.

Landrace strains thrive best in their natural habitat. Thus, it is not surprising to see Special Kush #1 perform even better outdoors. By late September, each of its plants produces up to 19 ounces of sparkling buds.

Have you ever smoked or grown your own Special Kush #1? Please let me know what you think about this marijuana strain in the comments below.