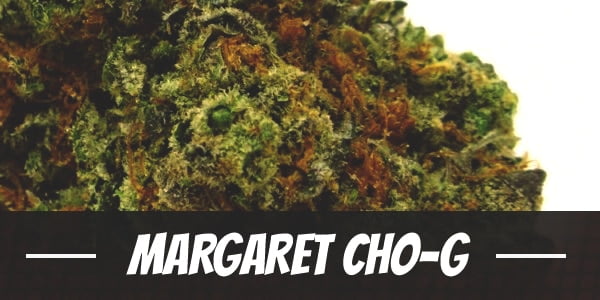 Through the on point deliver of her jokes, Margaret Cho brought smiles to people’s faces. But, apart from being a well-known comedian, she was also outspoken about her support for the legalization of marijuana. Unsurprisingly, the comedian later on developed her own line of strains that would, like her, provide comfort to users all around the world.

A special cut of the famous OG Kush, Margaret Cho-G exhibits similar qualities as its predecessor. Its initial effects are highly cerebral but its comedown is gently tranquilizing. It also has overtones of lemon and subtle undertones of diesel, a quality shared by OG strains.

However, the key difference is its structure. The latter is dominated largely by Indica genes with notably lower levels of THC. Still, it induces powerful psychedelic effects which many appreciate.

Margaret Cho-G is a slow starting strain like many Indica-dominant herbs. Yet, once its effects begin, its intense cerebral onset takes users by surprise. It boosts moods, and stimulates the mind through a rush of euphoria that swarms the mind.

The mental stimulation also paves the way for a greater sense of clarity which, if anything, is a godsend to most casual users. It allows one to focus on a project until much of the tasks under it have been completed. At the same time, the renewed motivation encourages enthusiasts to discuss profound ideas with colleagues who are in search of a breakthrough.

Subtle but powerful, the Indica effects of the bud begin to manifest. It ebbs down from the temples as a soothing wave of relaxation that envelops the body in serenity. In all likelihood, users who overconsume the bud will sink to the couch unable to move. However, those who use it in moderation will notice a feeling of lightness which serves to remove tension so one may move fluidly.

Overall, Margaret Cho-G is a great strain to share with friends. Not only does it foster better relationships, it also increases confidence. Although, it might be best to use it at night due to its potent THC levels of up to 18% and heavy-hitting high.

An alluring combination of grapefruit and pine emanates from opening a bag of Margaret Cho-G. Blending with it are sweet undertones of honey as well as a hint of lemon. Broken apart or combusted, an aroma of diesel fills the room.

Margaret Cho-G hooks users with its deliciously delightful flavors of ripe lemon and grapefruit dipped in sweet honey. On the exhale, it leaves a strong overtone of diesel accentuated by woody pine.

Feeling a little dehydrated is a common experience for users of Margaret Cho-G. It normally expresses itself as a cottonmouth or dry eyes although both issues can occur at the same time as well. Due to its mildness, most seasoned users ignore the said side effects however people who experience discomfort may down a few glasses of water and stay hydrated.

Presumably, Margaret Cho-G was developed for recreational users. After all, that has been the prevalent notion among the public with regard to using marijuana. Still, the Indica-dominant provides medical patients with a reprieve against various conditions that plague the mind and body.

The happy high it induces, for instance, is a prime factor in reducing stress and relieving symptoms of depression. In doing so, it temporarily manages mental health issues with a depressive component such as PTSD.

However, as an Indica-dominant strain, Margaret Cho-G is best used for alleviating physical afflictions such as pain caused by inflammation in the muscles. Usually, too, the problem extends to cramp in the muscles as the swelling can irritate the area and cause nerves to send signals to the brain. As such, the bud makes for a great anti-inflammatory agent.

Margaret Cho-G is an easy strain to grow. Its sturdy stalks, as well as its branches, do not break off easily even when fazed by strong gusts of wind or sudden changes in weather. And, in spite of its preference for a warmer, more humid climate, it grows well in the colder regions of many northern countries.

Sadly, acquiring Margaret Cho-G poses quite a challenge for many. The bud is exclusively sold at Natural Dispensaries with the availability of its seeds not being fully guaranteed. Moreover, it is likely that the breeder maintains a proprietary hold on its strain due to its medicinal use.

While it is possible to grow the hybrid outdoors, it arguably performs best indoors wherein special equipment may be utilized to regain full control of its growth cycle. Additionally, special cultivation methods such as the Sea of Green and Low-Stress Training will encourage the plant to grow to its full potential.

Like most hybrids, Margaret Cho-G has an indoor flowering period of 7 to 9 weeks. Usually, it yields between 10 to 12 ounces of buds per square meter.

Have you ever smoked or grown your own Margaret Cho-G? Please let me know what you think about this marijuana strain in the comments below.