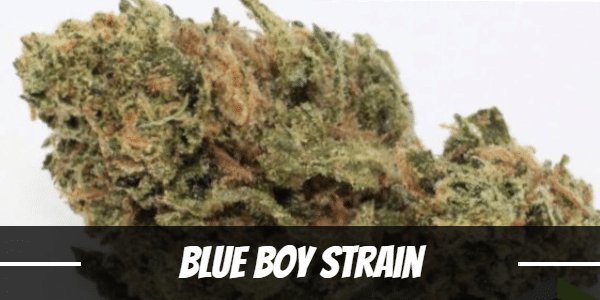 California met Amsterdam when two strains crossed a path that led to the birth of a new hybrid Blue Boy. Looking at its genetics, everything screams legendary. As such, users expect it to be of exceptional quality.

One of its parent strain is Blue Dream, the product of a cross between Blueberry and Haze. Not only is it known for its delightful scent, but it also induces a gentle cerebral buzz that many have come to love. For a long time, this strain has dominated the west coast scene in the USA.

The other strain used to breed Blue Boy is a product of Sensi Seeds, an outfit based in Amsterdam. Northern Lights need no introduction. As famous as the Blueberry and Haze strains are, none can match the popularity of this one. Northern Lights has also produced a few phenotypes, with #5 being the most widely used.

As one can see, looking at the genetic lineage of Blue Boy reveals the who’s who of the cannabis world. In fact, the strains mentioned above have all received countless accolades from the High Times Cannabis Cup.

Given its background, Blue Boy has an incredible reputation to live up to and better, if it can surpass.

Here are some amazing seed deals. Buy 10 and get 10 seeds for free

Blue Boy does not lack potency. In fact, tests show it is in the 20th percentile. But the way it works often misleads people into thinking it is a mild strain.

We don’t currently sell the Blue Boy seeds. Check out other Hybrid seeds in our marijuana seed bank.

Some strains hit hard while others need a few minutes before kicking in. This one, though, can take more than ten minutes before even announcing itself. And when it does, it does not come surging in with ferocity. Instead, a gentle uplifting sensation creeps into the mind and the body.

Gradually, users start to feel its calming effects spreading all over while an electric buzz induces a cerebral euphoria. Feeling relaxed, happy, and energetic at the same time, most people tend to become more social. In a gathering, it is not surprising to see users giggling and laughing more than usual.

In many instances too, users report an increase in sexual appetite. While there are also other strains that cause arousal, only a few do not lead to a couch-lock. Blue Boy delivers an intense body high that has obvious benefits to medical users. But it does not have the numbing buzz that sedates people.

Blue Dreams play a significant role in influencing the aroma of Blue Boy. As such, the pungent sweet and fruity scent of berries blending in with an earthy freshness has proven to be highly desirable for most people.

The best strains in the world do not only deliver a fantastic cerebral and physical high. It should also not only a very desirable smell but match it with its flavors as well. Again, Blue Boy delivers with flying colors. Responsible for much of its zest is the Blueberry lineage and the spicy lingering aftertaste.

We don’t currently sell the Blue Boy seeds. Check out other Hybrid seeds in our marijuana seed bank.

Alas, the best of them all is often the harder to handle. Blue Boy, like others, can cause a few side effects. The more common ones are dry mouth and dry eyes. It seems to occur much more so than others even when using virtually the same amount. But that is not what users should be concerned with.

Instead, there are reports from some users who experienced an elevated degree of anxiousness and feeling paranoid. People who have anxiety disorders will want to avoid Blue Boy, or if they are going to, use half of the usual dosage to stay on the safe side.

Another thing that is not a big deal but troublesome is getting a headache. It does not affect most people, though.

It may take a while before Blue Boy creeps in, but when it does, it brings traits that are beneficial to medical marijuana users. The combined mental and body effects induce relaxation and feeling euphoric. Hence, it helps in reducing or eliminating stress.

Meanwhile, the Indica side has enough potency to help alleviate the symptoms of muscle spasms as well as other mild pains and aches.

Seeds for Blue Boy, unfortunately, are not available. As such, the only way one can cultivate this plant is to somehow find someone who has the strain and then get a clipping for cloning.

Despite the lack of information, we do have a rudimentary idea of how it grows. Like most hybrids, it should thrive in a climate similar to the Mediterranean. It is also safe to assume that it can tolerate a colder temperature.

Depending on preference, growers can choose to cultivate it in their garden or grow it inside the house. Either way, there will be work and a lot of tending to so that it becomes healthy.

By the seventh week, growers should already prepare but not necessarily to trigger the flowering phase. Giving it a week more or two will help strengthen it. Once ready for harvesting, it should produce up to 14 ounces of buds every square meter.

In open space, Blue Boy may exceed seven feet tall. Flowering time should occur in the first week of October. Each plant then can produce 14 or more buds come harvest time.

What is the Blue Boy strain yield?

How much THC does Blue Boy have?

What are the origins of the Blue Boy strain?

Blue Boy was created from a mix between Blue Dream and Northern Lights No. 5

Have you ever smoked or grown your own Blue Boy? Please let me know what you think about this marijuana strain in the comments below.