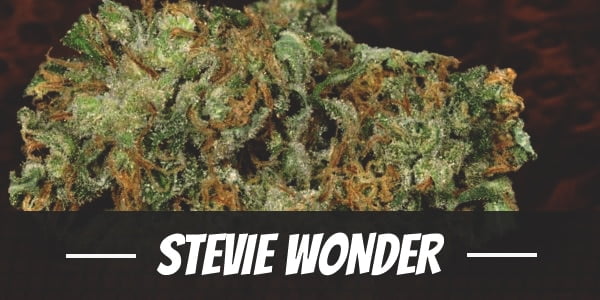 Stevie Wonder has brought joy to countless people worldwide over many decades. His legacy lives on through the music he created remains in stores. Once on tapes and CDs, now it lived forever in the digital world. In the same manner, the strain has also brought the wonders of its effects on its users.

For that to happen, though, the original breeder of this strain has to use not two but four hybrids.

Known for an intense psychedelic cerebral buzz, one of the four is Trainwreck. Another strain used is Sensi Star, a hybrid that induces powerful relaxing effects and has proven itself worthy through accolades in several High Times Cannabis Cup competition.

Further enhancing the already potent effects of Sensi Star is another heavy hitting Indica strains that not only numbs the whole body, but also causes mental haziness – Bubba Kush. Finally, the use of Blueberry seems to be more for acquiring its incredible flavors more than its effects which are very mild compared to the others.

Four strains, it must have taken a lot of time before the original breeder was satisfied and released Stevie Wonder. A Sativa-dominant hybrid that delivers a beautiful mental high albeit a tapered down version of Trainwreck.

Listen to music and notice how it takes listeners on a journey. Feel how it touches the soul and emotion. Notice how people seem to float on the surface of the sea, rising and falling with the crests and troughs of waves. That, in a nutshell, is how Stevie Wonder, the strain, works.

At its onset, an uplifting sensation comes surging into the mind. This is accompanied by a warm buzz near the eyes and the forehead. As the pressure builds up, it finally releases itself to induce a euphoric feeling. The cerebral high is very intense, and if this was Trainwreck, one could expect a mind-bending experience. But as alluded to, it does not reach that point. Perhaps in some ways, it is also due to the influence of its much smaller Indica side, in which it seems to offer stability to the mental effects.

Meanwhile, the ebbing mental experience, even as it continues to induce a potent euphoric feeling, is also influencing mental clarity. In other words, throughout these incredible effects, the mind remains sharp.

For most people, Stevie Wonder provides hours of pure pleasure. As the effects start to subside, one thing many users are likely to feel is a severe case of munchies.

In some ways, the odor Stevie Wonder emits is a blend of everything that makes cannabis smell desirable. Amidst the floral scent that spreads into the air around the buds, the pronounced sweet aroma of orange makes it divine.

After setting the tone with its fragrance, one can hope that Stevie Wonder tastes as good as how it smells. To that end, it does not disappoint. The woody flavor it has is reminiscent of being in a pine forest contrasted by the tropical fruity flavors with a note of orange or grape.

Even as it provides an intense experience, one thing many people will appreciate about Stevie Wonder is that it does not seem to have any worrisome side effects.

Of course, the usual cotton mouth and eyes may become apparent, so does a mild headache. But these are almost always the same adverse reactions one can expect not only from Stevie Wonder but also with any other strain.

Among the most notable use of Stevie Wonder is in pain relief. Even if the Sativa effects can already wipe ill-thoughts from the mind, the overwhelming relaxing effects it induces further eliminates any trace of stress. People dealing with PTSD and depression, for instance, may also find this strain useful. Already, such mental disorders are challenging to manage. What the hybrid can do is to uplift the spirit which then helps patients in their effort to think in positive terms.

As mentioned, many people are likely to feel hungry with its use. Hence, if that is how it affects some people, then it becomes beneficial if the needs are to have something to help boost the appetite.

Stevie Wonder should thrive in both outdoor and indoor environments. Before buying the seeds, though, be sure to check the genetics with the vendor. The reason for this is that there may be other variants of this hybrid. It is also possible that there are others that go by the same name, but its parent strains are entirely different from this one.

We estimate that from 9 to 11 weeks, growers do have the option of triggering the flowering phase of Stevie Wonder. Each square meter under a standard 600w of grow light can potentially produce 10 to 12 ounces of buds.

Stevie Wonder, when planted outdoor, can grow tall at anywhere from 9 to 12 feet. Once it starts to transition from its vegetative phase to the next sometime in October, it will not be long before growers harvest at least 12 ounces of buds.

Have you ever smoked or grown your own Stevie Wonder? Please let me know what you think about this marijuana strain in the comments below.