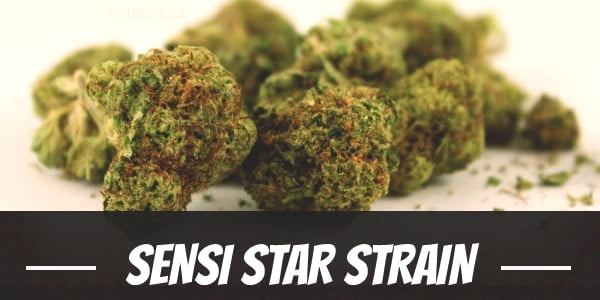 Sensi Star is a cryptic little gem, known for its potent nighttime effects and unclear origins. It is an indica-dominant smoke that can make you feel heavy and very relaxed, which is one of the reasons why it has bagged so many prestigious awards in the last few years, and has accumulated loyal fans everywhere in the process.

A strong, full-bodied strain, Sensi Star hails from mysterious roots. This hybrid usually clocks in at around 70% indica, and therefore has potent and enjoyable relaxing properties. A product of the talented Paradise Seeds labs, this strain has won awards in 1999, 2000 and 2005, scoring high at the High Times Cannabis Cup.

Download my free Grow Bible and grow your own Sensi Star!

Sensi Star is a bit of a show-stopper, and with right, as it is quite a spectacularly formed flower, pleasant not only in effects but also easy on the eyes. This indica-dominant hybrid is a great choice for a nighttime strain, as it is known to relieve symptoms of restlessness and insomnia, allowing for a restful night of sleep.

Sensi Star is an extraordinary strain, and it comes in fast and hits you hard. Its effects are intense to say the least, automatically relaxing you from head to toe, even in the most stressful situations. Its head high can be quite heavy, so if you are an inexperienced smoker, handle with care and go about your experience with a light hand.

This plant creates a strong cerebral high that is heavy at first, but then turns into a smooth and soothing high shortly afterwards. Sensi Star relieves you from your worries with its potent euphoric high that gives way to a wave of positive feelings, enveloping you in good vibrations all around.

Sensi Star will instantly make you feel happy, even on greyer days. This indica-dominant strain induces a strong uplifting feeling, yet in higher doses can turn into a strong sedative, as it can make you sleepy and then successfully help you delve into a long and restful night of slumber.

Sensi Star is as pleasant in its smell as it is in its effects. This superstar smells like fresh pine on a sunny day, mixed up with a strong spicy note that will invigorate and appetize you. This strain is both sweet and woody smelling and finishes off with hints of earthy freshness.

This strain tastes like a shock of sweet lemon, with hints of spice and pine. Sensi Star boasts of a woody flavor as well as a pungent earthy note, that will make your mouth water. This strain is especially pleasant to smoke, leaving you with a distinctly sweet aftertaste in your mouth.

Sensi Star has some side effects, but it varies for each smoker. This strain can case a dry mouth sensation along with dry and itchy eyes, that will make you feel slightly dehydrated. For some smokers, this may also result in a mild form of nervousness, but rarely one that lasts.

In some cases, one may encounter a slight dizziness, as this strain can be quite potent, especially in higher doses. Sensi Star can make you feel slightly paranoid, and in some very rare instances, it may cause a mild headache in you, especially if you are not used to this strain’s strength.

Sensi Star is popular in the medical cannabis community for its many great talents, allowing patients to resume a relatively normal life, despite their illnesses. This strain is a very useful tool in the fight against chronic stress, making it easier for patients to find a state of relaxation that last them longer than prescriptions medication, and with less side effects.

This indica-dominant strain has also been proven to be effective in managing pain. Chronic pain especially has been treated successfully with this healing strain, and ailments such as muscle pain, back pain, chronic migraines and even joint pains are known to have been treated and eased with the help of Sensi Star.

Mood disorders such as depression and anxiety have also been positively soothed with the help of Sensi Star. This strain has an undisputable ability to relax both the mind and the body, making it easier to feel problem-free and elated. Minor pains that can result from feelings of stress, such as headaches, can as a result also be healed with this strain.

Sensi Star does well in both indoor as well as outdoor settings. It is especially hardy outdoors, as long as it is kept aways from frost. It does especially well when it it kept sheltered from the rain, and is given a lot of sunlight to draw energy from.

Superstar strain by Exotic Genetix is not to be confused by another hybrid called Super Star. Founded in 2008, the breeder has already produced several other hybrids that have won awards. Read our full review!

It is known for having the capacity to producing an average to high yield during harvest.

This strain grown indoors can be expected to yield an average of about 12 ounces of bud per square meter planted. Sensi Star takes around an average of 8 to 9 weeks to flower and become ready for a hearty harvest.

What is the Sensi Star strain yield?

How much THC does Sensi Star have?

What are the origins of the Sensi Star strain?

Have you ever smoked or grown your own Sensi Star? Please let me know what you think about this marijuana strain in the comments below.