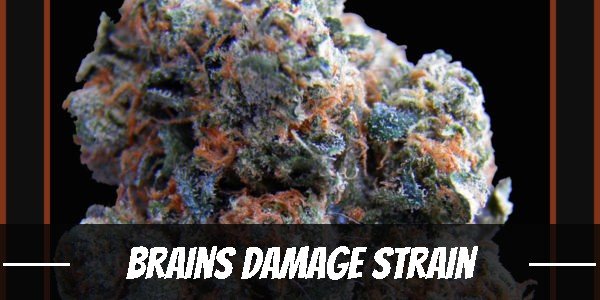 Some of the famous inventors in the history of mankind were insane. At least, that is what their peers thought of them until they showed their creations. In the same manner, there are those who believe people using marijuana must have damaged brains. After all, cannabis is an illegal substance in many countries.

But of course, there are places where it is legal to use. In some, it is okay for recreational use. In others, it is only for medical purposes. Regardless, there are grounds for its legalization, and these are the things not many people understand today.

When thinking of the impression that others have on users, one strain comes to mind – Brains Damage. It has an ominous sounding name that is suggestive of everything that is wrong with using marijuana. But as it is, a lot of strains do come with crazy or even stupid names, but they all can bring incredible benefits.

Most hybrids created are what could essentially be termed as designer strains. In other words, there are specific effects and traits that the creators wanted. By crossing two or more hybrids across generations, the intent is to have one hybrid possessing the desired characteristics.

In the case of Brains Damage, it has an energizing Sativa effects that is complemented by a heavy Indica body hit.

There must be a reason behind a sinister sounding name. In the case of Brains Damage, it is due to its high THC content which can be up to 23%. Growing the plant itself is easy, but using it is another thing. In fact, this is one strain that beginners may not want to begin using.

Looking to buy seeds like Brains Damage? Check out our marijuana seed bank.

Its effects are evident after a couple of tokes as it rushes into the head. Although the onset itself is not the kind that causes a pulsating buzz, it is still quite intense. Almost immediately, users feel a surge of energy coursing in as well as an uplifting se nsation. Early on, most people may find themselves feeling happy and euphoric. At the same time, the mind becomes clearer and more focused. For some, it also sparks creative thinking.

At this point, most users will have droopy red eyes and locked to their couches or beds. After an hour or so, it is common for users to fall asleep.

Brains Damage comes with an insanely delightful fruity scent accompanied by an earthy and sweet tone. It is, without a doubt, one of the best smelling strains one can get ahold of and use.

Where its fragrance is straightforward, its flavor is a strange and unique mixture of skunk and diesel blended with tropical fruits and pine wood. It also has an accompanying hint of menthol which adds to its smoothness.

One of the most common reactions to using Brains Damage is having red eyes. At the same time, users are likely to feel their throat drying. Other than that, about the only concern is that there are some who may feel a little anxious.

These adverse reactions are more pronounced when users overuse the strain.

Once the Indica effects kick in, it leaves users lethargic and uncaring of the world around. As such, it does a pretty good job of reducing stress. For that reason, it may be helpful in dealing with depression and other forms of mental disorders.

Looking to buy seeds like Brains Damage? Check out our marijuana seed bank.

A couple of things that Brains Damage can also do well is causing people to feel extremely sleepy and feeling very hungry. Both of these, for obvious reasons, benefits people who have trouble sleeping, or those who need to stimulate their appetite.

Once both instances do occur, we can say that in most cases, users fall asleep feeling hungry due to the substantial couch-lock effects.

Growing Brains Damage is easy. So, that makes it ideal for those who are new to cultivating plants. It can also grow in open spaces and inside the house. In most cases, we prefer to grow cannabis indoor because most strains respond well to hydroponics. But for this hybrid, it produces a much higher yield if planted outdoor.

Brains Damage starts to flower in as early as 8 weeks. Indoor, it grows up to 3 feet tall. Once harvest time comes, it can produce only around 5 ounces of buds per square meter.

Let to grow free in a garden with proper spacing, this plant can grow up to 6 feet tall. This is one strain in which growers who can plant outside the house are deemed as fortunate. It starts to flower on the last week of September, and each plant can produce up to 36 ounces.

What is the Brains Damage strain yield?

How much THC does Brains Damage have?

What are the origins of the Brains Damage strain?

Have you ever smoked or grown your own Brains Damage? Please let me know what you think about this marijuana strain in the comments below.