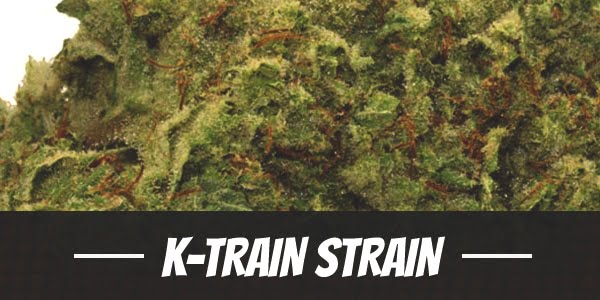 Here is a little trivia. In China, they have the K series of trains. These are the old ones that have remained in use for many decades even as they have already build a massive network of high-speed trains. Does that denote something with regards to the cannabis strain K-Train?

Let’s put it this way. The K trains are slow but not that slow. In other words, the strain is not as intense as one of its parents, but it is still potent in its own rights. In fact, it remains one of the strongest strains one could get ahold of.

K-Train comes from a prestigious line – the ever famous and lovable OG Kush and the notorious McGregor, oops, sorry, the Trainwreck.

Anyone who has been using cannabis for a while now must have had experiences with the OG Kush. If not, they have heard about it then. In fact, what made it famous is its ability to uplift the mood.

On the other hand, Trainwreck is as notorious as one cannabis hybrid could get. It is known for the speed in which its effects rush in and in the process, usher in a full euphoric feeling.

By combining the traits of the parent strains, the K-Train is effectively a milder version of the Trainwreck with the enhanced mood-altering traits of OG Kush.

K-Train, as mentioned, is a milder version of the Trainwreck. Where the parent can induce psychedelic effects, this one does not. Instead of a maddening rush of euphoria, users are left feeling happy. Such is the most profound effect of this strain.

It does so by rushing in and immediately uplifting the mood. Users generally feel the euphoric sensation that leaves them at the very least, in a happy and jolly mood. No, there is no foggy mind, hazy thoughts, or psychedelic effects to deal with. Instead, most will find themselves having a clearer mind.

At the same time, the effects may also give a mild energy boost. It can be helpful as one of its effects also includes arousal. As such, couples are likely to favor the K-Train over others. One more thing. The strain does induce creative thinking so some people may find it easier to come up with one kinky thought after another.

At any rate, the K-Train also comes with a smaller Indica side. As such, it is not surprising to find one’s self relaxing. In many ways, this combination of mental and physical effects is what makes it ideal for medical use.

K-Train chugs along nicely over a spread of a few weeks and along the way, emits a wonderful musky odor of earth with a sweet tone. Although it is not considered to be one of the best smelling strains, it does have its own appeal to most people.

While it does feel a little underwhelming with regards to its smell, the K-Train does come with an interesting blend of fruits and coffee to go with its aroma. As a result, people should find its taste highly delightful.

For sure, if there is an unwanted effect from its use, it is feeling the eyes and mouth dry. Such is normal with the use of cannabis. About the only way to minimize these concerns is to use well below personal tolerance limits and drinking lots of water.

At the same time, a few people may also feel slightly dizzy especially during the onset of its cerebral head rush. For that reason, people smoking the K-Train or any weed, for that matter, should refrain from driving.

Also, some people could also feel paranoid. Such symptoms are temporary and if it does occur, is often mild. Again, be cautious and opt to stay on the safer side with regards to the amount used.

From OG Kush, one trait inherited by K-Train is its ability to wipe away stress. Feeling uplifted and happy or even euphoric, even those with depression should greatly benefit from these effects.

The strain not only has benefits for mental health. It also comes with other benefits such as pain relief. In most cases, it is due to the combination of altered behavior where the focus shifts away from physical pain and the relaxing body effects of the Indica side. One other benefit of using K-Train, as reported by many medical cannabis users, is how it helps them with cramps.

Finally, once the profound effects begin to subside, most people generally feel drowsy. In fact, it is not surprising that users tend to doze off without them even realizing it. Used in that way, then it becomes beneficial to insomniacs, for instance.

While Sativa plants mostly grow taller, the K-Train tends to be bushier. In the outdoor, a sunny environment is conducive to its growth. Beginners will be pleased to know that it is not a hard marijuana plant to grow and cultivate. As such, that makes it a good starter.

As for cultivating it indoor, it will grow with soil as the medium, but it thrives best using hydroponics. Combining it with LST and SOG training methods should help it achieve an explosive growth. Moreover, it should also result in a better than average yield.

All it takes is nine weeks, and the K-Train is ready for its flowering stage. Growers can trigger this phase by switching to 12/12 light cycle and watch the buds form. At a later date, they can expect as much as 28 ounces per square meter.

Sometime during the last days of September, the K-Train should soon start its flowering phase. Each plant can yield up to 36 ounces of buds.

Have you ever smoked or grown your own K-Train? Please let me know what you think about this marijuana strain in the comments below.