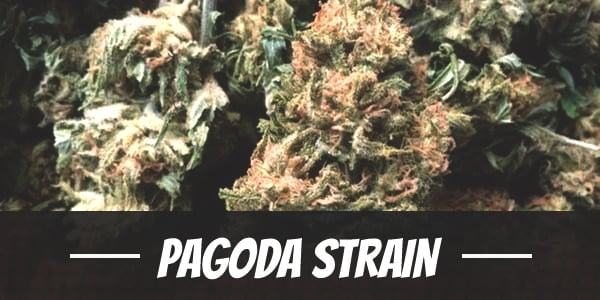 Pagodas are a source of architectural awe. It inspires the human eye with its shape as well as religious, societal, and historical significance. While it may not be the same in all aspects, the cannabis industry’s Pagoda does stimulate the mind and raise creativity levels.

Its THC levels are quite high, between 16% to 22%, hence why its dense nugs are coated in milky trichomes. While this should be a sign to be caution for recreational users, it is enticing to trichome enthusiasts that want to create hash or oils. Its buds are heavy too which allow growers to extract more from it’s the sticky frost.

Laying the base for its foundation is Apollo 11 and Appalachia. The former has powerful head high that takes the mind up to space. Meanwhile, the latter has a dreamy buzz which is what makes the body float. At the comedown, it cradles users back to earth gently without overwhelming users.

It delivers a euphoric onset that uplift the mood immediately within minutes after the first few puffs. It temporarily allows users to forget problems or negativity. Instantly, there is a change in behavior while clearing headspace. Replacing it are cheerful or creative thoughts that motivate users and leave one feeling cheerful. The upbeat disposition also helps one work for longer periods of time.

A tingling sensation begins to intensify around the temples. It frees the tension around the head before trickling down to the rest of the toes, soothing each muscle it passes. It gradually envelops users in deep relaxation. However, it does not lock users to the couch.

One of the best times to use the strain is right before a meal, around brunch or lunch with friends. It stimulates the appetite especially after the initial cerebral stimulation uses up some of one’s energy. For users who consume the strain alone or are running errands, it might be best to have some snacks prepared ahead of time. Although, preparing food is also a way of dispersing the energy.

Because of its great wake and bake qualities, Pagoda is the perfect companion that is best used in the morning or early afternoon in lieu of a cup of coffee. It creates headspace for ideas to flourish while invigorating the body with an energy that makes users limber to pursue or complete tasks.

Pagoda has a fruity scent that intensifies once the buds are either broken apart. It reveals overtones of pineapples, melons, and grapefruits. It has tangy notes with undertones of chemical or fuel upon combustion. Balancing it out is the aroma of wet soil that tones down the sourness.

Consuming Pagoda is like drinking a tropical shake. It bursts in the mouth with a fruity overtone such as pineapples, melons, and grapefruits. Bringing out its sour undertones is its blend of chemical and fuel. Mellowing it is the aroma of earth which leaves a rich aftertaste on the exhale.

Dry eyes and a cottonmouth are two common reactions to smoking Pagoda. It is inevitable due to the moisture-inhibiting cannabinoids in marijuana but mild and temporary. Seasoned users usually ignore the discomfort, but beginners may ease it by downing a few glasses of water. Avoiding alcoholic and caffeinated drinks will prevent the side effects from worsening.

Pagoda is a Sativa-leaning strain with impressive recreational and medicinal effects. Its energizing high has restorative effects on the mind and the body. It uplifts the mood while bringing back a bounce to each step. Hence, it is perfect for crushing away the stress and fatigue caused by chronically overworked.

At the same time, it also manages symptoms of mental health issues like depression, anxiety, and PTSD. It stabilizes turbulent emotions while temporarily appeasing the feeling of hopelessness. In doing so, it also inspires a sense of happiness from within that brings back motivation to fulfill tasks.

Its soothing buzz also has painkilling effects too. It releases tension from the muscles to relax the body of pains and aches. Furthermore, its anti-inflammatory properties reduce redness and appease swelling that sometimes cause painful contractions or spasms.

Pagoda is a Sativa-leaning strain with a sturdy frame. It can withstand the lack of sunlight, shorter days, and cooler temperatures of the northern hemisphere. As such, it tends to flower earlier compared to other tropical varieties.

Still, it is not immune the overnight death that frost brings. Growers should install a temporary enclosing to not only keep it from dying but also protect it against harsh weather like heavy rains which may break its branches. To ensure it gets enough sunlight, one should cultivate the strain in a strategic area where there are no obstructions.

Indoors, it will need to be topped early. This will keep it short and manageable while also initiating the flowering period. During this time, growers may start utilizing growing techniques that will encourage bud production such as the Screen of Green method. It requires weaving the branches into a screen situated above the current canopy. It creates multiple budding sites that will significantly increase turnout especially when pairing it with a hydroponics setup that delivers nutrients straight to the roots.

TIP: Looking to buy seeds like Pagoda? Check out my seed shop

Pagoda has an indoor flowering period of 8 to 10 weeks. It yields at least 12 to 16 ounces of buds once ready for harvest.

An early flowerer, Pagoda flowers from the second to the last week of October. Growers can expect at least 16 ounces of buds per plant after the buds finish maturing.

Have you ever smoked or grown your own Pagoda? Please let me know what you think about this marijuana strain in the comments below.