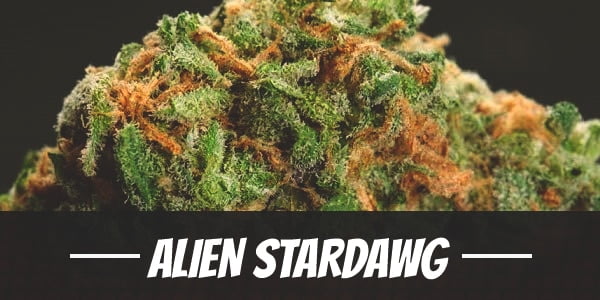 Nothing short is expected of Alien Stardawg and its out-of-this-world high. It has potent THC levels of up to 23%. In moderation, it takes the mind on a joyride to space as the strain’s Sativa kick hits. Free to explore, users are free to pursue creative or personal projects.

Creating the strain was an easy task. Alien Kush contributed to its extraterrestrial foundation of a soaring head high. It also has an impressive growth profile that makes it easy-to-cultivate for beginners. Meanwhile, Stardawg influenced its sour chemical terpene profile, massive trichome production, and medicinal effects.

While it is popular among thrill seekers, Alien Stardawg can also be used among beginners. Its lowest THC is at 14%, which provides the same effects without the potential downtime. It is best to consume the strain under the guidance of a seasoned friend.

During the onset, it delivers a rush of energy that lasts throughout the day, especially when consumed in place of coffee. It invigorates the mind and enlivens the body so users can move around with relative ease. Its tingling sensation is felt all over before it gradually turns into a low hum that supplies one with a continuous spirited spark.

A behavioral change is immediately visible after a few tokes. It leaves users feeling happy as broad smiles paint the face with bright exuberance. The uplifting high inspires confidence as well. Thus, one of the best times to use the strain is when hanging out with like-minded friends. It encourages enthusiasts to share experiences and memories to a group without instantly retreating to the proverbial shell.

Users continue to exude a lively disposition as the Sativa-leaning strain continues to sustain its blissful stamina. Although intense, it does not lock users to the couch. Instead, it keeps the body limber like a well-oiled machine. Thus, one may also use the strain before a slew of activities as it keeps tiredness at bay. With that said, Alien Stardawg is best used in the morning or early afternoon. It keeps users productive by stimulating the mind and providing the same vigor throughout the body. Using at night pushes back bedtime.

Alien Stardawg has a sharp chemical aroma due to its diesel or fuel overtones. Enhancing it are notes of citrus and cherry which give it the sourness a  sweet hint. Crushing then combusting the buds produces a spicy pepper with undertones of hash.

Drawing Alien Stardawg’s smoke can induce a little bit of coughing, especially among first-time users. However, it eventually settles, and the tongue tingles with its sour chemical flavors of diesel and fuel along with citrus. On the exhale, it leaves a sweet cherry aftertaste complemented by the taste of pepper.

A cottonmouth is a normal reaction to Alien Stardawg’s moisture inhibiting cannabinoids. At times, it is accompanied by red eyes. It is barely noticeable, and most seasoned users often ignore the dryness. However, users may also ease it by hydrating before, during, and after the high.

Stress relief is one of the top reasons that users consume cannabis. It has cannabinoids that reduce stress from head to toe. To this end, Alien Stardawg provides significant therapeutic benefits that help manage the symptoms of chronic stress.

In inducing its happy high, it clears the mind of looking deadlines and overwhelming anxiety over work. At the same time, it also improves moods while stabilizing turbulent emotions, which are both related to mental health issues like depression and PTSD. Hence, it makes for a good anti-depressant as well.

It has a soothing buzz that releases tension, pains, and aches. It has anti-inflammatory properties that reduce swelling in the muscles. It relaxes the body and prevents it from spasming. Because of this, it works as an effective anti-spasmodic that provides comfort to patients with multiple sclerosis, fatigue, cramps, and injuries.

Its ability to appease painful contractions also work effectively against gastrointestinal pains. It eases the stomach, so food travels down faster. In doing so, it allows patients with eating disorders such as anorexia or cachexia that prevent one from eating heartily.

Alien Stardawg presents a typical Sativa structure. It is tall but, because its stalks are thin, it is extremely lanky. Its branches are also quite feeble and may break easily due to various growing conditions like strong winds or heavy rains. In such cases, it is best to protect the plant by installing a temporary enclosing especially when growing it indoors.

It is a great candidate for the Screen of Green method. Growers can not only keep it short through the technique but also encourage bud production through even light distribution. One only needs to weave the branches into the net and spread the budding sites.

A hydroponics setup will also improve yields and trichome production since it delivers nutrients straight to the roots. The buds it produces are also ‘cleaner,’ as it rarely requires the need for pesticides. However, for tastier buds, growers should consider using soil as a medium. It is also easier to manage and cheaper.

TIP: Buy seeds like Alien Stardawg at our seed bank

Indoors, Alien Stardawg flowers between 10 to 12 weeks. Growers are rewarded with at least 12 to 16 ounces of buds per square meter at harvest.

Alien Stardawg flowers during the last few days of October to the second or third week of November. It yields at least 16 ounces of buds per plant once fully mature.

Have you ever smoked or grown your own Alien Stardawg? Please let me know what you think about this marijuana strain in the comments below.