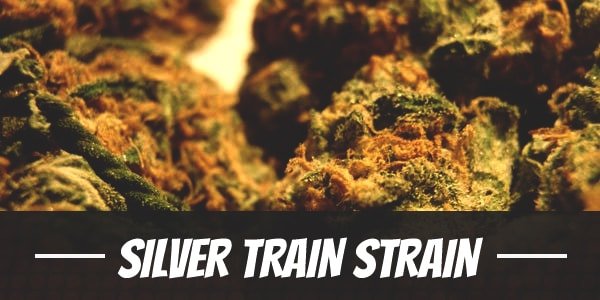 Silver Train is a strain that boasts potent levels of 17% to 24% THC. It delivers an energizing buzz that rushes all over the body starting from the temples. It wakes users up from lethargy while eradicating the heaviness in the eyelids during the daytime.

The award-winning Super Silver Haze laid the groundwork for its Sativa-leaning genes. It has an uplifting head high that blends together well with its stimulating body buzz. Meanwhile, Trainwreck intensified its potent effects and therapeutic benefits. It also strengthened its frame for a better growth profile.

One thing to note is that Silver Train must be used with caution. Apart from being potent, it is quick-acting and can render enthusiasts stunned with ist overwhelming head high. In moderation, however, it induces a pleasant recreational and medicinal strain.

Silver Train has a euphoric onset that instantly uplifts the mood. A behavioral change is instantly visible. Broad smiles brighten the face as cheerful memories enter the mind. It also encourages confidence so users can socialize comfortably without feeling overly conscious.

In spite of the hour or two that passes, an energizing buzz continues to invigorate the muscles while appeasing tension or tightness. It allows users to complete tasks without feeling tired.

Because of this, Silver Train is best used in the morning or afternoon. It improves productivity with its invigorating head to toe effects. Even at the comedown, it continues to pump users up for the day. Using it at night will only prolong bedtime.

Silver Train resembles its parent Trainwreck the most. It has a sweet aroma that is perfectly complemented by a tinge of spiciness. Breaking its buds apart intensifies its herbal flavors but, combusting it turns its fragrance into a refreshing pine.

Similar to its smell, Silver Train introduces itself as a sweet smoke in the palate before coating the tongue with the taste of spices. It tingles the mouth until its herbal undertone washes over the initial flavors. On the exhale, it leaves an aftertaste of pine.

Dry eyes are one of the most common reactions to marijuana smoking. Accompanying it is a cottonmouth as cannabinoids begin to inhibit saliva production. Although mild, the unavoidable dry spell lasts for hours – to which, users can manage by staying hydrated throughout the day.

Although rare, it is possible for Silver Train’s potent psychoactive effects to overwhelm the mind when used in excess.  It can lead to a subtle feeling of paranoia that eventually ends with a headache. However, users can totally avoid the side effects by using the strain in moderation instead.

Silver Train is an equally impressive medicinal strain. It has an uplifting head high that slows down the fast-paced worries resulting from stress while enhancing the mood. Similarly, it can also work as an anti-depressant to manage symptoms of depression, anxiety, and PTSD.

Its high levels of THC also present physical benefits. It turns into a natural painkiller that oozes away aches and pains all over the body. Replacing it is a subtle rush of energy that invigorates users against fatigue.

Arguably, one of the best times to use the strain is right before a meal. It stimulates the appetite and, in soothing away cramps, it also allows food to move easily through the stomach. Because of this, it is a great companion for patients dealing with eating disorders like anorexia or cachexia.

Silver Train has a typical Sativa structure. It is tall and lanky. However, its branches are not thin. Instead, it is thick enough to withstand unpredictable growing factors like strong winds, cool temperatures, and changing weather conditions.

Still, as a tropical strain, it prefers long days under the sun. Thus, it may have difficulty adjusting to the cold weather of the northern hemisphere during the first few weeks. However, it eventually adjusts as more weeks pass by and the plants grow bigger. A temporary enclosing will be needed for protection against snow during the early winter which may kill it overnight.

Indoors, growers can control factors like temperature, lighting, and humidity to mimic a Mediterranean climate. It will need to be topped due to its vigorous vertical growth. Left unattended, it can cramp up the already limited growing space and hinder light and air circulation. Topping it early will not only keep it short but also initiate the flowering period.

Its structure makes it the best candidate for the Screen of Green method. It requires installing a screen on top of the current canopy during the flowering period. Weaving the branches into the net enhances bud production through even light distribution so users end up with higher yields.

Another way to increase yields is by using the hydroponics method. It delivers nutrients directly to the roots so plants double yields while improving trichomes. However, it may be a more expensive

Silver Train has an indoor flowering period of 10 to 12 weeks. It yields at least 12 to 16 ounces of buds per square meter at harvest, making the long wait well worth it.

In the northern hemisphere, Silver Train flowers from the last few days of October up to the second or third week of November. Growers can usually harvest flowers of at least 16 ounces per plant.

Have you ever smoked or grown your own Silver Train? Please let me know what you think about this marijuana strain in the comments below.