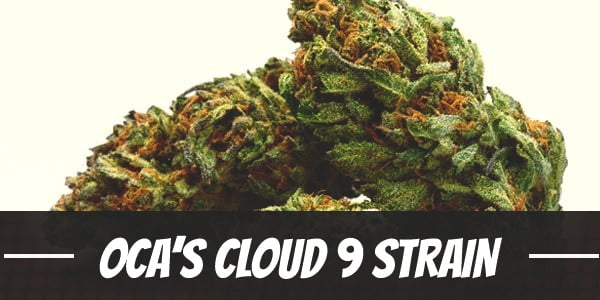 “Energizing” is one word that best describes OCA’s Cloud 9. Not only for its tangy scent but also its effects. For patients with mental health issues like depression and anxiety, it is the perfect strain to toke as it induces a happy high without the downtime. Additionally, its high levels of the psychoactive THC offers sweet relief from fatigue and pain.

It traces its origins from Borderliner, a popular Brazilian landrace with typical Indica traits. Its high is heavy-hitting, settling into the limbs and lulling users to sleep. Often, it is best used at night.

However, Sativa-leaning OCA’s Cloud 9 is anything but. Apart from where its genes lean in the spectrum, it is a daytime strain that refreshes users from any of the accumulated stress throughout the day or the week. It heightens motivation to pursue personal projects or complete tasks.

One thing to remember when ordering a batch of OCA’s Cloud 9 is to read the label. A strain of a similar name, developed by Kiwiseeds and Dampkring Classics, is also available in dispensaries.

OCA’s Cloud 9 is a highly potent Sativa-leaning strain. It boasts THC levels between 28% to 33%, depending on when the batch was made. Still, each bowl is enough to whisk away the mind off to space.  Not to mention, it is quick-acting. Its effects usually start instantly after a few puffs.

In moderation, it delivers a rush of euphoria that instantly uplifts the mood during the onset. Enthusiasts bask in an innate sense of happiness as it swarms the mind with cheerful memories, inducing an upbeat disposition. Using beyond one’s personal tolerance levels, however, can lead to an upsetting experience that overwhelms the brain with racing thoughts.

A light pressure from the temples begins to form after about an hour or two. It trickles to the rest of the body as a rush of energy that invigorates users and allows one to perform or complete tasks. It has a

Overall, OCA’s Cloud 9 is a strain best used in the morning or early in the afternoon. It can be used in place of coffee as a pick me up for lazy days. Used at night, it can leave users too energized to go to bed early.

OCA’s Cloud 9 has a distinct and pungent aroma due to its potency. It has a tropical citrus scent with an undertone of wet soil and pine. Breaking it apart then combusting its buds produces a sweet herbal scent reminiscent of crushed flowers.

Inhaling OCA’s Cloud 9 coats the tongue with a tropical tang reminiscent of ripe citrus. Hints of sweet fruit line its thick herbal smoke along with a floral undertone. On the exhale, it leaves an earthy but refreshing aftertaste of pine in the mouth.

Cannabinoids inhibit saliva production. Thus, it should come as no surprise that users end up with a mild case of cottonmouth and dry eyes. It is manageable by downing a few glasses of water after the session. A more troubling concern is its ability to trigger anxiety. In worst case scenarios, it can turn into a subtle feeling of paranoia. Moderation is essential to keeping the experience pleasant.

Stress relief is one of the reasons why enthusiasts use cannabis. It has cannabinoids, such as THC, CBD, and terpenes, that ease multiple symptoms of chronic stress such as low energies, digestive problems, and the early onset of mental health issues like depression.

It has an uplifting onset that not only enhances the mood but also stabilizes intense emotions. Meanwhile, its calming euphoria appeases the overwhelming dread and anxiety caused by deadlines. Because of this, it makes for an effective anti-depressant.

Its stimulating effects rush through the muscles to relieve it of fatigue. Its painkilling properties release tension from the body to eliminate heaviness in the limbs, so users feel less tired. It also has anti-emetic features that reduce cramps in the stomach and, as such, are a source of comfort for cancer patients suffering from the nauseating effects of chemotherapy.

OCA’s Cloud 9 exhibits Sativa traits such as an elongated bud and excessive vertical growth. It also takes time to flower in the northern hemisphere due to its propensity for the warmth of the Mediterranean. Hence, it may not be the easiest plant to grow.

Outdoors, it needs extra protection against the snow during early winters as it can kill the plant overnight. Growers should also track the weather in case of heavy rains. Its lanky frame and thin branches can break into two and ruin budding sites. A temporary enclosing usually does the trick. It also keeps the batch and prevents unpredictable factors from ravaging the batch. However, one can also move it indoors.

A controllable environment offers growers the ability to manage factors like temperature, lighting, and humidity. While it may not need to be thinned out often, it will have to be topped early. Otherwise, its height will become unmanageable. Doing so will also initiate the flowering period in which growers can apply the Screen of Green method which will significantly increase yields.

OCA’s Cloud 9 has an indoor flowering period of 10 to 12 weeks. However, the long wait rewards growers between 12 to 16 ounces of buds per square meter.

In the northern hemisphere, OCA’s Cloud 9 blossoms from the middle to the last week of October. It produces at least 16 ounces of buds per plant.

Have you ever smoked or grown your own OCA’s Cloud 9? Please let me know what you think about this marijuana strain in the comments below.