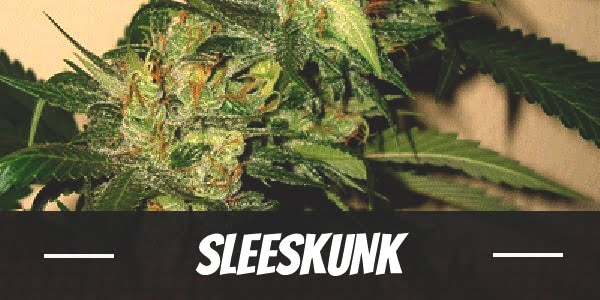 DNA Genetics ranks high among the world’s best hash producers. Most of their strains, if not all, are famed for their resin production and great effects and flavors. SleeSkunk is one such example.

Carrying the tradition, SleeSkunk produces buds heavily coated in crystal trichomes. Nothing short of spectacular, each nug sparkles like diamonds even from afar.

In creating such a breathtaking beauty, DNA Genetics took the Sativa-leaning SleeStack and paired it with the Indica dominant Skunk #1. The former influenced SleeSkunk’s mentally stimulating high. Meanwhile, it inherited its impressive resin production from the latter.

According to lab tests, SleeSkunk’s THC levels range from around 20% to 22%. Though considered a thrill seeker’s strain, beginners may still indulge in the strain. Provided, of course, they pace their consumption. After all, the bud does have the capacity to debilitate even the most seasoned of users.

With that said, SleeSkunk’s onset begins with a jolt of energy. Almost like drinking a shot of espresso, it wakes the mind and uplifts tired souls almost immediately. Used in the morning, the contagious optimism instills a sense of happiness that can last the whole day.

In time, the euphoric rush clears the mind and reinvigorates it. To casual users, the clearheaded high is a godsend. Its creative surge not only makes work less draining, it also gets the brain’s gears going.

From the temples, a tingling sensation ebbs down and blankets the body in relaxation. In waves, it courses through the muscles and loosens away tightness. Though intense, its heaviness is not of the lethargic sort.

SleeSkunk has a strong skunky fragrance complemented by subtle notes of citrus and lemon. Its undertones, however, are completely dominated by the comforting scent of wet soil. Once crushed, they emit a surprisingly nutty scent.

Carrying over to SleeSkunk’s flavor is its nutty fragrance and earthy aroma. Drawn in, its surprising notes of roast coffee with a creamy butter blend wash over the mouth. On the exhale, a cheesy aftertaste lingers.

Regardless of whether one smokes or vapes SleeSkunk, the bud will dry the eyes. And, with cannabinoids inhibiting the production of saliva, users will end up with a cottonmouth and red eyes. The effects are usually barely noticeable, but one may always rehydrate in case the dry spells gets too uncomfortable.

As a powerful Sativa-leaning strain, too much of SleeSkunk’s heady high can induce slight paranoia. This is especially possible for users with low tolerance to THC, like beginners or inexperienced users. Although rare, it is still best to pace and moderate consumption.

While its recreational value is undisputed, SleeSkunk also retains significant therapeutic value. The combined effort of its THC, CBD, and cannabinoids like terpenes, provide a reprieve against afflictions affecting the mind and the body.

Its cerebral buzz, for example, help manage depression and other mental conditions like PTSD. By clearing the mind and stabilizing the mood, it allows users to temporarily take control of their lives. Its stress-relieving properties also dispel negative thoughts. Similarly, it can be used as an anxiolytic to calm nerves.

The same psychoactive compounds also relieve aches and pains beginning from the temples. As it reaches the gastrointestinal tract, it soothes away the sudden contractions that often result in nausea. Meanwhile, its energizing high appeases both mental and physical fatigue.

Any grower can cultivate SleeSkunk with relative success. Though mostly Sativa, its growth structure is heavily influenced by its Indica genes. While its stalks are tall, they do not stretch out too far and rarely need constant height management. They are also quite sturdy and can carry the weight of its heavy nugs.

However, its Indica-leaning structure does not guarantee an easy grow. It takes the expert skill of a seasoned grower to fully unlock the strain’s potential – especially when using a hydroponics system as a medium. Their vast experience will also help keep pests and disease away.

As it matures, the plant produces dense olive-green buds that are tapered on one end. Covering it are sparse orange hairs, sticky resin, and an eye-catching coat of trichomes. Caught off-guard, one can easily mistake them for small Christmas trees.

Fortunately, DNA Genetics has made SleeSkunk’s seeds available in regular form. Because of this, growers will have to germinate more seeds to ensure more females with resin-filled calyxes.

SleeSkunk flowers faster than most Sativa-leaning strains. Indoors, it takes about 8 to 9 weeks for each square meter to produce up to 18 ounces of trichome-frosted goodness.

In well-aerated gardens with ample sunlight, each plant yields more than 16 ounces of prime buds by the second or third week of October.

Have you ever smoked or grown your own SleeSkunk? Please let me know what you think about this marijuana strain in the comments below.