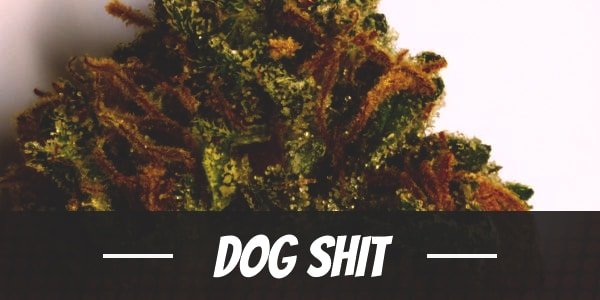 For a strain, Dog Shit is a rather weird name. After all, why would a breeder name its product after fecal matter? The answer lies in its ‘fragrance’ or, should we say, ‘odor.’ It is displeasing and absolutely unappealing.

Thankfully, its flavor bears no semblance to its namesake. Instead, it is fruity, sweet, and absolutely delicious. And, with THC levels of up to 20%, the bud induces a powerful Sativa high that is quite energizing.

In creating this strain, its original breeder used four unique landraces. Three of which are pure Sativas that lent their cerebral effects to Dog Shit. Afghani was later on added for its great performance during the growing process.

The combination of the four strains resulted in a wonderful hybrid. Perfect for daytime users, Dog Shit kills lethargy and increases productivity.

Dog Shit wastes no time in getting its users high. With just a puff or two, it uplifts tired souls with a euphoric rush that crushes away negativity. As such, it leaves users feeling happy and contented with themselves. It can even bring out one’s innate sense of confidence.

For casual users, the upbeat disposition means better productivity. Not only because it keeps stress away, but also because it prolongs focus. With a clear head, users scour through documents and projects with great curiosity and a desire to innovate.

With each toke, the mild pressure intensifies until a surge of energy courses through the body. In waves, it reinvigorates each tired limb and loosens tight muscles. Freed of all budding tension, users can move freely and complete tasks better. For this reason, Dog Shit is great daytime strain or afternoon wake-and-bake despite its unpleasant odor.

Many people get dismayed by Dog Shit’s aroma. They are not to blame though. After all, the strain’s scent is true to its name and is very off-putting. For this reason, only those who are enticed by the strangest of strains may find a liking to its fragrance.

Mimicking its scent, Dog Shit’s central flavors are fruity and citric. It can even be likened to a basket of freshly picked berries, with blueberries dominating the palate. Meanwhile, on the exhale, the spiciness is complemented by the aftertaste of wet soil.

Like all other marijuana strains, Dog Shit dries the eyes. With certain cannabinoids inhibiting the production of saliva, users end up with a cottonmouth and red eyes. Being such a common side effect, most users don’t pay heed to the dehydrating effects. But, for beginners, the dry spell can be quite uncomfortable. In such cases, it is best to hydrate with a glass of water.

Typical of potent Sativa-leaning strains, Dog Shit also induces slight paranoia and increased anxiety. This is rare, of course. Usually, as the psychedelic high slam the body, users only experience a slight headache. Regardless of whether this has something to do with individual tolerance, pacing and moderation will keep such backhanded effects at bay.

As a strain with potent cerebral effects, Dog Shit’s best use is arguably appeasing symptoms of certain mental conditions like depression or PTSD. As a natural mood enhancer, it stabilizes turbulent emotions and inspires a sense of happiness with its euphoric rush. Meanwhile, its clearheaded high calms the fast-paced thoughts of a person ridden with anxiety. Similarly, it can be used as a stress-reliever.

Dog Shit also has analgesic properties. Its soothing buzz relieves pain beginning from the temples. As it spreads, it releases tension and fatigue as well.

Because of its genetics, Dog Shit is not difficult to grow. After all, its landrace parents did spend thousands of years being exposed to harsh conditions. As such, it is a tall, resilient plant with high resistance against common diseases and sudden changes in temperature. This makes it a great choice for people who prefer cultivating their plants in gardens. Or, perhaps, for aspiring growers who would like to try their hand at outdoor growing.

In a greenhouse or grow room, Dog Shit produces less. However, there are ways to combat this. For example, imitating its natural environment using organic mediums like soil. There is also the option of placing it in a nutrient-rich hydroponic system. Regardless, both will improve yields significantly.

One of the major issues that arise with growing Dog Shit is its height. Though manageable, it can sometimes outgrow its growing space. This necessitates an early topping as well as applying techniques like super cropping or Low-Stress Training. Besides keeping it short, it encourages the plant to reach its full potential. Just one thing – odor control systems have to be put in place.

As it reaches the flowering stage, its colors lighten into a mint green. All over are flashes of dark yellow that make the trichomes seem like gold. Tapered on one end, the buds take on the shape of a spade.

At this time, though, the original breeders have not made its seeds publicly available.

Dog Shit flowers within 9 to 11 weeks with each square meter producing up to 16 ounces of frosted buds.

In a semi-humid climate, each Dog Shit plant yields more than 16 ounces of buds by the third week of October.

Have you ever smoked or grown your own Dog Shit? Please let me know what you think about this marijuana strain in the comments below.