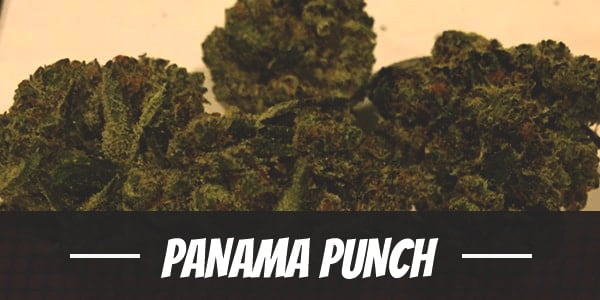 Panama Punch is famous cocktail that delights the palate. A strain of the same name has a similar effect. It has a tropical terpene profile with fruity overtones of strawberries and oranges. A whiff of its citric scent is enough to invigorate the senses.

When consumed, Panama Punch a mostly Sativa high. It has an energizing buzz that wakes both the mind and body from lethargy, and, at the same time, it uplifts the mood. Presumably, it is used mostly as a recreational strain but it also remains of significant therapeutic value to patients. It has a stress crushing buzz that restores one’s zest for life while clearing away the fatigue from long hours of work.

Breeders used Neville’s Haze, an almost pure Sativa with a potent head high, to create the base for its stimulating cerebral effects. Meanwhile, Panama Mean Green is an elusive strain. However, it is a popular choice among enthusiasts with its smoke.

Panama Punch has a quick-acting onset that starts within minutes from the first few puffs. Because of this, users should always be careful about using the strain. Its high THC levels of 17% to 19% can be debilitating when consumed beyond personal tolerance. In moderation, however, it is quite enjoyable and gratifying.

During the onset, the Sativa-leaning strain delivers an energizing onset that invigorates both the mind and the body. It leaves users floating in a cloud of euphoria that nurtures one’s inner sense of happiness. Feeling limber and upbeat, users fulfill tasks with motivation and purpose.

At the comedown, the buzzing energy is replaced by a light pressure that further releases stress. It starts at the temples before trickling down to the toes. Intensifying with each puff, it develops into a wave of relaxation that eases the muscles thoroughly. Keeping it from totally locking users to the couch, however, is the initial head high that persists for hours.

Because of its impressive wake and bake qualities, Panama Punch is best used in the morning in lieu of coffee. But, similar to a shot of espresso, it powers users throughout the day and is a great afternoon treat. Moreover, it keeps users productive.

Panama Punch has a fruity aroma that has strong overtones of strawberries and oranges. Enhancing the tropical cocktail is a spicy undertone that intensifies when the buds are broken apart. Combusting it, on the other hand, reveals its earthy smoke.

Like drinking from a fruit shake, Panama Punch is delicious strain to toke. It bursts in the mouth with a blend of strawberries and oranges. Bringing out the sweetness is the taste of spicy earth. On the exhale, it leaves tropical aftertaste that invigorates the senses.

Dryness in the eyes and the mouth is to be expected because of Panama Punch’s moisture-inhibiting cannabinoids. It is usually ignored due to its mildness, but users may also ease the discomfort by downing a few glasses of water. Practicing moderation is also necessary to keep the high pleasant. Otherwise, one may end up with raised anxiety levels.

Panama Punch has an invigorating terpene profile that enlivens the senses. Inhaling its vapor, however, activates its other cannabinoids such as CBD and THC which largely contribute to its therapeutic benefits. It delivers a restorative high that positively affects users from head to toe albeit momentarily. Still, it has a significant impact.

Its uplifting high relieves stress by improving the mood. It stabilizes turbulent emotions through its calming euphoria which also slows down the fast-paced thoughts caused by overwhelming dread. Because of this, users can use it to manage symptoms of anxiety, PTSD, and other mental health issues like depression.

It soothes redness and swelling to temporarily alleviate the pain that inflammation triggers. In doing so, it also releases tension in the muscles that can lead to painful contractions. It blankets the body in deep relaxation beginning from the temples. Meanwhile, its energizing effects relieve fatigue and tiredness in the limbs.

Panama Punch is a tropical strain that likes to bathe under the sun for long hours. It takes longer to flower in the northern hemisphere though due to its short days. However, its yields and performance are just as good. For chilly winters or heavy rains, installing a temporary enclosing will protect the batch against the harsh weather.

Indoors, growers should manage its height to keep the air and light from circulating properly. In this way, the plant can grow properly without cramping the space – leading to the development of problems such as mold or mildew. The Screen of Green method is an effective way of keeping it short. Growers can encourage lateral growth by weaving the branches into the net. Topping it is also another choice.

Soil as a medium improves its overall flavors and scents. More experienced growers may use a hydroponics setup which improves bud and trichome production while hastening yields.

Panama Punch has an indoor flowering period of 10 to 12 weeks. Once ready for harvest, it yields at least 12 to 16 ounces of buds.

Panama Punch’s flowers begin blossoming around the last week of October. Growers are encouraged to extend the flowering period up to the second or third week of November for higher yields. Each plant usually produces at least 16 ounces of buds at harvest.

Have you ever smoked or grown your own Panama Punch? Please let me know what you think about this marijuana strain in the comments below.